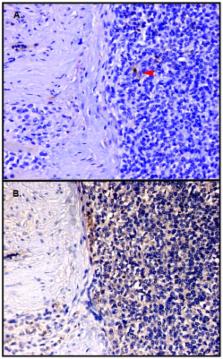 Cancer stem cells are a chemotherapy-resistant population capable of self-renewal and of regenerating the bulk tumor, thereby causing relapse and patient death. Ewing's sarcoma, the second most common form of bone tumor in adolescents and young adults, follows a clinical pattern consistent with the Cancer Stem Cell model – remission is easily achieved, even for patients with metastatic disease, but relapse remains frequent and is usually fatal.

We have isolated a subpopulation of Ewing's sarcoma cells, from both human cell lines and human xenografts grown in immune deficient mice, which express high aldehyde dehydrogenase (ALDH high) activity and are enriched for clonogenicity, sphere-formation, and tumor initiation. The ALDH high cells are resistant to chemotherapy in vitro, but this can be overcome by the ATP binding cassette transport protein inhibitor, verapamil. Importantly, these cells are not resistant to YK-4-279, a small molecule inhibitor of EWS-FLI1 that is selectively toxic to Ewing's sarcoma cells both in vitro and in vivo.

Giorgio Stassi,  Mark Diebel,  Daniel Birnbaum … (2009)
Tumors may be initiated and maintained by a cellular subcomponent that displays stem cell properties. We have used the expression of aldehyde dehydrogenase as assessed by the ALDEFLUOR assay to isolate and characterize cancer stem cell (CSC) populations in 33 cell lines derived from normal and malignant mammary tissue. Twenty-three of the 33 cell lines contained an ALDEFLUOR-positive population that displayed stem cell properties in vitro and in NOD/SCID xenografts. Gene expression profiling identified a 413-gene CSC profile that included genes known to play a role in stem cell function, as well as genes such as CXCR1/IL-8RA not previously known to play such a role. Recombinant interleukin-8 (IL-8) increased mammosphere formation and the ALDEFLUOR-positive population in breast cancer cell lines. Finally, we show that ALDEFLUOR-positive cells are responsible for mediating metastasis. These studies confirm the hierarchical organization of immortalized cell lines, establish techniques that can facilitate the characterization of regulatory pathways of CSCs, and identify potential stem cell markers and therapeutic targets.

Jeremy Fields,  Bruce M. Boman,  Hai-Zheng Huang … (2009)
Although the concept that cancers originate from stem cells (SC) is becoming scientifically accepted, mechanisms by which SC contribute to tumor initiation and progression are largely unknown. For colorectal cancer (CRC), investigation of this problem has been hindered by a paucity of specific markers for identification and isolation of SC from normal and malignant colon. Accordingly, aldehyde dehydrogenase 1 (ALDH1) was investigated as a possible marker for identifying colonic SC and for tracking them during cancer progression. Immunostaining showed that ALDH1(+) cells are sparse and limited to the normal crypt bottom, where SCs reside. During progression from normal epithelium to mutant (APC) epithelium to adenoma, ALDH1(+) cells increased in number and became distributed farther up the crypt. CD133(+) and CD44(+) cells, which are more numerous and broadly distributed in normal crypts, showed similar changes during tumorigenesis. Flow cytometric isolation of cancer cells based on enzymatic activity of ALDH (Aldefluor assay) and implantation of these cells in nonobese diabetic-severe combined immunodeficient mice (a) generated xenograft tumors (Aldefluor(-) cells did not), (b) generated them after implanting as few as 25 cells, and (c) generated them dose dependently. Further isolation of cancer cells using a second marker (CD44(+) or CD133(+) serially) only modestly increased enrichment based on tumor-initiating ability. Thus, ALDH1 seems to be a specific marker for identifying, isolating, and tracking human colonic SC during CRC development. These findings also support our original hypothesis, derived previously from mathematical modeling of crypt dynamics, that progressive colonic SC overpopulation occurs during colon tumorigenesis and drives CRC development.

Publisher ID: 10-PONE-RA-18545R1
DOI: 10.1371/journal.pone.0013943
PMC ID: 2978678
PubMed ID: 21085683
Copyright statement: Awad et al. This is an open-access article distributed under the terms of the Creative Commons Attribution License, which permits unrestricted use, distribution, and reproduction in any medium, provided the original author and source are credited.