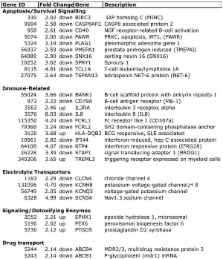 Background: Anthracyclines, such as doxorubicin (Adriamycin), are highly effective chemotherapeutic agents, but are well known to cause myocardial dysfunction and life-threatening congestive heart failure (CHF) in some patients.

Methods: To generate new hypotheses about its etiology, genome-wide transcript analysis was performed on whole blood RNA from women that received doxorubicin-based chemotherapy and either did, or did not develop CHF, as defined by ejection fractions (EF)≤40%. Women with non-ischemic cardiomyopathy unrelated to chemotherapy were compared to breast cancer patients prior to chemo with normal EF to identify heart failure-related transcripts in women not receiving chemotherapy. Byproducts of oxidative stress in plasma were measured in a subset of patients.

Results: The results indicate that patients treated with doxorubicin showed sustained elevations in oxidative byproducts in plasma. At the RNA level, women who exhibited low EFs after chemotherapy had 260 transcripts that differed >2-fold (p<0.05) compared to women who received chemo but maintained normal EFs. Most of these transcripts (201) were not altered in non-chemotherapy patients with low EFs. Pathway analysis of the differentially expressed genes indicated enrichment in apoptosis-related transcripts. Notably, women with chemo-induced low EFs had a 4.8-fold decrease in T-cell leukemia/lymphoma 1A (TCL1A) transcripts. TCL1A is expressed in both cardiac and skeletal muscle, and is a known co-activator for AKT, one of the major pro-survival factors for cardiomyocytes. Further, women who developed low EFs had a 2-fold lower level of ABCB1 transcript, encoding the multidrug resistance protein 1 (MDR1), which is an efflux pump for doxorubicin, potentially leading to higher cardiac levels of drug. In vitro studies confirmed that inhibition of MDR1 by verapamil in rat H9C2 cardiomyocytes increased their susceptibility to doxorubicin-induced toxicity.

Conclusions: It is proposed that chemo-induced cardiomyopathy may be due to a reduction in TCL1A levels, thereby causing increased apoptotic sensitivity, and leading to reduced cardiac MDR1 levels, causing higher cardiac levels of doxorubicin and intracellular free radicals. If so, screening for TCL1A and MDR1 SNPs or expression level in blood, might identify women at greatest risk of chemo-induced heart failure.

Chimerism of the transplanted heart.

Annarosa Leri,  Konrad Urbanek,  Bernardo Nadal-Ginard … (2002)
Cases in which a male patient receives a heart from a female donor provide an unusual opportunity to test whether primitive cells translocate from the recipient to the graft and whether cells with the phenotypic characteristics of those of the recipient ultimately reside in the donor heart. The Y chromosome can be used to detect migrated undifferentiated cells expressing stem-cell antigens and to discriminate between primitive cells derived from the recipient and those derived from the donor. We examined samples from the atria of the recipient and the atria and ventricles of the graft by fluorescence in situ hybridization to determine whether Y chromosomes were present in eight hearts from female donors implanted into male patients. Primitive cells bearing Y chromosomes that expressed c-kit, MDR1, and Sca-1 were also investigated. Myocytes, coronary arterioles, and capillaries that had a Y chromosome made up 7 to 10 percent of those in the donor hearts and were highly proliferative. As compared with the ventricles of control hearts, the ventricles of the transplanted hearts had markedly increased numbers of cells that were positive for c-kit, MDR1, or Sca-1. The number of primitive cells was higher in the atria of the hosts and the atria of the donor hearts than in the ventricles of the donor hearts, and 12 to 16 percent of these cells contained a Y chromosome. Undifferentiated cells were negative for markers of bone marrow origin. Progenitor cells expressing MEF2, GATA-4, and nestin (which identify the cells as myocytes) and Flk1 (which identifies the cells as endothelial cells) were identified. Our results show a high level of cardiac chimerism caused by the migration of primitive cells from the recipient to the grafted heart. Putative stem cells and progenitor cells were identified in control myocardium and in increased numbers in transplanted hearts.

Wolfgang Sadee,  Matthew D. Johnson,  Danxin Wang … (2005)
ABCB1 (multidrug resistance 1 polypeptide, MDR1, Pgp) is a multispecific efflux transporter of drugs and xenobiotics. Among numerous polymorphisms in human ABCB1, the synonymous SNP 3435C > T has been associated with decreased mRNA and protein levels, via unknown mechanisms. To search for cis-acting polymorphism affecting transcription or mRNA processing, we used 3435C > T as a marker single nucleotide polymorphism (SNP), for measuring differences in allelic mRNA expression. Ratios of allelic abundance in genomic DNA and mRNA (after conversion to cDNA) were measured quantitatively with a primer extension assay, in human liver samples. mRNA expression of the 3435C allele was significantly higher than that of the 3435T allele (3435C/3435T ratios ranging from 1.06-1.61). Cotransfection of equal amounts of ABCB1 expression plasmids containing 3435C or 3435T also revealed higher 3435C mRNA expression. Increasing 3435C/3435T ratios after cessation of transcription indicated that the 3435C > T substitution decreases mRNA stability. 3435C > T is in strong linkage disequilibrium with two other coding SNPs (1236C > T and 2677G > T) forming two abundant haplotypes (ABCB1*1 and ABCB1*13). Transfection of all possible combinations of these three SNPs demonstrated that only 3435T is associated with lower mRNA levels. Calculations of mRNA folding, using Mfold, suggested an effect on mRNA secondary structure. the abundant 3435C > T SNP appears to be a main factor in allelic variation of ABCB1 mRNA expression in the liver, by changing mRNA stability.

Muhammad Ashraf,  Shujia Jiang,  H. Kim … (2009)
MicroRNAs (miRs) participate in most cellular functions by posttranscriptional regulation of gene expression albeit with little information regarding their role in ischemic preconditioning (IP) of stem cells. We report that IP of bone marrow-derived mesenchymal stem cells (MSCs) with two cycles of 30-min ischemia/reoxygenation (I/R) supported their survival under subsequent longer exposure to anoxia and following engraftment in the infarcted heart. IP significantly reduced apoptosis in MSCs through activation of Akt (Ser(473)) and ERK1/2 (Thr(202)/Tyr(204)) and nuclear translocation of hypoxia-inducible factor-1alpha (HIF-1alpha). We observed concomitant induction of miR-210 in the preconditioned MSCs ((PC)MSCs). Inhibition of HIF-1alpha or of miR-210 abrogated the cytoprotective effects of preconditioning. Extrapolation of these data to in vivo studies in a rat model of acute myocardial infarction predominantly improved stem cell survival after engraftment with a role for miR-210. Notably, multiple I/R cycles more effectively regulated the miR-210 and hence promoted MSC survival compared with single-cycle hypoxia of an equal duration. Real time PCR array for rat apoptotic genes, computational target gene analyses, and luciferase reporter assay identified FLICE-associated huge protein (FLASH)/caspase-8-associated protein-2 (Casp8ap2) in (PC)MSCs as the target gene of miR-210. Induction of FLASH/CASP8AP2 in miR-210 knocked-down (PC)MSCs resulted in increased cell apoptosis. Taken together, these data demonstrated that cytoprotection afforded by IP was regulated by miR-210 induction via FLASH/Casp8ap2 suppression. These results highlighted that IP by multiple short episodes of I/R is a novel strategy to promote stem cell survival.

Publisher ID: ijbsv09p0350
DOI: 10.7150/ijbs.6058
PMC ID: 3638290
PubMed ID: 23630447
Copyright statement: © Ivyspring International Publisher. This is an open-access article distributed under the terms of the Creative Commons License (http://creativecommons.org/licenses/by-nc-nd/3.0/). Reproduction is permitted for personal, noncommercial use, provided that the article is in whole, unmodified, and properly cited.