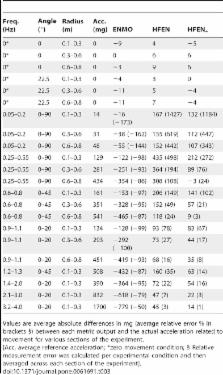 An industrial robot rotated accelerometers in the vertical plane. Radius, frequency, and angular range of motion were systematically varied. Three metrics (Euclidian norm minus one [ENMO], Euclidian norm of the high-pass filtered signals [HFEN], and HFEN plus Euclidean norm of low-pass filtered signals minus 1 g [HFEN +]) were derived for each experimental condition and compared against the reference acceleration (forward kinematics) of the robot arm. We then compared metrics derived from human acceleration signals from the wrist and hip in 97 adults (22–65 yr), and wrist in 63 women (20–35 yr) in whom daily activity-related energy expenditure (PAEE) was available.

In the robot experiment, HFEN + had lowest error during (vertical plane) rotations at an oscillating frequency higher than the filter cut-off frequency while for lower frequencies ENMO performed better. In the human experiments, metrics HFEN and ENMO on hip were most discrepant (within- and between-individual explained variance of 0.90 and 0.46, respectively). ENMO, HFEN and HFEN + explained 34%, 30% and 36% of the variance in daily PAEE, respectively, compared to 26% for a metric which did not attempt to remove the gravitational component (metric EN).

In conclusion, none of the metrics as evaluated systematically outperformed all other metrics across a wide range of standardised kinematic conditions. However, choice of metric explains different degrees of variance in daily human physical activity.

Physical activity of Canadian children and youth: accelerometer results from the 2007 to 2009 Canadian Health Measures Survey.

Rachel Colley,  Ian Janssen,  Nancy Craig … (2011)
Physical activity is an important determinant of health and fitness. This study provides contemporary estimates of the physical activity levels of Canadians aged 6 to 19 years. Data are from the 2007 to 2009 Canadian Health Measures Survey. The physical activity of a nationally representative sample was measured using accelerometers. Data are presented as time spent in sedentary, light, moderate and vigorous intensity movement, and in steps accumulated per day. An estimated 9% of boys and 4% of girls accumulate 60 minutes of moderate-to-vigorous physical activity on at least 6 days a week. Regardless of age group, boys are more active than girls. Canadian children and youth spend 8.6 hours per day-62% of their waking hours-in sedentary pursuits. Daily step counts average 12,100 for boys and 10,300 for girls. Based on objective and robust measures, physical activity levels of Canadian children and youth are low.

Assessment of physical activity in youth.

Nicholas J. Wareham,  John Steele,  Soren Brage … (2008)
Despite much progress with physical activity assessment, the limitations concerning the accurate measurement of physical activity are often amplified in young people due to the cognitive, physiological, and biomechanical changes that occur during natural growth as well as a more intermittent pattern of habitual physical activity in youth compared with adults. This mini-review describes and compares methods to assess habitual physical activity in youth and discusses main issues regarding the use and interpretation of data collected with these techniques. Self-report instruments and movement sensing are currently the most frequently used methods for the assessment of physical activity in epidemiological research; others include heart rate monitoring and multisensor systems. Habitual energy expenditure can be estimated from these input measures with varying degree of uncertainty. Nonlinear modeling techniques, using accelerometry perhaps in combination with physiological parameters like heart rate or temperature, have the greatest potential for increasing the prediction accuracy of habitual physical activity energy expenditure. Although multisensor systems may be more accurate, this must be balanced against feasibility, a balance that shifts with technological and scientific advances and should be considered at the beginning of every new study.

R Sabatini (2006)
In this paper, a quaternion based extended Kalman filter (EKF) is developed for determining the orientation of a rigid body from the outputs of a sensor which is configured as the integration of a tri-axis gyro and an aiding system mechanized using a tri-axis accelerometer and a tri-axis magnetometer. The suggested applications are for studies in the field of human movement. In the proposed EKF, the quaternion associated with the body rotation is included in the state vector together with the bias of the aiding system sensors. Moreover, in addition to the in-line procedure of sensor bias compensation, the measurement noise covariance matrix is adapted, to guard against the effects which body motion and temporary magnetic disturbance may have on the reliability of measurements of gravity and earth's magnetic field, respectively. By computer simulations and experimental validation with human hand orientation motion signals, improvements in the accuracy of orientation estimates are demonstrated for the proposed EKF, as compared with filter implementations where either the in-line calibration procedure, the adaptive mechanism for weighting the measurements of the aiding system sensors, or both are not implemented.

Competing Interests: Vincent van Hees, who led on this manuscript, was funded by a BBSRC industry-CASE studentship. This studentship came with funding from both the BBSRC and an industry partner, Unilever Discover Ltd in this case ( http://www.bbsrc.ac.uk/web/FILES/Guidelines/studentship_handbook.pdf). Unilever Discover Ltd had no involvement in the study as presented and was only informed about progress and final results. This does not alter the authors' adherence to all the PLOS ONE policies on sharing data and materials.

The Medical Research Council funded the study (MC_U106179473). VVH was funded by a BBSRC industry CASE studentship (Unilever, UK). The Doubly labelled water pat of the study was supported by Grants from LifeGene (Torsten and Ragnar Söderbergs Foundation), Fredrik and Ingrid Thurings Foundation, Umeå University Young Investigator’s Award, and the Västerbottens regional health authority (all grants to PWF). GENEA monitors in the Swedish study were loaned pro gratis from Unilever Discover Ltd. The funders had no role in study design, data collection and analysis, decision to publish, or preparation of the manuscript.