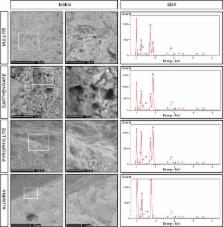 Microbial fuel cells (MFCs) made with different types of ceramic membranes were investigated to find a low‐cost alternative to commercially available proton exchange membranes. The MFCs operated with fresh human urine as the fuel. Pyrophyllite and earthenware produced the best performance to reach power densities of 6.93 and 6.85 W m −3, respectively, whereas mullite and alumina achieved power densities of 4.98 and 2.60 W m −3, respectively. The results indicate the dependence of bio‐film growth and activity on the type of ceramic membrane applied. The most favourable conditions were created in earthenware MFCs. The performance of the ceramic membranes was related to their physical and chemical properties determined by environmental scanning electron microscopy and energy dispersive X‐ray spectroscopy. The cost of mullite, earthenware, pyrophyllite and alumina was estimated to be 13.61, 4.14, 387.96 and 177.03 GBP m −2, respectively. The results indicate that earthenware and mullite are good substitutes for commercially available proton exchange membranes, which makes the MFC technology accessible in developing countries.

Juan Xu,  Guo-Ping Sheng,  Hong-Wei Luo … (2012)
The fouling characteristics of proton exchange membrane (PEM) in microbial fuel cell (MFC) and the resulting deterioration of MFC performance were explored in this study. It was observed that the ion exchange capacity, conductivity and diffusion coefficients of cations of PEM were reduced significantly after fouling. Imaging analysis coupled with FTIR analysis indicated that the fouling layer attached on PEM consisted of microorganisms encased in extracellular polymers and inorganic salt precipitations. The results clearly demonstrate that PEM fouling deteriorated the performance of MFCs and led to a decrease in electricity generation. Cation transfer limitation might play an important role in the deterioration of MFC performance because of the membrane fouling. This was attributed to the physical blockage of charge transfer in the MFC resulted from the membrane fouling. With the experimental results, the effect of membrane fouling on the electrical generation of MFCs was evaluated. It was found that the decreased diffusion coefficients of cations and cathodic potential loss after membrane fouling contributed mainly to the deterioration of the MFC performance.

Suzanne T Read,  Paritam Dutta,  Phillip L Bond … (2010)
Background Microbial fuel cells (MFCs) rely on electrochemically active bacteria to capture the chemical energy contained in organics and convert it to electrical energy. Bacteria develop biofilms on the MFC electrodes, allowing considerable conversion capacity and opportunities for extracellular electron transfer (EET). The present knowledge on EET is centred around two Gram-negative models, i.e. Shewanella and Geobacter species, as it is believed that Gram-positives cannot perform EET by themselves as the Gram-negatives can. To understand how bacteria form biofilms within MFCs and how their development, structure and viability affects electron transfer, we performed pure and co-culture experiments. Results Biofilm viability was maintained highest nearer the anode during closed circuit operation (current flowing), in contrast to when the anode was in open circuit (soluble electron acceptor) where viability was highest on top of the biofilm, furthest from the anode. Closed circuit anode Pseudomonas aeruginosa biofilms were considerably thinner compared to the open circuit anode (30 ± 3 μm and 42 ± 3 μm respectively), which is likely due to the higher energetic gain of soluble electron acceptors used. The two Gram-positive bacteria used only provided a fraction of current produced by the Gram-negative organisms. Power output of co-cultures Gram-positive Enterococcus faecium and either Gram-negative organisms, increased by 30-70% relative to the single cultures. Over time the co-culture biofilms segregated, in particular, Pseudomonas aeruginosa creating towers piercing through a thin, uniform layer of Enterococcus faecium. P. aeruginosa and E. faecium together generated a current of 1.8 ± 0.4 mA while alone they produced 0.9 ± 0.01 and 0.2 ± 0.05 mA respectively. Conclusion We postulate that this segregation may be an essential difference in strategy for electron transfer and substrate capture between the Gram-negative and the Gram-positive bacteria used here.

Xiuping Zhu,  Justin Tokash,  Yiying Hong … (2013)
Power density curves for microbial fuel cells (MFCs) often show power overshoot, resulting in inaccurate estimation of MFC performance at high current densities. The reasons for power overshoot are not well understood, but biofilm acclimation and development are known factors. In order to better explore the reasons for power overshoot, exoelectrogenic biofilms were developed at four different anode potentials (-0.46 V, -0.24 V, 0 V, and 0.50 V vs. Ag/AgCl), and then the properties of the biofilms were examined using polarization tests and cyclic voltammetry (CV). The maximum power density of the MFCs was 1200±100 mW/m(2). Power overshoot was observed in MFCs incubated at -0.46 V, but not those acclimated at more positive potentials, indicating that bacterial activity was significantly influenced by the anode acclimation potential. CV results further indicated that power overshoot of MFCs incubated at the lowest anode potential was associated with a decreasing electroactivity of the anodic biofilm in the high potential region, which resulted from a lack of sufficient electron transfer components to shuttle electrons at rates needed for these more positive potentials.