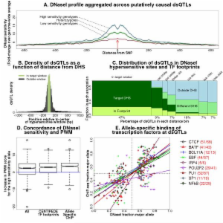 The mapping of expression quantitative trait loci (eQTLs) has emerged as an important tool for linking genetic variation to changes in gene regulation 1- 5 . However, it remains difficult to identify the causal variants underlying eQTLs and little is known about the regulatory mechanisms by which they act. To address this gap, we used DNaseI sequencing to measure chromatin accessibility in 70 Yoruba lymphoblastoid cell lines (LCLs), for which genome-wide genotypes and estimates of gene expression levels are also available 6- 8 . We obtained a total of 2.7 billion uniquely mapped DNase-seq reads, which allowed us to produce genome-wide maps of chromatin accessibility for each individual. We identified 9,595 locations at which DNase-seq read depth correlates significantly with genotype at a nearby SNP or indel (FDR=10%). We call such variants “DNaseI sensitivity Quantitative Trait Loci” (dsQTLs). We found that dsQTLs are strongly enriched within inferred transcription factor binding sites and are frequently associated with allele-specific changes in transcription factor binding. A substantial fraction (16%) of dsQTLs are also associated with variation in the expression levels of nearby genes, (namely, these loci are also classified as eQTLs). Conversely, we estimate that as many as 55% of eQTL SNPs are also dsQTLs. Our observations indicate that dsQTLs are highly abundant in the human genome, and are likely to be important contributors to phenotypic variation.

A map of human genome variation from population-scale sequencing.

Gonçalo R Abecasis,  David Altshuler,  Adam Auton … (2011)
The 1000 Genomes Project aims to provide a deep characterization of human genome sequence variation as a foundation for investigating the relationship between genotype and phenotype. Here we present results of the pilot phase of the project, designed to develop and compare different strategies for genome-wide sequencing with high-throughput platforms. We undertook three projects: low-coverage whole-genome sequencing of 179 individuals from four populations; high-coverage sequencing of two mother-father-child trios; and exon-targeted sequencing of 697 individuals from seven populations. We describe the location, allele frequency and local haplotype structure of approximately 15 million single nucleotide polymorphisms, 1 million short insertions and deletions, and 20,000 structural variants, most of which were previously undescribed. We show that, because we have catalogued the vast majority of common variation, over 95% of the currently accessible variants found in any individual are present in this data set. On average, each person is found to carry approximately 250 to 300 loss-of-function variants in annotated genes and 50 to 100 variants previously implicated in inherited disorders. We demonstrate how these results can be used to inform association and functional studies. From the two trios, we directly estimate the rate of de novo germline base substitution mutations to be approximately 10(-8) per base pair per generation. We explore the data with regard to signatures of natural selection, and identify a marked reduction of genetic variation in the neighbourhood of genes, due to selection at linked sites. These methods and public data will support the next phase of human genetic research.

A second generation human haplotype map of over 3.1 million SNPs.

Haoran Hu,  Weitao Hu,  Chaohua Li … (2007)
We describe the Phase II HapMap, which characterizes over 3.1 million human single nucleotide polymorphisms (SNPs) genotyped in 270 individuals from four geographically diverse populations and includes 25-35% of common SNP variation in the populations surveyed. The map is estimated to capture untyped common variation with an average maximum r2 of between 0.9 and 0.96 depending on population. We demonstrate that the current generation of commercial genome-wide genotyping products captures common Phase II SNPs with an average maximum r2 of up to 0.8 in African and up to 0.95 in non-African populations, and that potential gains in power in association studies can be obtained through imputation. These data also reveal novel aspects of the structure of linkage disequilibrium. We show that 10-30% of pairs of individuals within a population share at least one region of extended genetic identity arising from recent ancestry and that up to 1% of all common variants are untaggable, primarily because they lie within recombination hotspots. We show that recombination rates vary systematically around genes and between genes of different function. Finally, we demonstrate increased differentiation at non-synonymous, compared to synonymous, SNPs, resulting from systematic differences in the strength or efficacy of natural selection between populations.

Hana Lango Allen,  Karol Estrada,  Guillaume Lettre … (2010)
Most common human traits and diseases have a polygenic pattern of inheritance: DNA sequence variants at many genetic loci influence phenotype. Genome-wide association (GWA) studies have identified >600 variants associated with human traits1, but these typically explain small fractions of phenotypic variation, raising questions about the utility of further studies. Here, using 183,727 individuals, we show that hundreds of genetic variants, in at least 180 loci, influence adult height, a highly heritable and classic polygenic trait2,3. The large number of loci reveals patterns with important implications for genetic studies of common human diseases and traits. First, the 180 loci are not random, but instead are enriched for genes that are connected in biological pathways (P=0.016), and that underlie skeletal growth defects (P<0.001). Second, the likely causal gene is often located near the most strongly associated variant: in 13 of 21 loci containing a known skeletal growth gene, that gene was closest to the associated variant. Third, at least 19 loci have multiple independently associated variants, suggesting that allelic heterogeneity is a frequent feature of polygenic traits, that comprehensive explorations of already-discovered loci should discover additional variants, and that an appreciable fraction of associated loci may have been identified. Fourth, associated variants are enriched for likely functional effects on genes, being over-represented amongst variants that alter amino acid structure of proteins and expression levels of nearby genes. Our data explain ∼10% of the phenotypic variation in height, and we estimate that unidentified common variants of similar effect sizes would increase this figure to ∼16% of phenotypic variation (∼20% of heritable variation). Although additional approaches are needed to fully dissect the genetic architecture of polygenic human traits, our findings indicate that GWA studies can identify large numbers of loci that implicate biologically relevant genes and pathways.