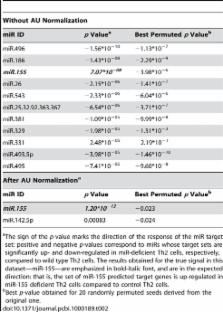 Elucidation of regulatory roles played by microRNAs (miRs) in various biological networks is one of the greatest challenges of present molecular and computational biology. The integrated analysis of gene expression data and 3′-UTR sequences holds great promise for being an effective means to systematically delineate active miRs in different biological processes. Applying such an integrated analysis, we uncovered a striking relationship between 3′-UTR AU content and gene response in numerous microarray datasets. We show that this relationship is secondary to a general bias that links gene response and probe AU content and reflects the fact that in the majority of current arrays probes are selected from target transcript 3′-UTRs. Therefore, removal of this bias, which is in order in any analysis of microarray datasets, is of crucial importance when integrating expression data and 3′-UTR sequences to identify regulatory elements embedded in this region. We developed visualization and normalization schemes for the detection and removal of such AU biases and demonstrate that their application to microarray data significantly enhances the computational identification of active miRs. Our results substantiate that, after removal of AU biases, mRNA expression profiles contain ample information which allows in silico detection of miRs that are active in physiological conditions.

MicroRNAs are a novel class of genes that encodes for short RNA molecules recognized to play key roles in the regulation of many biological networks. MicroRNAs, predicted to collectively target more than 30% of all human protein-coding genes, suppress gene expression by binding to regulatory elements usually embedded in the 3′-UTRs of their target mRNAs. Despite intensive efforts in recent years, biological functions carried out by microRNAs have been characterized for only a small number of these genes, making elucidation of their roles one of the greatest challenges of biology today. Bioinformatics analyses can significantly help meet this challenge. In particular, the integrated analysis of microarray mRNA expression data and 3′-UTR sequences holds great promise for systematic dissection of regulatory networks controlled by microRNAs. Applying such integrated analysis to numerous microarray datasets, we disclosed a major technical bias that hampers the identification of active microRNAs from mRNA expression profiles. We developed visualization and normalization schemes for detection and removal of the bias and demonstrate that their application to microarray data significantly enhances the identification of active microRNAs. Given the broad use of microarrays and the ever-growing interest in microRNAs, we anticipate that the methods we introduced will be widely adopted.

Y. H. Yang (2002)
There are many sources of systematic variation in cDNA microarray experiments which affect the measured gene expression levels (e.g. differences in labeling efficiency between the two fluorescent dyes). The term normalization refers to the process of removing such variation. A constant adjustment is often used to force the distribution of the intensity log ratios to have a median of zero for each slide. However, such global normalization approaches are not adequate in situations where dye biases can depend on spot overall intensity and/or spatial location within the array. This article proposes normalization methods that are based on robust local regression and account for intensity and spatial dependence in dye biases for different types of cDNA microarray experiments. The selection of appropriate controls for normalization is discussed and a novel set of controls (microarray sample pool, MSP) is introduced to aid in intensity-dependent normalization. Lastly, to allow for comparisons of expression levels across slides, a robust method based on maximum likelihood estimation is proposed to adjust for scale differences among slides.

Nikolaus Rajewsky (2006)
In recent years, microRNAs (miRNAs) have emerged as a major class of regulatory genes, present in most metazoans and important for a diverse range of biological functions. Because experimental identification of miRNA targets is difficult, there has been an explosion of computational target predictions. Although the initial round of predictions resulted in very diverse results, subsequent computational and experimental analyses suggested that at least a certain class of conserved miRNA targets can be confidently predicted and that this class of targets is large, covering, for example, at least 30% of all human genes when considering about 60 conserved vertebrate miRNA gene families. Most recent approaches have also shown that there are correlations between domains of miRNA expression and mRNA levels of their targets. Our understanding of miRNA function is still extremely limited, but it may be that by integrating mRNA and miRNA sequence and expression data with other comparative genomic data, we will be able to gain global and yet specific insights into the function and evolution of a broad layer of post-transcriptional control.

Publisher ID: 08-PLCB-RA-0171R3
DOI: 10.1371/journal.pcbi.1000189
PMC ID: 2533120
PubMed ID: 18833292
Copyright statement: Elkon, Agami. This is an open-access article distributed under the terms of the Creative Commons Attribution License, which permits unrestricted use, distribution, and reproduction in any medium, provided the original author and source are credited.