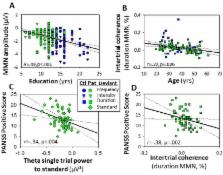 Stefan Debener,  Scott Makeig,  Arnaud Delorme … (2004)
This article provides a new, more comprehensive view of event-related brain dynamics founded on an information-based approach to modeling electroencephalographic (EEG) dynamics. Most EEG research focuses either on peaks 'evoked' in average event-related potentials (ERPs) or on changes 'induced' in the EEG power spectrum by experimental events. Although these measures are nearly complementary, they do not fully model the event-related dynamics in the data, and cannot isolate the signals of the contributing cortical areas. We propose that many ERPs and other EEG features are better viewed as time/frequency perturbations of underlying field potential processes. The new approach combines independent component analysis (ICA), time/frequency analysis, and trial-by-trial visualization that measures EEG source dynamics without requiring an explicit head model.

Lisa Grace,  Lawrence W. Green,  Daniel Javitt … (2008)
Many risk genes interact synergistically to produce schizophrenia and many neurotransmitter interactions have been implicated. We have developed a circuit-based framework for understanding gene and neurotransmitter interactions. NMDAR hypofunction has been implicated in schizophrenia because NMDAR antagonists reproduce symptoms of the disease. One action of antagonists is to reduce the excitation of fast-spiking interneurons, resulting in disinhibition of pyramidal cells. Overactive pyramidal cells, notably those in the hippocampus, can drive a hyperdopaminergic state that produces psychosis. Additional aspects of interneuron function can be understood in this framework, as follows. (i) In animal models, NMDAR antagonists reduce parvalbumin and GAD67, as found in schizophrenia. These changes produce further disinhibition and can be viewed as the aberrant response of a homeostatic system having a faulty activity sensor (the NMDAR). (ii) Disinhibition decreases the power of gamma oscillation and might thereby produce negative and cognitive symptoms. (iii) Nicotine enhances the output of interneurons, and might thereby contribute to its therapeutic effect in schizophrenia.

From revolution to evolution: the glutamate hypothesis of schizophrenia and its implication for treatment.

Daniel Javitt,  Bita Moghaddam (2011)
Glutamate is the primary excitatory neurotransmitter in mammalian brain. Disturbances in glutamate-mediated neurotransmission have been increasingly documented in a range of neuropsychiatric disorders including schizophrenia, substance abuse, mood disorders, Alzheimer's disease, and autism-spectrum disorders. Glutamatergic theories of schizophrenia are based on the ability of N-methyl-D-aspartate receptor (NMDAR) antagonists to induce schizophrenia-like symptoms, as well as emergent literature documenting disturbances of NMDAR-related gene expression and metabolic pathways in schizophrenia. Research over the past two decades has highlighted promising new targets for drug development based on potential pre- and postsynaptic, and glial mechanisms leading to NMDAR dysfunction. Reduced NMDAR activity on inhibitory neurons leads to disinhibition of glutamate neurons increasing synaptic activity of glutamate, especially in the prefrontal cortex. Based on this mechanism, normalizing excess glutamate levels by metabotropic glutamate group 2/3 receptor agonists has led to potential identification of the first non-monoaminergic target with comparable efficacy as conventional antipsychotic drugs for treating positive and negative symptoms of schizophrenia. In addition, NMDAR has intrinsic modulatory sites that are active targets for drug development, several of which show promise in preclinical/early clinical trials targeting both symptoms and cognition. To date, most studies have been done with orthosteric agonists and/or antagonists at specific sites. However, allosteric modulators, both positive and negative, may offer superior efficacy with less danger of downregulation.