Injection device-related risk management toward safe administration of medications: experience in a university teaching hospital in The People’s Republic of China 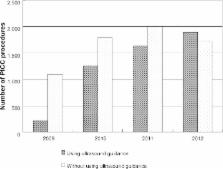 The use of injection devices to administer intravenous or subcutaneous medications is common practice throughout a variety of health care settings. Studies suggest that one-half of all harmful medication errors originate during drug administration; of those errors, about two-thirds involve injectables. Therefore, injection device management is pivotal to safe administration of medications. In this article, the authors summarize the relevant experiences by retrospective analysis of injection device-related near misses and adverse events in the Second Affiliated Hospital of Zhejiang University, School of Medicine, Zhejiang University, People’s Republic of China. Injection device-related near misses and adverse events comprised the following: 1) improper selection of needle diameter for subcutaneous injection, material of infusion sets, and pore size of in-line filter; 2) complications associated with vascular access; 3) incidents induced by absence of efficient electronic pump management and infusion tube management; and 4) liquid leakage of chemotherapeutic infusion around the syringe needle. Safe injection drug use was enhanced by multidisciplinary collaboration, especially among pharmacists and nurses; drafting of clinical pathways in selection of vascular access; application of approaches such as root cause analysis using a fishbone diagram; plan–do–check–act and quality control circle; and construction of a culture of spontaneous reporting of near misses and adverse events. Pharmacists must be professional in regards to medication management and use. The depth, breadth, and efficiency of cooperation between nurses and pharmacists are pivotal to injection safety.

D Bates,  N Spell,  D J Cullen … (2015)
To assess the additional resource utilization associated with an adverse drug event (ADE). Nested case-control study within a prospective cohort study. The cohort included 4108 admissions to a stratified random sample of 11 medical and surgical units in 2 tertiary-care hospitals over a 6-month period. Cases were patients with an ADE, and the control for each case was the patient on the same unit as the case with the most similar pre-event length of stay. Postevent length of stay and total costs. Incidents were detected by self-report stimulated by nurses and pharmacists and by daily chart review, and were classified as to whether they represented ADEs. Information on length of stay and charges was obtained from billing data, and costs were estimated by multiplying components of charges times hospital-specific ratios of costs to charges. During the study period, there were 247 ADEs among 207 admissions. After outliers and multiple episodes were excluded, there were 190 ADEs, of which 60 were preventable. In paired regression analyses adjusting for multiple factors, including severity, comorbidity, and case mix, the additional length of stay associated with an ADE was 2.2 days (P=.04), and the increase in cost associated with an ADE was $3244 (P=.04). For preventable ADEs, the increases were 4.6 days in length of stay (P=.03) and $5857 in total cost (P=.07). After adjusting for our sampling strategy, the estimated postevent costs attributable to an ADE were $2595 for all ADEs and $4685 for preventable ADEs. Based on these costs and data about the incidence of ADEs, we estimate that the annual costs attributable to all ADEs and preventable ADEs for a 700-bed teaching hospital are $5.6 million and $2.8 million, respectively. The substantial costs of ADEs to hospitals justify investment in efforts to prevent these events. Moreover, these estimates are conservative because they do not include the costs of injuries to patients or malpractice costs.

Lars Arendt-Nielsen,  Henrik Egekvist,  Peter Bjerring (2015)
Needle injections are used daily by millions of people around the world for the administration of various drugs (e.g., insulin), venepuncture, and some neurophysiological procedures. The aim of this paper was to study the influence of the outer needle diameter on the pain evoked by controlled needle insertion. An automated needle injection system was used to perform a series of insertions where velocity, angle of insertion, and depth of injection were controlled. The frequency of pain following needle insertions (23G, 27G, 30G, 32G) was recorded together with the pain intensity (measured using the visual analogue scale--VAS) and the occurrence of bleeding. The outer needle diameter was positively and significantly correlated to the frequency of the insertion pain; for example, 63% of insertions with 23G needles caused pain, 53% of insertions with 27G and 31% of insertions with the thinnest (32G) needle (p < 0.0001) caused pain. The thickest needle caused most insertions associated with bleeding. Bleeding insertions were approximately 1.3 times more painful (as indicated by VAS scores) than insertions without concomitant bleedings (p = 0.004). By decreasing the outer diameter of a needle, the frequency of insertion pain can be reduced and may encourage patients to adhere to demanding injection regimens such as recurrent insulin administration.