Leukocyte Cell‐Derived Chemotaxin‐2: It's Role in Pathophysiology and Future in Clinical Medicine 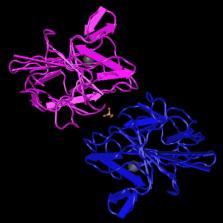 Dipeptidyl peptidase-4 inhibitors in the treatment of type 2 diabetes: a comparative review.

C F Deacon (2011)
The dipeptidyl peptidase (DPP)-4 inhibitors are a new class of antihyperglycaemic agents which were developed for the treatment of type 2 diabetes by rational drug design, based on an understanding of the underlying mechanism of action and knowledge of the structure of the target enzyme. Although they differ in terms of their chemistry, they are all small molecules which are orally available. There are some differences between them in terms of their absorption, distribution, metabolism and elimination, as well as in their potency and duration of action, but their efficacy, both in terms of inhibiting plasma DPP-4 activity and as antidiabetic agents, appears to be similar. They improve glycaemic control, reducing both fasting and postprandial glucose levels to lower HbA1c levels, without weight gain and with an apparently benign adverse event profile. At present, there seems to be little to distinguish between the different inhibitors in terms of their efficacy as antidiabetic agents and their safety. Long-term accumulated clinical experience will reveal whether compound-related characteristics lead to any clinically relevant differences. © 2010 Blackwell Publishing Ltd.

Oncogenic β-catenin triggers an inflammatory response that determines the aggressiveness of hepatocellular carcinoma in mice.

Véronique Baud, Satoshi Yamagoe, Benoît Terris … (2012)
Hepatocellular carcinoma (HCC) is the third leading cause of cancer-related death worldwide. Its pathogenesis is frequently linked to liver inflammation. Gain-of-function mutations in the gene encoding β-catenin are frequent genetic modifications found in human HCCs. Thus, we investigated whether inflammation was a component of β-catenin-induced tumorigenesis using genetically modified mouse models that recapitulated the stages of initiation and progression of this tumoral process. Oncogenic β-catenin signaling was found to induce an inflammatory program in hepatocytes that involved direct transcriptional control by β-catenin and activation of the NF-κB pathway. This led to a specific inflammatory response, the intensity of which determined the degree of tumor aggressiveness. The chemokine-like chemotactic factor leukocyte cell-derived chemotaxin 2 (LECT2) and invariant NKT (iNKT) cells were identified as key interconnected effectors of liver β-catenin-induced inflammation. In genetic deletion models lacking the gene encoding LECT2 or iNKT cells, hepatic β-catenin signaling triggered the formation of highly malignant HCCs with lung metastasis. Thus, our results identify inflammation as a key player in β-catenin-induced liver tumorigenesis. We provide strong evidence that, by activating pro- and antiinflammatory mediators, β-catenin signaling produces an inflammatory microenvironment that has an impact on tumoral development. Our data are consistent with the fact that most β-catenin-activated HCCs are of better prognosis.

LECT2 functions as a hepatokine that links obesity to skeletal muscle insulin resistance.

Fei Lan, Hirofumi Misu, Keita Chikamoto … (2014)
Recent articles have reported an association between fatty liver disease and systemic insulin resistance in humans, but the causal relationship remains unclear. The liver may contribute to muscle insulin resistance by releasing secretory proteins called hepatokines. Here we demonstrate that leukocyte cell-derived chemotaxin 2 (LECT2), an energy-sensing hepatokine, is a link between obesity and skeletal muscle insulin resistance. Circulating LECT2 positively correlated with the severity of both obesity and insulin resistance in humans. LECT2 expression was negatively regulated by starvation-sensing kinase adenosine monophosphate-activated protein kinase in H4IIEC hepatocytes. Genetic deletion of LECT2 in mice increased insulin sensitivity in the skeletal muscle. Treatment with recombinant LECT2 protein impaired insulin signaling via phosphorylation of Jun NH2-terminal kinase in C2C12 myocytes. These results demonstrate the involvement of LECT2 in glucose metabolism and suggest that LECT2 may be a therapeutic target for obesity-associated insulin resistance.