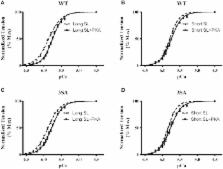 The cellular basis of the length-tension relation in cardiac muscle.

Nicholas D Allen, Megan J Kentish (1985)
The relation between muscle length or sarcomere length and developed tension for lengths up to the optimal for contraction (Lmax) is much steeper in cardiac muscle than in skeletal muscle. The steepness of the cardiac length--tension relation arises because the degree of activation of the cardiac myofibrils by calcium increases as muscle length is increased. Two processes contribute to this length-dependence of activation: (i) the calcium sensitivity of the myofibrils increases with muscle length and (ii) the amount of calcium supplied to the myofibrils during systole increases with muscle length. Of these two, the change in calcium sensitivity is the most clearly defined and is responsible for a large part of the rapid change in developed tension when muscle length is altered. It is likely that this change in calcium sensitivity is due to a change in the affinity of troponin for calcium but the underlying mechanism has not been identified. There is good evidence that changes in the calcium supply to the myofibrils can account for the slow changes in tension that follow an alteration in length; there may also be rapid changes in calcium supply but this is less clearly established at present.

R K Simmons, A HUXLEY, Mandy L. Ford (1977)
1. Apparatus for applying a step change of length to an isolated muscle fibre is described. The step was complete in about 0.2 ms.2. Effects of tendon compliance were eliminated by using a spot-follower device and by gripping the tendons with metal clips close to the fibre ends.3. The natural frequency of the force transducer was above 10 kHz.4. Steps of various amplitudes and in either direction were applied to isolated muscle fibres about 6 mm long from the anterior tibial muscle of Rana temporaria during tetanic stimulation. Initial sarcomere length was 2.0-2.2 mum, and temperature was 0-3 degrees C.5. The tension response to a step could be divided into four phases. The initial response was an apparently elastic change during the step itself (phase 1). After the step was completed there was a rapid partial recovery towards the original tension (phase 2, lasting 2-5 ms), followed by a slowing or reversal of recovery (phase 3, 10-50 ms), and finally a much slower return to the original tension (phase 4). Most of this paper is concerned with phases 1 and 2.6. The initial tension change (phase 1) occurred synchronously with the applied length change, indicating that the fibres possess a compliance which is almost linear and almost undamped. Its stiffness is such that an instantaneous shortening of about 4 nm per half-sarcomere would bring the tension to zero from its isometric value.7. The absence of detectable damping during phase 1 indicates that the viscosity of a stimulated fibre is substantially less than the apparent viscosity of a fibre at rest.8. The instantaneous force-extension curve approached the length axis at a sharp angle and a negative tension appeared at the force transducer when a very large step was applied. These observations suggest that the structures responsible for the stiffness of the fibre remain rigid when they are not under tension.9. During the few milliseconds after the step (phase 2) the tension recovered part of the way toward the level which existed before the step. In shortening steps the time course of this recovery was adequately fitted by the sum of four exponential terms, and was similar in steps of different amplitude but with a time scale shorter the larger the step. In stretches the slow components were relatively larger than in releases.10. The tension level, T(2), approached during phase 2 depended only on the total amplitude of the step and not on the time course of the length change, provided it was complete in 1-2 ms. The extreme tension reached during a step could thus vary widely without detectable change in T(2).11. With stretches and releases of up to about 3 nm per half-sarcomere this early recovery was almost complete, so that the curve of T(2) against step amplitude was nearly horizontal. With larger releases the line curved downwards, reaching zero in a release of about 14 nm per half-sarcomere.12. When the temperature was raised both the developed tension and the stiffness increased, but the relative increase was greater for tension than for stiffness. The amount of instantaneous shortening needed to bring tension to zero was therefore also increased.13. A set of empirical equations is given which describe adequately the first few milliseconds of the tension change in response to any imposed time course of shortening.14. The rapid elasticity and early tension recovery resemble the response of a combination of two elastic components and one viscous component. Reasons are given for preferring an interpretation in terms of an undamped compliance in series with a damped compliance (Voigt element) rather than an undamped elasticity in parallel with a series combination of viscous and elastic components (Maxwell element).15. The rapid compliance does not correspond to the ;series elastic component' of two-component theories of muscle contraction.

Rate of force generation in muscle: correlation with actomyosin ATPase activity in solution.

Marla E Eisenberg, Michael B Brenner (1986)
Crossbridge models of muscle contraction based on biochemical studies predict that there may be a relationship between the rate-limiting step in the actomyosin ATPase cycle in vitro and the rate of force development in vivo. In the present study, we measured the rate of force redevelopment in skinned rabbit muscle fibers following unloaded isotonic shortening and a rapid restretch. For comparison, ATPase activity was measured under identical conditions, using myosin subfragment-1 chemically crosslinked to actin. We found that the time course of force redevelopment is well fitted by a single exponential function, implying that force redevelopment is a first-order process, described by a single rate constant. The magnitude of this rate constant is in close agreement with the rate constant necessary to simulate the experimental force-velocity relation on the basis of a crossbridge model of the type proposed by A. F. Huxley in 1957. In addition, the observed close correlation between the rate constant for force redevelopment and the maximal actin-activated actomyosin ATPase rate under a variety of conditions suggests that the step that determines the rate of force generation in the crossbridge cycle may be the physiological equivalent of the rate-limiting step in the actomyosin ATPase cycle in solution.

This article was submitted to Striated Muscle Physiology, a section of the journal Frontiers in Physiology