Organic mononitrites of 1,2-propanediol act as an effective NO-releasing vasodilator in pulmonary hypertension and exhibit no cross-tolerance with nitroglycerin in anesthetized pigs 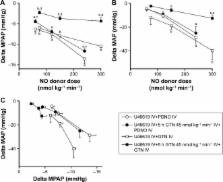 Clinically available intravenous (IV) nitric oxide (NO) donor drugs such as nitroglycerin (GTN) cause systemic hypotension and/or tolerance development. In a porcine model, novel NO donor compounds – the organic mononitrites of 1,2-propanediol (PDNO) – were compared to GTN with regard to pulmonary selectivity and tolerance development. The vasodilatory effects of inorganic nitrite were investigated.

PDNO is a vasodilator with selectivity for pulmonary circulation exhibiting no cross-tolerance to GTN, but GTN causes non selective vasodilatation with substantial tolerance development in the pulmonary and systemic circulations. Inorganic nitrite has no vasodilatory properties at relevant doses.

Identification of the enzymatic mechanism of nitroglycerin bioactivation.

Jian Zhang Quan,  Zhiqiang Chen,  Jonathan Stamler (2002)
Nitroglycerin (glyceryl trinitrate, GTN), originally manufactured by Alfred Nobel, has been used to treat angina and heart failure for over 130 years. However, the molecular mechanism of GTN biotransformation has remained a mystery and it is not well understood why "tolerance" (i.e., loss of clinical efficacy) manifests over time. Here we purify a nitrate reductase that specifically catalyzes the formation of 1,2-glyceryl dinitrate and nitrite from GTN, leading to production of cGMP and relaxation of vascular smooth muscle both in vitro and in vivo, and we identify it as mitochondrial aldehyde dehydrogenase (mtALDH). We also show that mtALDH is inhibited in blood vessels made tolerant by GTN. These results demonstrate that the biotransformation of GTN occurs predominantly in mitochondria through a novel reductase action of mtALDH and suggest that nitrite is an obligate intermediate in generation of NO bioactivity. The data also indicate that attenuated biotransformation of GTN by mtALDH underlies the induction of nitrate tolerance. More generally, our studies provide new insights into subcellular processing of NO metabolites and suggest new approaches to generating NO bioactivity and overcoming nitrate tolerance.

Daniel G. Miller,  Ian Megson (2007)
During the 1980s, the free radical, nitric oxide (NO), was discovered to be a crucial signalling molecule, with wide-ranging functions in the cardiovascular, nervous and immune systems. Aside from providing a credible explanation for the actions of organic nitrates and sodium nitroprusside that have long been used in the treatment of angina and hypertensive crises respectively, the discovery generated great hopes for new NO-based treatments for a wide variety of ailments. Decades later, however, we are still awaiting novel licensed agents in this arena, despite an enormous research effort to this end. This review explores some of the most promising recent advances in NO donor drug development and addresses the challenges associated with NO as a therapeutic agent.

Yuen Hon,  Carole Tremonti,  Edward O Cannon … (2007)
The recent discovery that nitrite is an intrinsic vasodilator and signaling molecule at near-physiological concentrations has raised the possibility that nitrite contributes to hypoxic vasodilation and to the bioactivity of nitroglycerin and mediates the cardiovascular protective effects of nitrate in the Mediterranean diet. However, important questions of potency, kinetics, mechanism of action, and possible induction of tolerance remain unanswered. In the present study, we performed biochemical, physiological, and pharmacological studies using nitrite infusion protocols in 20 normal human volunteers and in nonhuman primates to answer these questions, and we specifically tested 3 proposed mechanisms of bioactivation: reduction to nitric oxide by xanthine oxidoreductase, nonenzymatic disproportionation, and reduction by deoxyhemoglobin. We found that (1) nitrite is a relatively potent and fast vasodilator at near-physiological concentrations; (2) nitrite functions as an endocrine reservoir of nitric oxide, producing remote vasodilation during first-pass perfusion of the opposite limb; (3) nitrite is reduced to nitric oxide by intravascular reactions with hemoglobin and with intravascular reductants (ie, ascorbate); (4) inhibition of xanthine oxidoreductase with oxypurinol does not inhibit nitrite-dependent vasodilation but potentiates it; and (5) nitrite does not induce tolerance as observed with the organic nitrates. We propose that nitrite functions as a physiological regulator of vascular function and endocrine nitric oxide homeostasis and suggest that it is an active metabolite of the organic nitrates that can be used therapeutically to bypass enzymatic tolerance.