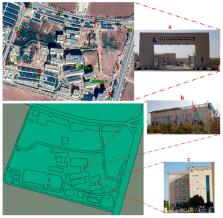 In the last two decades, due to the development of the information society, the massive increase in the use of information technologies, including the connection and communication of multiple electronic devices, highlighting Wi-Fi networks, as well as the emerging technological advances of 4G and 5G (new-generation mobile phones that will use 5G), have caused a significant increase in the personal exposure to Radiofrequency Electromagnetic Fields (RF-EMF), and as a consequence, increasing discussions about the possible adverse health effects. The main objective of this study was to measure the personal exposure to radiofrequency electromagnetic fields from the Wi-Fi in the university area of German Jordanian University (GJU) and prepare georeferenced maps of the registered intensity levels and to compare them with the basic international restrictions. Spot measurements were made outside the university area at German Jordanian University. Measurements were made in the whole university area and around two buildings. Two Satimo EME SPY 140 (Brest, France) personal exposimeters were used, and the measurements were performed in the morning and afternoon, and on weekends and weekdays. The total average personal exposure to RF-EMF from the Wi-Fi band registered in the three study areas and in the four days measured was 28.82 μW/m 2. The average total exposure from the Wi-Fi band registered in the ten measured points of the university area of GJU was 22.97 μW/m 2, the one registered in the eight measured points of building H was 34.48 μW/m 2, and the one registered in the eight points of building C was 29.00 μW/m 2. The maximum average values registered in the campus of GJU are below the guidelines allowed by International Commission on Non-ionizing Radiation Protection (ICNIRP). The measurement protocol used in this work has been applied in measurements already carried out in Spain and Mexico, and it is applicable in university areas of other countries.

Guidelines on limits of exposure to static magnetic fields.

Martin Röösli (2008)
This article is a systematic review of whether everyday exposure to radiofrequency electromagnetic field (RF-EMF) causes symptoms, and whether some individuals are able to detect low-level RF-EMF (below the ICNIRP [International Commission on Non-Ionizing Radiation Protection] guidelines). Peer-reviewed articles published before August 2007 were identified by means of a systematic literature search. Meta-analytic techniques were used to pool the results from studies investigating the ability to discriminate active from sham RF-EMF exposure. RF-EMF discrimination was investigated in seven studies including a total of 182 self-declared electromagnetic hypersensitive (EHS) individuals and 332 non-EHS individuals. The pooled correct field detection rate was 4.2% better than expected by chance (95% CI: -2.1 to 10.5). There was no evidence that EHS individuals could detect presence or absence of RF-EMF better than other persons. There was little evidence that short-term exposure to a mobile phone or base station causes symptoms based on the results of eight randomized trials investigating 194 EHS and 346 non-EHS individuals in a laboratory. Some of the trials provided evidence for the occurrence of nocebo effects. In population based studies an association between symptoms and exposure to RF-EMF in the everyday environment was repeatedly observed. This review showed that the large majority of individuals who claims to be able to detect low level RF-EMF are not able to do so under double-blind conditions. If such individuals exist, they represent a small minority and have not been identified yet. The available observational studies do not allow differentiating between biophysical from EMF and nocebo effects.

Systematic review on the health effects of exposure to radiofrequency electromagnetic fields from mobile phone base stations.

Martin Röösli,  Kerstin Hug,  Patrizia Frei … (2010)
to review and evaluate the recent literature on the health effects of exposure to mobile phone base station (MPBS) radiation. we performed a systematic review of randomized human trials conducted in laboratory settings and of epidemiological studies that investigated the health effects of MPBS radiation in the everyday environment. we included in the analysis 17 articles that met our basic quality criteria: 5 randomized human laboratory trials and 12 epidemiological studies. The majority of the papers (14) examined self-reported non-specific symptoms of ill-health. Most of the randomized trials did not detect any association between MPBS radiation and the development of acute symptoms during or shortly after exposure. The sporadically observed associations did not show a consistent pattern with regard to symptoms or types of exposure. We also found that the more sophisticated the exposure assessment, the less likely it was that an effect would be reported. Studies on health effects other than non-specific symptoms and studies on MPBS exposure in children were scarce. the evidence for a missing relationship between MPBS exposure up to 10 volts per metre and acute symptom development can be considered strong because it is based on randomized, blinded human laboratory trials. At present, there is insufficient data to draw firm conclusions about health effects from long-term low-level exposure typically occurring in the everyday environment.