Physiologic and pharmacokinetic changes in pregnancy 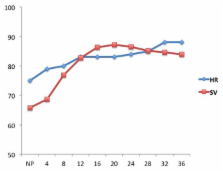 Physiologic changes in pregnancy induce profound alterations to the pharmacokinetic properties of many medications. These changes affect distribution, absorption, metabolism, and excretion of drugs, and thus may impact their pharmacodynamic properties during pregnancy. Pregnant women undergo several adaptations in many organ systems. Some adaptations are secondary to hormonal changes in pregnancy, while others occur to support the gravid woman and her developing fetus. Some of the changes in maternal physiology during pregnancy include, for example, increased maternal fat and total body water, decreased plasma protein concentrations, especially albumin, increased maternal blood volume, cardiac output, and blood flow to the kidneys and uteroplacental unit, and decreased blood pressure. The maternal blood volume expansion occurs at a larger proportion than the increase in red blood cell mass, which results in physiologic anemia and hemodilution. Other physiologic changes include increased tidal volume, partially compensated respiratory alkalosis, delayed gastric emptying and gastrointestinal motility, and altered activity of hepatic drug metabolizing enzymes. Understating these changes and their profound impact on the pharmacokinetic properties of drugs in pregnancy is essential to optimize maternal and fetal health.

Daniel Anderson (2004)
Observational studies have documented that women take a variety of medications during pregnancy. It is well known that pregnancy can induce changes in the plasma concentrations of some drugs. The use of mechanistic-based approaches to drug interactions has significantly increased our ability to predict clinically significant drug interactions and improve clinical care. This same method can also be used to improve our understanding regarding the effect of pregnancy on pharmacokinetics of drugs. Limited studies suggest bioavailability of drugs is not altered during pregnancy. Increased plasma volume and protein binding changes can alter the apparent volume of distribution (Vd) of drugs. Through changes in Vd and clearance, pregnancy can cause increases or decreases in the terminal elimination half-life of drugs. Depending on whether a drug is excreted unchanged by the kidneys or which metabolic isoenzyme is involved in the metabolism of a drug can determine whether or not a change in dosage is needed during pregnancy. The renal excretion of unchanged drugs is increased during pregnancy. The metabolism of drugs catalysed by select cytochrome P450 (CYP) isoenzymes (i.e. CYP3A4, CYP2D6 and CYP2C9) and uridine diphosphate glucuronosyltransferase (UGT) isoenzymes (i.e. UGT1A4 and UGT2B7) are increased during pregnancy. Dosages of drugs predominantly metabolised by these isoenzymes or excreted by the kidneys unchanged may need to be increased during pregnancy in order to avoid loss of efficacy. In contrast, CYP1A2 and CYP2C19 activity is decreased during pregnancy, suggesting that dosage reductions may be needed to minimise potential toxicity of their substrates. There are limitations to the available data. This analysis is based primarily on observational studies, many including small numbers of women. For some isoenzymes, the effect of pregnancy on only one drug has been evaluated. The full-time course of pharmacokinetic changes during pregnancy is often not studied. The effect of pregnancy on transport proteins is unknown. Drugs eliminated by non-CYP or non-UGT pathways or multiple pathways will need to be evaluated individually. In conclusion, by evaluating the pharmacokinetic data of a variety of drugs during pregnancy and using a mechanistic-based approach, we can start to predict the effect of pregnancy for a large number of clinically used drugs. However, because of the limitations, more clinical, evidence-based studies are needed to fully elucidate the effects of pregnancy on the pharmacokinetics of drugs.

Timing and magnitude of increases in levothyroxine requirements during pregnancy in women with hypothyroidism.

This article was submitted to Obstetric and Pediatric Pharmacology, a section of the journal Frontiers in Pharmacology.