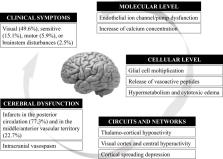 Migrainous infarction (MI) is a rare complication of migraines that accounts for 0.5–1.5% of all ischemic strokes. Although the pathogenesis of MI is still debated, cortical spreading depression and the consequent biochemical cascade and hemodynamic changes are presumed to play an important role. Here we describe a case of MI and systematically review the literature on the complex and possibly bidirectional relationship between migraine and stroke. A 44-year-old female with history of migraine with visual aura presented at the Emergency Department due to a sudden onset of left limb paresis and hypoesthesia. Brain magnetic resonance imaging revealed right fronto-parietal ischemic stroke. Two days after hospitalization, the patient experienced a prolonged visual aura and showed ultrasound evidence of intracranial artery vasospasm. To date, there have been 33 published articles on a total 119 patients with MI, although intracranial vasospasm has rarely been reported. Sustained hyperexcitability of cortical neurons, impairment of γ-aminobutyric acid inhibitory circuitry, altered serotonergic transmission, release of vasoconstrictive molecules, and cerebral blood flow changes have been proposed as pathogenic mechanisms of MI. The present case provides insight into the pathophysiological link between stroke and migraine, thus aiding clinicians in therapeutic decision-making although additional studies are needed to clarify the clinical, neuroradiological, and ultrasound findings that link MI and stroke-related migraine.

Is the cerebral cortex hyperexcitable or hyperresponsive in migraine?

F Pierelli,  J Schoenen,  G Coppola (2007)
Although migraineurs appear in general to be hypersensitive to external stimuli, they maybe also have increased daytime sleepiness and complain of fatigue. Neurophysiological studies between attacks have shown that for a number of different sensory modalities the migrainous brain is characterised by a lack of habituation of evoked responses. Whether this is due to increased cortical hyperexcitability, possibly due to decreased inhibition, or to an abnormal responsivity of the cortex due a decreased preactivation level remains disputed. Studies using transcranial magnetic stimulation in particular have yielded contradictory results. We will review here the available data on cortical excitability obtained with different methodological approaches in patients over the migraine cycle. We will show that these data congruently indicate that the sensory cortices of migraineurs react excessively to repetitive, but not to single, stimuli and that the controversy above hyper- versus hypo-excitability is merely a semantic misunderstanding. Describing the migrainous brain as 'hyperresponsive' would fit most of the available data. Deciphering the precise cellular and molecular underpinnings of this hyperresponsivity remains a challenge for future research. We propose, as a working hypothesis, that a thalamo-cortical dysrhythmia might be the culprit.

Philip E. S. Hamel (2007)
Migraine is the most frequent neurological disorder in the adult population worldwide, affecting up to 12% of the general population and more frequent in women ( approximately 25%). It has a high impact on our society due to its disabling nature and, therein, reduced quality of life and increased absenteeism from work. Headache is the primary clinical manifestation and it has been associated with 'a hereditary or predisposed sensitivity of neurovascular reactions to certain stimuli or to cyclic changes in the central nervous system' (1). Amongst the many neurotransmitters in the brain, the serotonergic (serotonin, 5-HT) system from the brainstem raphe nucleus has been most convincingly implicated in migraine pathophysiology. The documented changes in 5-HT metabolism and in the processing of central 5-HT-mediated responses during and in between migraine attacks have led to the suggestion that migraine is a consequence of a central neurochemical imbalance that involves a low serotonergic disposition. Although the exact cascade of events that link abnormal serotonergic neurotransmission to the manifestation of head pain and the accompanying symptoms has yet to be fully understood, recent evidence suggests that a low 5-HT state facilitates activation of the trigeminovascular nociceptive pathway, as induced by cortical spreading depression. In this short review, we present and discuss the original and most recent findings that support a role for altered serotonergic neurotransmission in the manifestation of migraine headache.

Infarcts in the posterior circulation territory in migraine. The population-based MRI CAMERA study.

Lenore Launer,  Odile van den Heuvel,  M Ferrari … (2005)
In a previous study, migraine cases from the general population were found to be at significantly increased risk of silent infarct-like lesions in the posterior circulation (PC) territory of the brain, notably in the cerebellum. In this study we describe the clinical and neuroimaging characteristics of migraine cases with and without aura and controls with PC lesions. In total, 39 PC infarct-like lesions represented the majority (65%) of all 60 identified brain infarct-like lesions in the study sample (n = 435 subjects with and without migraine). Most lesions (n = 33) were located in the cerebellum, often multiple, and were round or oval-shaped, with a mean size of 7 mm. The majority (88%) of infratentorial infarct-like lesions had a vascular border zone location in the cerebellum. Prevalence of these border zone lesions differed between controls (0.7%), cases with migraine without aura (2.2%) and cases with migraine with aura (7.5%). Besides higher age, cardiovascular risk factors were not more prevalent in cases with migraine with PC lesions. Presence of these lesions was not associated with supratentorial brain changes, such as white matter lesions. The combination of vascular distribution, deep border zone location, shape, size and imaging characteristics on MRI makes it likely that the lesions have an infarct origin. Previous investigators attributed cases of similar 'very small' cerebellar infarcts in non-migraine patients to a number of different infarct mechanisms. The relevance and likelihood of the aetiological options are placed in the context of known migraine pathophysiology. In addition, the specific involvement of the cerebellum in migraine is discussed. The results suggest that a combination of (possibly migraine attack-related) hypoperfusion and embolism is the likeliest mechanism for PC infarction in migraine, and not atherosclerosis or small-vessel disease.