Formation of black hole and emission of gravitational waves 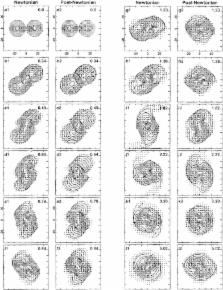 Numerical simulations were performed for the formation process of rotating black holes. It is suggested that Kerr black holes are formed for wide ranges of initial parameters. The nature of gravitational waves from a test particle falling into a Kerr black hole as well as the development of 3D numerical relativity for the coalescing binary neutron stars are discussed.

P Marronetti,  M. Campanelli,  C. O. Lousto … (2005)
We present a new algorithm for evolving orbiting black-hole binaries that does not require excision or a corotating shift. Our algorithm is based on a novel technique to handle the singular puncture conformal factor. This system, based on the BSSN formulation of Einstein's equations, when used with a `pre-collapsed' initial lapse, is non-singular at the start of the evolution, and remains non-singular and stable provided that a good choice is made for the gauge. As a test case, we use this technique to fully evolve orbiting black-hole binaries from near the Innermost Stable Circular Orbit (ISCO) regime. We show fourth order convergence of waveforms and compute the radiated gravitational energy and angular momentum from the plunge. These results are in good agreement with those predicted by the Lazarus approach.

Michael Koppitz,  James van Meter,  Joan Centrella … (2005)
We present new techniqes for evolving binary black hole systems which allow the accurate determination of gravitational waveforms directly from the wave zone region of the numerical simulations. Rather than excising the black hole interiors, our approach follows the "puncture" treatment of black holes, but utilzing a new gauge condition which allows the black holes to move successfully through the computational domain. We apply these techniques to an inspiraling binary, modeling the radiation generated during the final plunge and ringdown. We demonstrate convergence of the waveforms and good conservation of mass-energy, with just over 3% of the system's mass converted to gravitional radiation.

Recipient of the Japan Academy Prize in 2005.