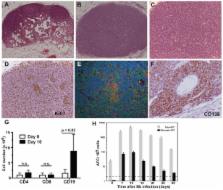 Lymphadenopathy is a hallmark of acute infection with Borrelia burgdorferi, a tick-borne spirochete and causative agent of Lyme borreliosis, but the underlying causes and the functional consequences of this lymph node enlargement have not been revealed. The present study demonstrates that extracellular, live spirochetes accumulate in the cortical areas of lymph nodes following infection of mice with either host-adapted, or tick-borne B. burgdorferi and that they, but not inactivated spirochetes, drive the lymphadenopathy. The ensuing lymph node response is characterized by strong, rapid extrafollicular B cell proliferation and differentiation to plasma cells, as assessed by immunohistochemistry, flow cytometry and ELISPOT analysis, while germinal center reactions were not consistently observed. The extrafollicular nature of this B cell response and its strongly IgM-skewed isotype profile bear the hallmarks of a T-independent response. The induced B cell response does appear, however, to be largely antigen-specific. Use of a cocktail of recombinant, in vivo-expressed B. burgdorferi-antigens revealed the robust induction of borrelia-specific antibody-secreting cells by ELISPOT. Furthermore, nearly a quarter of hybridomas generated from regional lymph nodes during acute infection showed reactivity against a small number of recombinant Borrelia-antigens. Finally, neither the quality nor the magnitude of the B cell responses was altered in mice lacking the Toll-like receptor adaptor molecule MyD88. Together, these findings suggest a novel evasion strategy for B. burgdorferi: subversion of the quality of a strongly induced, potentially protective borrelia-specific antibody response via B. burdorferi's accumulation in lymph nodes.

Acute Lyme Disease is one of the most important emerging diseases in the US. People with acute Lyme disease often develop swollen lymph nodes, or lymphadenopathy, but we do not know why this happens or what effect it has on the course of the disease. We show here that when mice are infected with live Borrelia burgdorferi spirochetes (the bacteria that cause Lyme disease), live spirochetes collect in the lymph nodes. These lymph nodes then swell up and start producing large numbers of antibody-producing cells. Although many of these antibodies can recognize the bacteria, they apparently lack the quality to clear the infection. We hypothesize that by moving into the lymph node, usually a site in which strong immune responses are induced, Borrelia evades the immune response: it goes to the lymph nodes and tricks the immune system into making a very strong but inadequate response.

Targeted disruption of the MyD88 gene results in loss of IL-1- and IL-18-mediated function.

Osamu Adachi,  Taro Kawai,  Kiyoshi Takeda … (1998)
MyD88, originally isolated as a myeloid differentiation primary response gene, is shown to act as an adaptor in interleukin-1 (IL-1) signaling by interacting with both the IL-1 receptor complex and IL-1 receptor-associated kinase (IRAK). Mice generated by gene targeting to lack MyD88 have defects in T cell proliferation as well as induction of acute phase proteins and cytokines in response to IL-1. Increases in interferon-gamma production and natural killer cell activity in response to IL-18 are abrogated. In vivo Th1 response is also impaired. Furthermore, IL-18-induced activation of NF-kappaB and c-Jun N-terminal kinase (JNK) is blocked in MyD88-/- Th1-developing cells. Taken together, these results demonstrate that MyD88 is a critical component in the signaling cascade that is mediated by IL-1 receptor as well as IL-18 receptor.

Publisher ID: PPATHOGENS-D-10-00234
DOI: 10.1371/journal.ppat.1002066
PMC ID: 3102705
PubMed ID: 21637808
Copyright statement: Tunev et al. This is an open-access article distributed under the terms of the Creative Commons Attribution License, which permits unrestricted use, distribution, and reproduction in any medium, provided the original author and source are credited.