The prevalence and prevention of nasopharyngeal carcinoma in China 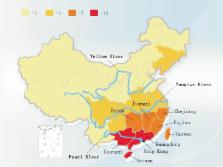 Nasopharyngeal carcinoma (NPC) has remarkable epidemiological features, including regional, racial, and familial aggregations. The aim of this review is to describe the epidemiological characteristics of NPC and to propose possible causes for the high incidence patterns in southern China. Since the etiology of NPC is not completely understood, approaches to primary prevention of NPC remain under consideration. This situation highlights the need to conduct secondary prevention, including improving rates of early detection, early diagnosis, and early treatment in NPC patients. Since the 1970's, high-risk populations in southern China have been screened extensively for early detection of NPC using anti–Epstein-Barr virus (EBV) serum biomarkers. This review summarizes several large screening studies that have been conducted in the high-incidence areas of China. Screening markers, high-risk age range for screening, time intervals for blood re-examination, and the effectiveness of these screening studies will be discussed. Conduction of prospective randomized controlled screening trials in southern China can be expected to maximize the cost-effectiveness of early NPC detection screening.

Susan Loong,  Chao-Nan Qian,  Joseph Tien-Seng Wee … (2010)
Nasopharyngeal cancer (NPC) is endemic in Southern China, with Guandong province and Hong Kong reporting some of the highest incidences in the world. The journal Science has called it a "Cantonese cancer". We propose that in fact NPC is a cancer that originated in the Bai Yue ("proto Tai Kadai" or "proto Austronesian" or "proto Zhuang") peoples and was transmitted to the Han Chinese in southern China through intermarriage. However, the work by John Ho raised the profile of NPC, and because of the high incidence of NPC in Hong Kong and Guangzhou, NPC became known as a Cantonese cancer. We searched historical articles, articles cited in PubMed, Google, monographs, books and Internet articles relating to genetics of the peoples with high populations of NPC. The migration history of these various peoples was extensively researched, and where possible, their genetic fingerprint identified to corroborate with historical accounts. Genetic and anthropological evidence suggest there are a lot of similarities between the Bai Yue and the aboriginal peoples of Borneo and Northeast India; between Inuit of Greenland, Austronesian Mayalo Polynesians of Southeast Asia and Polynesians of Oceania, suggesting some common ancestry. Genetic studies also suggest the present Cantonese, Minnans and Hakkas are probably an admixture of northern Han and southern Bai Yue. All these populations have a high incidence of NPC. Very early contact between southern Chinese and peoples of East Africa and Arabia can also account for the intermediate incidence of NPC in these regions.

Wei-Hua Jia,  Qi-Hong Huang,  Jian Liao … (2006)
Background Nasopharyngeal carcinoma (NPC) is a rare malignancy in most parts of the world but is common in southern China. A recent report from the Hong Kong Cancer Registry, a high-risk area for NPC in southern China, showed that incidence rate decreased by 29% for males and by 30% for females from 1980–1999, while mortality rate decreased by 43% for males and 50% for females. Changing environmental risk factors and improvements in diagnosis and treatment were speculated to be the major factors contributing to the downward trend of the incidence and mortality rates of NPC. To investigate the secular trends in different Cantonese populations with different socio-economic backgrounds and lifestyles, we report the incidences and mortality rates from two population-based cancer registries in Sihui and Cangwu counties from 1978–2002. Methods Incidence and mortality rates were aggregated by 5-year age groups and 5 calendar years. To adjust for the effect of difference in age composition for different periods, the total and age-specific rates of NPC incidence and mortality rate were adjusted by direct standardization according to the World Standard Population (1960). The Estimated Annual Percentage Change (EAPC) was used as an estimate of the trend. Results The incidence rate of NPC has remained stable during the recent two decades in Sihui and in females in Cangwu, with a slight increase observed in males in Cangwu from 17.81 to 19.76 per 100,000. The incidence rate in Sihui is 1.4–2.0 times higher during the corresponding years than in Cangwu, even though the residents of both areas are of Cantonese ethnicity. A progressive decline in mortality rate was observed in females only in Sihui, with an average reduction of 6.3% (p = 0.016) per five-year period. Conclusion To summarize, there is great potential to work in the area of NPC prevention and treatment in southern China to decrease NPC risk and improve survival risk rates in order to reduce M:I ratios. Future efforts on effective prevention, early detection and treatment strategies were also discussed in this paper. Furthermore, the data quality and completeness also need to be improved.

This is an open-access article distributed under the terms of the Creative Commons Attribution-NonCommercial-ShareAlike 3.0 Unported License, which allows readers to alter, transform, or build upon the article and then distribute the resulting work under the same or similar license to this one. The work must be attributed back to the original author and commercial use is not permitted without specific permission.