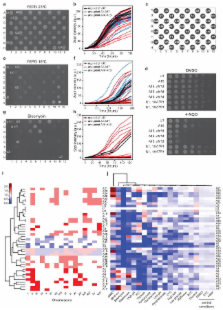 Aneuploidy, referring here to genome contents characterized by abnormal numbers of chromosomes, has been associated with developmental defects, cancer, and adaptive evolution in experimental organisms 1– 9. However, it remains unresolved how aneuploidy impacts gene expression and whether aneuploidy could directly bring phenotypic variation and improved fitness over that of euploid counterparts. In this work, we designed a novel scheme to generate, through random meiotic segregation, 38 stable and fully isogenic aneuploid yeast strains with distinct karyotypes and genome contents between 1N and 3N without involving any genetic selection. Through phenotypic profiling under various growth conditions or in the presence of a panel of chemotherapeutic or antifungal drugs, we found that aneuploid strains exhibited diverse growth phenotypes, and some aneuploid strains grew better than euploid control strains under conditions suboptimal for the latter. Using quantitative mass spectrometry-based proteomics, we show that the levels of protein expression largely scale with chromosome copy numbers, following the same trend observed for the transcriptome. These results provide strong evidence that aneuploidy directly impacts gene expression at both the transcriptome and proteome levels and can generate significant phenotypic variation that could bring about fitness gains under diverse conditions. Our findings suggest that the fitness ranking between euploid and aneuploid cells is context- and karyotype-dependent, providing the basis for the notion that aneuploidy can directly underlie phenotypic evolution and cellular adaptation.

Genomic expression programs in the response of yeast cells to environmental changes.

G Storz,  Michael Eisen,  John P. Brown … (2000)
We explored genomic expression patterns in the yeast Saccharomyces cerevisiae responding to diverse environmental transitions. DNA microarrays were used to measure changes in transcript levels over time for almost every yeast gene, as cells responded to temperature shocks, hydrogen peroxide, the superoxide-generating drug menadione, the sulfhydryl-oxidizing agent diamide, the disulfide-reducing agent dithiothreitol, hyper- and hypo-osmotic shock, amino acid starvation, nitrogen source depletion, and progression into stationary phase. A large set of genes (approximately 900) showed a similar drastic response to almost all of these environmental changes. Additional features of the genomic responses were specialized for specific conditions. Promoter analysis and subsequent characterization of the responses of mutant strains implicated the transcription factors Yap1p, as well as Msn2p and Msn4p, in mediating specific features of the transcriptional response, while the identification of novel sequence elements provided clues to novel regulators. Physiological themes in the genomic responses to specific environmental stresses provided insights into the effects of those stresses on the cell.

Michael Washburn,  Dirk Wolters,  John R R Yates (2001)
We describe a largely unbiased method for rapid and large-scale proteome analysis by multidimensional liquid chromatography, tandem mass spectrometry, and database searching by the SEQUEST algorithm, named multidimensional protein identification technology (MudPIT). MudPIT was applied to the proteome of the Saccharomyces cerevisiae strain BJ5460 grown to mid-log phase and yielded the largest proteome analysis to date. A total of 1,484 proteins were detected and identified. Categorization of these hits demonstrated the ability of this technology to detect and identify proteins rarely seen in proteome analysis, including low-abundance proteins like transcription factors and protein kinases. Furthermore, we identified 131 proteins with three or more predicted transmembrane domains, which allowed us to map the soluble domains of many of the integral membrane proteins. MudPIT is useful for proteome analysis and may be specifically applied to integral membrane proteins to obtain detailed biochemical information on this unwieldy class of proteins.

Effects of aneuploidy on cellular physiology and cell division in haploid yeast.

Tanya Sokolsky,  Francisco Torres-Espinola,  M L Boselli … (2007)
Aneuploidy is a condition frequently found in tumor cells, but its effect on cellular physiology is not known. We have characterized one aspect of aneuploidy: the gain of extra chromosomes. We created a collection of haploid yeast strains that each bear an extra copy of one or more of almost all of the yeast chromosomes. Their characterization revealed that aneuploid strains share a number of phenotypes, including defects in cell cycle progression, increased glucose uptake, and increased sensitivity to conditions interfering with protein synthesis and protein folding. These phenotypes were observed only in strains carrying additional yeast genes, which indicates that they reflect the consequences of additional protein production as well as the resulting imbalances in cellular protein composition. We conclude that aneuploidy causes not only a proliferative disadvantage but also a set of phenotypes that is independent of the identity of the individual extra chromosomes.