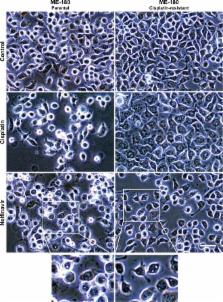 The standard treatment for cervical cancer in developed countries includes surgery and chemoradiation, with standard of care lagging in developing countries. Even in the former case, treatment frequently yields recalcitrant tumors and women succumb to disease. Here we examine the impact of nelfinavir, an off-patent viral protease inhibitor, which has shown promise as an antineoplastic agent.

We evaluated the morphological and proliferative effects of the autophagy-stressing drug nelfinavir in normal and cisplatin-resistant cervical cancer cells. Immunofluorescent validation of autophagy markers was performed and the impact of nelfinavir in an in vivo model of tumor growth was determined.

Nelfinavir exhibits cytotoxicity against both cisplatin-sensitive and -resistant ME-180 human cervical cancer cells in vitro and in vivo. Immunoblotting and immunofluorescence showed an expression of the autophagy marker LC3-II in response to nelfinavir treatment.

Nelfinavir, now available as an inexpensive generic orally dosed agent (Nelvir), is cytotoxic against cervical cancer cells. It acts by burdening the autophagy pathway to impair tumor cell survival and a modest induction of apoptosis. While further studies are needed to elucidate the optimal method of application of nelfinavir, it may represent an appealing global option for the treatment of cervical cancer.

Kathryn Winter,  David M Gershenson,  Patricia J. Eifel … (2004)
To report mature results of a randomized trial that compared extended-field radiotherapy (EFRT) versus pelvic radiotherapy with concomitant fluorouracil and cisplatin (CTRT) in women with locoregionally advanced carcinomas of the uterine cervix. Four hundred three women with cervical cancer were randomly assigned to receive either EFRT or CTRT. Patients were eligible if they had stage IIB to IVA disease, stage IB to IIA disease with a tumor diameter > or = 5 cm, or positive pelvic lymph nodes. Patients were stratified by stage and by method of lymph node evaluation. The median follow-up time for 228 surviving patients was 6.6 years. The overall survival rate for patients treated with CTRT was significantly greater than that for patients treated with EFRT (67% v 41% at 8 years; P <.0001). There was an overall reduction in the risk of disease recurrence of 51% (95% CI, 36% to 66%) for patients who received CTRT. Patients with stage IB to IIB disease who received CTRT had better overall and disease-free survival than those treated with EFRT (P <.0001); 116 patients with stage III to IVA disease had better disease-free survival (P =.05) and a trend toward better overall survival (P =.07) if they were randomly assigned to CTRT. The rate of serious late complications of treatment was similar for the two treatment arms. Mature analysis confirms that the addition of fluorouracil and cisplatin to radiotherapy significantly improved the survival rate of women with locally advanced cervical cancer without increasing the rate of late treatment-related side effects.

Natural history of dysplasia of the uterine cervix.

P Holowaty,  S S T To,  T. Rohan … (1999)
A historical cohort of Toronto (Ontario, Canada) women whose Pap smear histories were recorded at a major cytopathology laboratory provided the opportunity to study progression and regression of cervical dysplasia in an era (1962-1980) during which cervical squamous lesions were managed conservatively. Actuarial and Cox's survival analyses were used to estimate the rates and relative risks of progression and regression of mild (cervical intraepithelial neoplasia 1 [CIN1]) and moderate (CIN2) dysplasias. In addition, more than 17,000 women with a history of Pap smears between 1970 and 1980 inclusive and who were diagnosed as having mild, moderate, or severe dysplasia were linked to the Ontario Cancer Registry for the outcome of any subsequent cervical cancers occurring through 1989. Both mild and moderate dysplasias were more likely to regress than to progress. The risk of progression from mild to severe dysplasia or worse was only 1% per year, but the risk of progression from moderate dysplasia was 16% within 2 years and 25% within 5 years. Most of the excess risk of cervical cancer for severe and moderate dysplasias occurred within 2 years of the initial dysplastic smear. After 2 years, in comparison with mild dysplasia, the relative risks for progression from severe or moderate dysplasia to cervical cancer in situ or worse was 4.2 (95% confidence interval [CI] = 3.0-5.7) and 2.5 (95% CI = 2.2-3.0), respectively. The risk of progression for moderate dysplasia was intermediate between the risks for mild and severe dysplasia; thus, the moderate category may represent a clinically useful distinction. The majority of untreated mild dysplasias were recorded as regressing to yield a normal smear within 2 years.

Nelfinavir, A lead HIV protease inhibitor, is a broad-spectrum, anticancer agent that induces endoplasmic reticulum stress, autophagy, and apoptosis in vitro and in vivo.

Jennifer Borojerdi,  Jaclyn LoPiccolo,  Noel Warfel … (2007)
The development of new cancer drugs is slow and costly. HIV protease inhibitors are Food and Drug Administration approved for HIV patients. Because these drugs cause toxicities that can be associated with inhibition of Akt, an emerging target in cancer, we assessed the potential of HIV protease inhibitors as anticancer agents. HIV protease inhibitors were screened in vitro using assays that measure cellular proliferation, apoptotic and nonapoptotic cell death, endoplasmic reticulum (ER) stress, autophagy, and activation of Akt. Nelfinavir was tested in non-small cell lung carcinoma (NSCLC) xenografts with biomarker assessment. Three of six HIV protease inhibitors, nelfinavir, ritonavir, and saquinavir, inhibited proliferation of NSCLC cells, as well as every cell line in the NCI60 cell line panel. Nelfinavir was most potent with a mean 50% growth inhibition of 5.2 micromol/L, a concentration achievable in HIV patients. Nelfinavir caused two types of cell death, caspase-dependent apoptosis and caspase-independent death that was characterized by induction of ER stress and autophagy. Autophagy was protective because an inhibitor of autophagy increased nelfinavir-induced death. Akt was variably inhibited by HIV protease inhibitors, but nelfinavir caused the greatest inhibition of endogenous and growth factor-induced Akt activation. Nelfinavir decreased the viability of a panel of drug-resistant breast cancer cell lines and inhibited the growth of NSCLC xenografts that was associated with induction of ER stress, autophagy, and apoptosis. Nelfinavir is a lead HIV protease inhibitor with pleiotropic effects in cancer cells. Given its wide spectrum of activity, oral availability, and familiarity of administration, nelfinavir is a Food and Drug Administration-approved drug that could be repositioned as a cancer therapeutic.