Addiction and the adrenal cortex 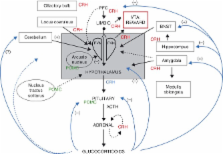 Substantial evidence shows that the hypophyseal–pituitary–adrenal (HPA) axis and corticosteroids are involved in the process of addiction to a variety of agents, and the adrenal cortex has a key role. In general, plasma concentrations of cortisol (or corticosterone in rats or mice) increase on drug withdrawal in a manner that suggests correlation with the behavioural and symptomatic sequelae both in man and in experimental animals. Corticosteroid levels fall back to normal values in resumption of drug intake. The possible interactions between brain corticotrophin releasing hormone (CRH) and proopiomelanocortin (POMC) products and the systemic HPA, and additionally with the local CRH–POMC system in the adrenal gland itself, are complex. Nevertheless, the evidence increasingly suggests that all may be interlinked and that CRH in the brain and brain POMC products interact with the blood-borne HPA directly or indirectly. Corticosteroids themselves are known to affect mood profoundly and may themselves be addictive. Additionally, there is a heightened susceptibility for addicted subjects to relapse in conditions that are associated with change in HPA activity, such as in stress, or at different times of the day. Recent studies give compelling evidence that a significant part of the array of addictive symptoms is directly attributable to the secretory activity of the adrenal cortex and the actions of corticosteroids. Additionally, sex differences in addiction may also be attributable to adrenocortical function: in humans, males may be protected through higher secretion of DHEA (and DHEAS), and in rats, females may be more susceptible because of higher corticosterone secretion.

O Kretz,  F Tronche,  G Schütz … (1999)
The glucocorticoid receptor (Gr, encoded by the gene Grl1) controls transcription of target genes both directly by interaction with DNA regulatory elements and indirectly by cross-talk with other transcription factors. In response to various stimuli, including stress, glucocorticoids coordinate metabolic, endocrine, immune and nervous system responses and ensure an adequate profile of transcription. In the brain, Gr has been proposed to modulate emotional behaviour, cognitive functions and addictive states. Previously, these aspects were not studied in the absence of functional Gr because inactivation of Grl1 in mice causes lethality at birth (F.T., C.K. and G.S., unpublished data). Therefore, we generated tissue-specific mutations of this gene using the Cre/loxP -recombination system. This allowed us to generate viable adult mice with loss of Gr function in selected tissues. Loss of Gr function in the nervous system impairs hypothalamus-pituitary-adrenal (HPA)-axis regulation, resulting in increased glucocorticoid (GC) levels that lead to symptoms reminiscent of those observed in Cushing syndrome. Conditional mutagenesis of Gr in the nervous system provides genetic evidence for the importance of Gr signalling in emotional behaviour because mutant animals show an impaired behavioural response to stress and display reduced anxiety.

Anatomy and regulation of the central melanocortin system.

R D Cone (2005)
The central melanocortin system is perhaps the best-characterized neuronal pathway involved in the regulation of energy homeostasis. This collection of circuits is unique in having the capability of sensing signals from a staggering array of hormones, nutrients and afferent neural inputs. It is likely to be involved in integrating long-term adipostatic signals from leptin and insulin, primarily received by the hypothalamus, with acute signals regulating hunger and satiety, primarily received by the brainstem. The system is also unique from a regulatory point of view in that it is composed of fibers expressing both agonists and antagonists of melanocortin receptors. Given that the central melanocortin system is an active target for development of drugs for the treatment of obesity, diabetes and cachexia, it is important to understand the system in its full complexity, including the likelihood that the system also regulates the cardiovascular and reproductive systems.

Estrogen actions in the brain and the basis for differential action in men and women: a case for sex-specific medicines.

Glenda Gillies,  Simon McArthur (2010)
The classic view of estrogen actions in the brain was confined to regulation of ovulation and reproductive behavior in the female of all mammalian species studied, including humans. Burgeoning evidence now documents profound effects of estrogens on learning, memory, and mood as well as neurodevelopmental and neurodegenerative processes. Most data derive from studies in females, but there is mounting recognition that estrogens play important roles in the male brain, where they can be generated from circulating testosterone by local aromatase enzymes or synthesized de novo by neurons and glia. Estrogen-based therapy therefore holds considerable promise for brain disorders that affect both men and women. However, as investigations are beginning to consider the role of estrogens in the male brain more carefully, it emerges that they have different, even opposite, effects as well as similar effects in male and female brains. This review focuses on these differences, including sex dimorphisms in the ability of estradiol to influence synaptic plasticity, neurotransmission, neurodegeneration, and cognition, which, we argue, are due in a large part to sex differences in the organization of the underlying circuitry. There are notable sex differences in the incidence and manifestations of virtually all central nervous system disorders, including neurodegenerative disease (Parkinson's and Alzheimer's), drug abuse, anxiety, and depression. Understanding the cellular and molecular basis of sex differences in brain physiology and responses to estrogen and estrogen mimics is, therefore, vitally important for understanding the nature and origins of sex-specific pathological conditions and for designing novel hormone-based therapeutic agents that will have optimal effectiveness in men or women.