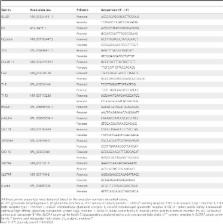 Identification of ZO-1: a high molecular weight polypeptide associated with the tight junction (zonula occludens) in a variety of epithelia

D. Goodenough,  R Stevenson,  J Siliciano (1986)
A tight junction-enriched membrane fraction has been used as immunogen to generate a monoclonal antiserum specific for this intercellular junction. Hybridomas were screened for their ability to both react on an immunoblot and localize to the junctional complex region on frozen sections of unfixed mouse liver. A stable hybridoma line has been isolated that secretes an antibody (R26.4C) that localizes in thin section images of isolated mouse liver plasma membranes to the points of membrane contact at the tight junction. This antibody recognizes a polypeptide of approximately 225,000 D, detectable in whole liver homogenates as well as in the tight junction-enriched membrane fraction. R26.4C localizes to the junctional complex region of a number of other epithelia, including colon, kidney, and testis, and to arterial endothelium, as assayed by immunofluorescent staining of cryostat sections of whole tissue. This antibody also stains the junctional complex region in confluent monolayers of the Madin-Darby canine kidney epithelial cell line. Immunoblot analysis of Madin-Darby canine kidney cells demonstrates the presence of a polypeptide similar in molecular weight to that detected in liver, suggesting that this protein is potentially a ubiquitous component of all mammalian tight junctions. The 225-kD tight junction-associated polypeptide is termed "ZO-1."

Stefan Bröer (2007)
The transport of amino acids in kidney and intestine is critical for the supply of amino acids to all tissues and the homeostasis of plasma amino acid levels. This is illustrated by a number of inherited disorders affecting amino acid transport in epithelial cells, such as cystinuria, lysinuric protein intolerance, Hartnup disorder, iminoglycinuria, dicarboxylic aminoaciduria, and some other less well-described disturbances of amino acid transport. The identification of most epithelial amino acid transporters over the past 15 years allows the definition of these disorders at the molecular level and provides a clear picture of the functional cooperation between transporters in the apical and basolateral membranes of mammalian epithelial cells. Transport of amino acids across the apical membrane not only makes use of sodium-dependent symporters, but also uses the proton-motive force and the gradient of other amino acids to efficiently absorb amino acids from the lumen. In the basolateral membrane, antiporters cooperate with facilitators to release amino acids without depleting cells of valuable nutrients. With very few exceptions, individual amino acids are transported by more than one transporter, providing backup capacity for absorption in the case of mutational inactivation of a transport system.

K Morita,  M Furuse,  S Tsukita … (1999)
Two related integral membrane proteins, claudin-1 and -2, recently were identified as novel components of tight junction (TJ) strands. Here, we report six more claudin-like proteins, indicating the existence of a claudin gene family. Three of these were reported previously as RVP1, Clostridium perfringens enterotoxin receptor, and TMVCF, but their physiological functions were not determined. Through similarity searches followed by PCR, we isolated full length cDNAs of mouse RVP1, Clostridium perfringens enterotoxin receptor, and TMVCF as well as three mouse claudin-like proteins and designated them as claudin-3 to -8, respectively. All of these claudin family members showed similar patterns on hydrophilicity plots, which predicted four transmembrane domains in each molecule. Northern blotting showed that the tissue distribution pattern varied significantly, depending on claudin species. Similarly to claudin-1 and -2, when these claudins were HA-tagged and introduced into cultured Madin-Darby canine kidney cells, all showed a tendency to concentrate at TJs. Immunofluorescence and immunoelectron microscopy with polyclonal antibodies specific for claudin-3, -4, or -8 revealed that these molecules were exclusively concentrated at TJs in the liver and/or kidney. These findings indicated that multiple claudin family members are involved in the formation of TJ strands in various tissues.

The present study was supported by National Key Basic Research Program of China (no. 2013CB127306). The funders had no role in study design, data collection and analysis, decision to publish, or preparation of the manuscript.