Review: The risk of contracting anthrax from spore-contaminated soil – A military medical perspective 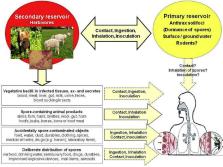 Anthrax is an infectious disease of relevance for military forces. Although spores of Bacillus anthracis obiquitously occur in soil, reports on soil-borne transmission to humans are scarce. In this narrative review, the potential of soil-borne transmission of anthrax to humans is discussed based on pathogen-specific characteristics and reports on anthrax in the course of several centuries of warfare. In theory, anthrax foci can pose a potential risk of infection to animals and humans if sufficient amounts of virulent spores are present in the soil even after an extended period of time. In praxis, however, transmissions are usually due to contacts with animal products and reported events of soil-based transmissions are scarce. In the history of warfare, even in the trenches of World War I, reported anthrax cases due to soil-contaminated wounds are virtually absent. Both the perspectives and the experience of the Western hemisphere and of former Soviet Republics are presented. Based on the accessible data as provided in the review, the transmission risk of anthrax by infections of wounds due to spore-contaminated soil is considered as very low under the most circumstance. Active historic anthrax foci may, however, still pose a risk to the health of deployed soldiers.

Ben T Copeland,  NICHOLAS S. DUESBERY,  N. Ahn … (1998)
Anthrax lethal toxin, produced by the bacterium Bacillus anthracis, is the major cause of death in animals infected with anthrax. One component of this toxin, lethal factor (LF), is suspected to be a metalloprotease, but no physiological substrates have been identified. Here it is shown that LF is a protease that cleaves the amino terminus of mitogen-activated protein kinase kinases 1 and 2 (MAPKK1 and MAPKK2) and that this cleavage inactivates MAPKK1 and inhibits the MAPK signal transduction pathway. The identification of a cleavage site for LF may facilitate the development of LF inhibitors.

S Leppla,  Stephen H Leppla (1982)
Anthrax toxin is composed of three proteins: protective antigen (PA), lethal factor (LF), and edema factor (EF). These proteins individually cause no known physiological effects in animals but in pairs produce two toxic actions. Injection of PA with LF causes death of rats in 60 min, whereas PA with EF causes edema in the skin of rabbits and guinea pigs. The mechanisms of action of these proteins have not been determined. It is shown here that EF is an adenylate cyclase [ATP pyrophosphate-lyase (cyclizing), EC 4.6.1.1] produced by Bacillus anthracis in an inactive form. Activation occurs upon contact with a heat-stable eukaryotic cell material. The specific activity of the resulting adenylate cyclase nearly equals that of the most active known cyclase. In Chinese hamster ovary cells exposed to PA and EF, cAMP concentrations increase without a lag to values about 200-fold above normal, remain high in the continued presence of toxin, and decrease rapidly after its removal. The increase in cAMP is completely blocked by excess LF. It is suggested that PA interacts with cells to form a receptor system by which EF and perhaps LF gain access to the cytoplasm.

Daniel B. Jernigan,  Pratima Raghunathan,  Beth P Bell … (2002)
In October 2001, the first inhalational anthrax case in the United States since 1976 was identified in a media company worker in Florida. A national investigation was initiated to identify additional cases and determine possible exposures to Bacillus anthracis. Surveillance was enhanced through health-care facilities, laboratories, and other means to identify cases, which were defined as clinically compatible illness with laboratory-confirmed B. anthracis infection. From October 4 to November 20, 2001, 22 cases of anthrax (11 inhalational, 11 cutaneous) were identified; 5 of the inhalational cases were fatal. Twenty (91%) case-patients were either mail handlers or were exposed to worksites where contaminated mail was processed or received. B. anthracis isolates from four powder-containing envelopes, 17 specimens from patients, and 106 environmental samples were indistinguishable by molecular subtyping. Illness and death occurred not only at targeted worksites, but also along the path of mail and in other settings. Continued vigilance for cases is needed among health-care providers and members of the public health and law enforcement communities.