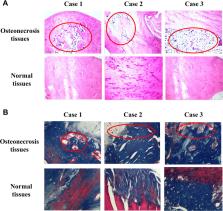 Osteonecrosis of the femoral head (ONFH) seriously affects the quality of life and labor ability of patients. It is urgent and vital to find the methods for necrosis clinical treatment.

This study aims to study the potential protective effects of Alendronate in the early stage of femur head necrosis.

Ten clinal ONFH tissue samples were employed. H&E staining was employed for the observation of the pathological characteristics of ONFH. The rat model (n=12) was established by the treatment of liquid nitrogen and then treated with Alendronate. The protein expression of BMP2, EIF2AK3, EIF2A and ATF4 were detected via Western blotting and IHC.

Fibrin and necrotizing granulation tissue were observed in ONFH tissues with lymphocytes and plasma cells infiltrating in the necrotic area, exhibiting the inflammatory muscle with abnormal shape and color. In the Model group, the BMP2 and ATF4 were mainly distributed in the cell boundaries. The relative protein expression of BMP2, EIF2AK3, EIF2A, ATF4 was decreased in the Model group, compared to the NC group, which was partially recovered by the Alendronate application.

Alendronate application partially reversed the suppression of expression of BMP2, EIF2AK3, EIF2A, ATF4 caused by liquid nitrogen. Alendronate could be a promising strategy of curing ONFH via targeting BMP2/EIF2AK3/EIF2A/ATF4 pathway.

Daniel J Julian,  G Saldanha,  Oleksandra Moseychuk … (2011)
Bone Morphogenetic Proteins (BMPs) are potent growth factors belonging to the Transforming Growth Factor Beta superfamily. To date over 20 members have been identified in humans with varying functions during processes such as embryogenesis, skeletal formation, hematopoiesis and neurogenesis. Though their functions have been identified, less is known regarding levels of regulation at the extracellular matrix, membrane surface, and receptor activation. Further, current models of activation lack the integration of these regulatory mechanisms. This review focuses on the different levels of regulation, ranging from the release of BMPs into the extracellular components to receptor activation for different BMPs. It also highlights areas in research that is lacking or contradictory. Copyright © 2010 Elsevier Inc. All rights reserved.

TMEM119 marks a subset of microglia in the human brain.

Jun-ichi Satoh,  Yoshihiro Kino,  Naohiro Asahina … (2016)
Microglia are resident myeloid cells of the central nervous system (CNS), activated in the brains of various neurological diseases. Microglia are ontogenetically and functionally distinct from monocyte-derived macrophages that infiltrate the CNS under pathological conditions. However, a lack of specific markers that distinguish resident microglia from circulating blood-derived macrophages in human brain tissues hampers accurate evaluation of microglial contributions to the human brain pathology. By comparative analysis of five comprehensive microglial transcriptome datasets, we identified an evolutionarily conserved protein TMEM119 as the most promising candidate for human microglial markers. TMEM119 was expressed on immortalized human microglia, in which the expression levels were not elevated by exposure to lipopolysaccharide, IFNγ, IL-4, IL-13 or TGFβ1. Notably, TMEM119 immunoreactivity was expressed exclusively on a subset of Iba1(+) CD68(+) microglia with ramified and amoeboid morphologies in the brains of neurodegenerative diseases, such as Alzheimer's disease (AD), whereas Iba1(+) CD68(+) infiltrating macrophages do not express TMEM119 in demyelinating lesions of multiple sclerosis and necrotic lesions of cerebral infarction. TMEM119 mRNA levels were elevated in AD brains, although the protein levels were not significantly different between AD and non-AD cases by western blot and morphometric analyses. TMEM119-positive microglia did not consistently express polarized markers for M1 (CD80) or M2 (CD163, CD209) in AD brains. These results suggest that TMEM119 serves as a reliable microglial marker that discriminates resident microglia from blood-derived macrophages in the human brain.

Does alendronate prevent collapse in osteonecrosis of the femoral head?