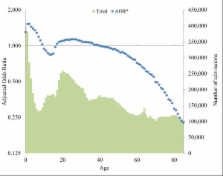 Using a national ED dataset, a cross-sectional examination of ED attendances in England from April 2011 to March 2012 (n = 15,056,095) was conducted. IA were defined as patients who were self-referred; were not attending a follow-up; received no investigation and either no treatment or ‘guidance/advice only’; and were discharged with either no follow-up or follow-up with primary care. Small, nationally representative areas were used to assign each attendance to a residential measure of deprivation. Multivariate analysis was used to predict relationships between IA, demographics (age, gender, deprivation) and temporal factors (day, month, hour, bank holiday, Christmas period).

Overall, 11.7% of attendances were categorized as inappropriate. IA peaked in early childhood (adjusted odds ratio (AOR) = 1.53 for both one and two year olds), and was elevated throughout late-teens and young adulthood, with odds reducing steadily from age 27 (reference category, age 40). Both IA and appropriate attendances (AA) were most frequent in the most deprived populations. However, relative to AA, those living in the least deprived areas had the highest odds of IA (AOR = 0.89 in most deprived quintile). Odds of IA were also higher for males (AOR = 0.95 in females). Both AA and IA were highest on Mondays, whilst weekends, bank holidays and the period between 8 am and 4 pm saw more IA relative to AA.

Prevention of IA would be best targeted at parents of young children and at older youths/young adults, and during weekends and bank holidays. Service provision focusing on access to primary care and EDs serving the most deprived communities would have the most benefit. Improvements in coverage and data quality of the national ED dataset, and the addition of an appropriateness field, would make this dataset an effective monitoring tool to evaluate interventions addressing this issue.

John C Moskop,  David Sklar,  Joel Geiderman … (2009)
Crowding is an increasingly common occurrence in hospital-based emergency departments (EDs) across the globe. This 2-article series offers an ethical and policy analysis of ED crowding. Part 1 begins with a discussion of terms used to describe this situation and proposes that the term "crowding" be preferred to "overcrowding." The article discusses definitions, measures, and causes of ED crowding and concludes that the inability to transfer emergency patients to inpatient beds and resultant boarding of admitted patients in the ED are among the root causes of ED crowding. Finally, the article identifies and describes a variety of adverse moral consequences of ED crowding, including increased risks of harm to patients, delays in providing needed care, compromised privacy and confidentiality, impaired communication, and diminished access to care. Part 2 of the series examines barriers to resolving the problem of ED crowding and strategies proposed to overcome those barriers.

Inappropriate use of emergency services: a systematic review of prevalence and associated factors.

Maria Carret,  A Fassa,  Marlos Domingues … (2008)
This systematic review aimed to measure the prevalence of inappropriate emergency department (ED) use by adults and associated factors. The review included 31 articles published in the last 12 years. Prevalence of inappropriate ED use varied from 20 to 40% and was associated with age and income. Female patients, those without co-morbidities, without a regular physician, without a regular source of care, and those not referred to the ED by a physician also showed more inappropriate ED use, with the relative risk varying from 1.12 to 2.42. Difficulties in accessing primary health care (difficulties in setting appointments, longer waiting periods, and short business hours at the primary health care service) were also associated with inappropriate ED use. Thus, primary care requires fully qualified patient reception and efficient triage to promptly attend cases that cannot wait. It is also necessary to orient the population on situations in which they should go to the ED and on the disadvantages of consulting the ED when the case is not really urgent.

Demand for emergency health service: factors associated with inappropriate use

Maria Carret,  Anaclaudia G. Fassa,  Ichiro Kawachi (2007)
Background The inappropriate use of emergency room (ER) service by patients with non-urgent health problems is a worldwide problem. Inappropriate ER use makes it difficult to guarantee access for real emergency cases, decreases readiness for care, produces negative spillover effects on the quality of emergency services, and raises overall costs. Methods We conducted a cross-sectional study in a medium-sized city in southern Brazil. The urgency of the presenting complaint was defined according to the Hospital Urgencies Appropriateness Protocol (HUAP). Multivariable Poisson regression was carried out to examine factors associated with inappropriate ER use. Results The study interviewed 1,647 patients over a consecutive 13-day sampling period. The prevalence of inappropriate ER use was 24.2% (95% CI 22.1–26.3). Inappropriate ER use was inversely associated with age (P = 0.001), longer stay in the waiting room, longer duration of symptoms and morning shift. However, the determinants of inappropriate ER use differed according age groups (P value for interaction = 0.04). Within the younger age-group (15–49 years), inappropriate ER use was higher among females, patients who reported visiting the ER because there was no other place to go, patients reporting that the doctor at the regular place of care refused to attend to them without a prior appointment, and individuals who reported that the PHC clinic which they use is open for shorter periods during the day. Among older patients (50+ years), those with highest level of education, absence of self-reported chronic diseases and lack of social support were more likely to engage in higher inappropriate ER use. Conclusion Efforts should be made to redirect inappropriate ER demand. Besides expanding access to, and improving the quality of primary and secondary care, it is important to mobilize social support for older patients, to enhance the relationship between different levels of care, as well as to develop campaigns to educate the public about the appropriate use of medical services.