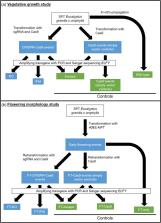 Eucalyptus is among the most widely planted taxa of forest trees worldwide. However, its spread as an exotic or genetically engineered form can create ecological and social problems. To mitigate gene flow via pollen and seeds, we mutated the Eucalyptus orthologue of LEAFY (LFY) by transforming a Eucalyptus grandis ×  urophylla wild‐type hybrid and two Flowering Locus T (FT) overexpressing (and flowering) lines with CRISPR Cas9 targeting its LFY orthologue, ELFY. We achieved high rates of elfy biallelic knockouts, often approaching 100% of transgene insertion events. Frameshift mutations and deletions removing conserved amino acids caused strong floral alterations, including indeterminacy in floral development and an absence of male and female gametes. These mutants were otherwise visibly normal and did not differ statistically from transgenic controls in juvenile vegetative growth rate or leaf morphology in greenhouse trials. Genes upstream or near to ELFY in the floral development pathway were overexpressed, whereas floral organ identity genes downstream of ELFY were severely depressed. We conclude that disruption of ELFY function appears to be a useful tool for sexual containment, without causing statistically significant or large adverse effects on juvenile vegetative growth or leaf morphology.

Koichiro Tamura, Glen Stecher, Daniel Walter Peterson … (2013)
We announce the release of an advanced version of the Molecular Evolutionary Genetics Analysis (MEGA) software, which currently contains facilities for building sequence alignments, inferring phylogenetic histories, and conducting molecular evolutionary analysis. In version 6.0, MEGA now enables the inference of timetrees, as it implements the RelTime method for estimating divergence times for all branching points in a phylogeny. A new Timetree Wizard in MEGA6 facilitates this timetree inference by providing a graphical user interface (GUI) to specify the phylogeny and calibration constraints step-by-step. This version also contains enhanced algorithms to search for the optimal trees under evolutionary criteria and implements a more advanced memory management that can double the size of sequence data sets to which MEGA can be applied. Both GUI and command-line versions of MEGA6 can be downloaded from www.megasoftware.net free of charge.

Martin Yanofsky, Hong Ma, John L. Bowman … (1990)
Mutations in the homeotic gene agamous of the plant Arabidopsis cause the transformation of the floral sex organs. Cloning and sequence analysis of agamous suggest that it encodes a protein with a high degree of sequence similarity to the DNA-binding region of transcription factors from yeast and humans and to the product of a homeotic gene from Antirrhinum. The agamous gene therefore probably encodes a transcription factor that regulates genes determining stamen and carpel development in wild-type flowers.

Henrik Böhlenius, Tao Huang, Laurence Charbonnel-Campaa … (2006)
Forest trees display a perennial growth behavior characterized by a multiple-year delay in flowering and, in temperate regions, an annual cycling between growth and dormancy. We show here that the CO/FT regulatory module, which controls flowering time in response to variations in daylength in annual plants, controls flowering in aspen trees. Unexpectedly, however, it also controls the short-day-induced growth cessation and bud set occurring in the fall. This regulatory mechanism can explain the ecogenetic variation in a highly adaptive trait: the critical daylength for growth cessation displayed by aspen trees sampled across a latitudinal gradient spanning northern Europe.