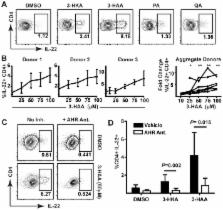 The aryl hydrocarbon receptor (AHR) binds to environmental toxicants including synthetic halogenated aromatic hydrocarbons and is involved in a diverse array of biological processes. Recently, the AHR was shown to control host immunity by affecting the balance between inflammatory T cells that produce IL-17 (Th17) and IL-22 versus regulatory T cells (Treg) involved in tolerance. While environmental AHR ligands can mediate this effect, endogenous ligands are likely to be more relevant in host immune responses. We investigated downstream metabolites of tryptophan as potential AHR ligands because (1) tryptophan metabolites have been implicated in regulating the balance between Th17 and Treg cells and (2) many of the AHR ligands identified thus far are derivatives of tryptophan. We characterized the ability of tryptophan metabolites to bind and activate the AHR and to increase IL-22 production in human T cells. We report that the tryptophan metabolite, cinnabarinic acid (CA), is an AHR ligand that stimulates the differentiation of human and mouse T cells producing IL-22. We compare the IL-22-stimulating activity of CA to that of other tryptophan metabolites and define stimulation conditions that lead to CA production from immune cells. Our findings link tryptophan metabolism to AHR activation and define a novel endogenous AHR agonist with potentially broad biological functions.

Peter Terness,  Thomas Bauer,  Lars Röse … (2002)
Indoleamine 2,3-dioxygenase (IDO), an enzyme involved in the catabolism of tryptophan, is expressed in certain cells and tissues, particularly in antigen-presenting cells of lymphoid organs and in the placenta. It was shown that IDO prevents rejection of the fetus during pregnancy, probably by inhibiting alloreactive T cells, and it was suggested that IDO-expression in antigen-presenting cells may control autoreactive immune responses. Degradation of tryptophan, an essential amino acid required for cell proliferation, was reported to be the mechanism of IDO-induced T cell suppression. Because we wanted to study the action of IDO-expressing dendritic cells (DCs) on allogeneic T cells, the human IDO gene was inserted into an adenoviral vector and expressed in DCs. Transgenic DCs decreased the concentration of tryptophan, increased the concentration of kynurenine, the main tryptophan metabolite, and suppressed allogeneic T cell proliferation in vitro. Kynurenine, 3-hydroxykynurenine, and 3-hydroxyanthranilic acid, but no other IDO-induced tryptophan metabolites, suppressed the T cell response, the suppressive effects being additive. T cells, once stopped in their proliferation, could not be restimulated. Inhibition of proliferation was likely due to T cell death because suppressive tryptophan catabolites exerted a cytotoxic action on CD3+ cells. This action preferentially affected activated T cells and increased gradually with exposure time. In addition to T cells, B and natural killer (NK) cells were also killed, whereas DCs were not affected. Our findings shed light on suppressive mechanisms mediated by DCs and provide an explanation for important biological processes in which IDO activity apparently is increased, such as protection of the fetus from rejection during pregnancy and possibly T cell death in HIV-infected patients.

Kynurenic acid is a potent endogenous aryl hydrocarbon receptor ligand that synergistically induces interleukin-6 in the presence of inflammatory signaling.

Colin Flaveny,  S. Lahoti,  Curtis Omiecinski … (2010)
Inflammatory signaling plays a key role in tumor progression, and the pleiotropic cytokine interleukin-6 (IL-6) is an important mediator of protumorigenic properties. Activation of the aryl hydrocarbon receptor (AHR) with exogenous ligands coupled with inflammatory signals can lead to synergistic induction of IL6 expression in tumor cells. Whether there are endogenous AHR ligands that can mediate IL6 production remains to be established. The indoleamine-2,3-dioxygenase pathway is a tryptophan oxidation pathway that is involved in controlling immune tolerance, which also aids in tumor escape. We screened the metabolites of this pathway for their ability to activate the AHR; results revealed that kynurenic acid (KA) is an efficient agonist for the human AHR. Structure-activity studies further indicate that the carboxylic acid group is required for significant agonist activity. KA is capable of inducing CYP1A1 messenger RNA levels in HepG2 cells and inducing CYP1A-mediated metabolism in primary human hepatocytes. In a human dioxin response element-driven stable reporter cell line, the EC(25) was observed to be 104nM, while in a mouse stable reporter cell line, the EC(25) was 10muM. AHR ligand competition binding assays revealed that KA is a ligand for the AHR. Treatment of MCF-7 cells with interleukin-1beta and a physiologically relevant concentration of KA (e.g., 100nM) leads to induction of IL6 expression that is largely dependent on AHR expression. Our findings have established that KA is a potent AHR endogenous ligand that can induce IL6 production and xenobiotic metabolism in cells at physiologically relevant concentrations.

Competing Interests: JEM has applied for a patent regarding Use of cinnabarinic acid as a modulator of immune responses in autoimmune disorders" (patent application number 13/579,893). This patent will not alter the authors' ability to share data and materials as required by PLOS ONE policies.

This work was supported in part by National Institutes of Health (NIH) grants OD000329 and R01AI40312 (to JMM), R01ES006272 (to MEH), P42ES007381 (Superfund Research Program at Boston University to JS, DHS and MEH), R21CA134882 (to JS), NIH Training Grant T32 GM007175 (MML), and the Harvey V. Berneking Living Trust. BK is supported by Career Development Awards from the NIH/National Institute of Diabetes and Digestive and Kidney Diseases (DK083334) and the NASPGHAN Foundation. JEM is a recipient of the Human Frontiers Science Program Long-Term Fellowship (LT000231/2011-L). JMM is a recipient of the NIH Director's Pioneer Award Program, part of the NIH Roadmap for Medical Research, through grant DPI OD00329. The funders had no role in study design, data collection and analysis, decision to publish, or preparation of the manuscript.