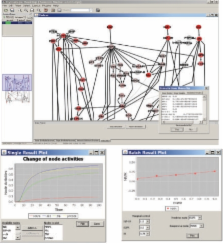 Summary: SimBoolNet is an open source Cytoscape plugin that simulates the dynamics of signaling transduction using Boolean networks. Given a user-specified level of stimulation to signal receptors, SimBoolNet simulates the response of downstream molecules and visualizes with animation and records the dynamic changes of the network. It can be used to generate hypotheses and facilitate experimental studies about causal relations and crosstalk among cellular signaling pathways.

Availability: SimBoolNet package (with manual) is freely available at http://www.ncbi.nlm.nih.gov/CBBresearch/Przytycka/SimBoolNet

Istvan Albert,  Juilee Thakar,  Song Li … (2008)
Modern life sciences research increasingly relies on computational solutions, from large scale data analyses to theoretical modeling. Within the theoretical models Boolean networks occupy an increasing role as they are eminently suited at mapping biological observations and hypotheses into a mathematical formalism. The conceptual underpinnings of Boolean modeling are very accessible even without a background in quantitative sciences, yet it allows life scientists to describe and explore a wide range of surprisingly complex phenomena. In this paper we provide a clear overview of the concepts used in Boolean simulations, present a software library that can perform these simulations based on simple text inputs and give three case studies. The large scale simulations in these case studies demonstrate the Boolean paradigms and their applicability as well as the advanced features and complex use cases that our software package allows. Our software is distributed via a liberal Open Source license and is freely accessible from

Computational methodologies for modelling, analysis and simulation of signalling networks.

Richard Orton,  Vladislav Vyshemirsky,  Hendrik Fuß … (2006)
This article is a critical review of computational techniques used to model, analyse and simulate signalling networks. We propose a conceptual framework, and discuss the role of signalling networks in three major areas: signal transduction, cellular rhythms and cell-to-cell communication. In order to avoid an overly abstract and general discussion, we focus on three case studies in the areas of receptor signalling and kinase cascades, cell-cycle regulation and wound healing. We report on a variety of modelling techniques and associated tools, in addition to the traditional approach based on ordinary differential equations (ODEs), which provide a range of descriptive and analytical powers. As the field matures, we expect a wider uptake of these alternative approaches for several reasons, including the need to take into account low protein copy numbers and noise and the great complexity of cellular organisation. An advantage offered by many of these alternative techniques, which have their origins in computing science, is the ability to perform sophisticated model analysis which can better relate predicted behaviour and observations.

This is an Open Access article distributed under the terms of the Creative Commons Attribution Non-Commercial License ( http://creativecommons.org/licenses/by-nc/2.5/uk/) which permits unrestricted non-commercial use, distribution, and reproduction in any medium, provided the original work is properly cited.