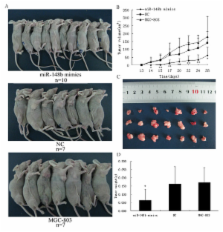 MicroRNAs (miRNAs) are involved in cancer development and progression, acting as tumor suppressors or oncogenes. Our previous studies have revealed that miR-148a and miR-152 are significantly down-regulated in gastrointestinal cancers. Interestingly, miR-148b has the same "seed sequences" as miR-148a and miR-152. Although aberrant expression of miR-148b has been observed in several types of cancer, its pathophysiologic role and relevance to tumorigenesis are still largely unknown. The purpose of this study was to elucidate the molecular mechanisms by which miR-148b acts as a tumor suppressor in gastric cancer.

We showed significant down-regulation of miR-148b in 106 gastric cancer tissues and four gastric cancer cell lines, compared with their non-tumor counterparts by real-time RT-PCR. In situ hybridization of ten cases confirmed an overt decrease in the level of miR-148b in gastric cancer tissues. Moreover, the expression of miR-148b was demonstrated to be associated with tumor size (P = 0.027) by a Mann-Whitney U test. We also found that miR-148b could inhibit cell proliferation in vitro by MTT assay, growth curves and an anchorage-independent growth assay in MGC-803, SGC-7901, BGC-823 and AGS cells. An experiment in nude mice revealed that miR-148b could suppress tumorigenicity in vivo. Using a luciferase activity assay and western blot, CCKBR was identified as a target of miR-148b in cells. Moreover, an obvious inverse correlation was observed between the expression of CCKBR protein and miR-148b in 49 pairs of tissues (P = 0.002, Spearman's correlation).

Jace W. Jones,  Lindsay B. Lewis,  David Bartel … (2003)
MicroRNAs (miRNAs) can play important gene regulatory roles in nematodes, insects, and plants by basepairing to mRNAs to specify posttranscriptional repression of these messages. However, the mRNAs regulated by vertebrate miRNAs are all unknown. Here we predict more than 400 regulatory target genes for the conserved vertebrate miRNAs by identifying mRNAs with conserved pairing to the 5' region of the miRNA and evaluating the number and quality of these complementary sites. Rigorous tests using shuffled miRNA controls supported a majority of these predictions, with the fraction of false positives estimated at 31% for targets identified in human, mouse, and rat and 22% for targets identified in pufferfish as well as mammals. Eleven predicted targets (out of 15 tested) were supported experimentally using a HeLa cell reporter system. The predicted regulatory targets of mammalian miRNAs were enriched for genes involved in transcriptional regulation but also encompassed an unexpectedly broad range of other functions.

Identifying biological themes within lists of genes with EASE.

Glynn Dennis,  Richard A. Lempicki,  Brad T. Sherman … (2002)
EASE is a customizable software application for rapid biological interpretation of gene lists that result from the analysis of microarray, proteomics, SAGE and other high-throughput genomic data. The biological themes returned by EASE recapitulate manually determined themes in previously published gene lists and are robust to varying methods of normalization, intensity calculation and statistical selection of genes. EASE is a powerful tool for rapidly converting the results of functional genomics studies from 'genes' to 'themes'.