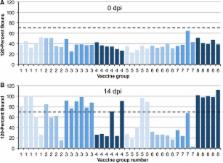 Peste des petits ruminants virus (PPRV) causes an economically important disease of sheep and goats, primarily in developing countries. It is becoming the object of intensive international control efforts. Current vaccines do not allow vaccinated and infected animals to be distinguished (no DIVA capability). We have previously shown that recombinant, replication-defective, adenovirus expressing the PPRV H glycoprotein (AdH) gives full protection against wild type PPRV challenge. We have now tested lower doses of the vaccine, as well as AdH in combination with a similar construct expressing the PPRV F glycoprotein (AdF). We show here that, in a local breed of goat in a country where PPR disease is common (Kenya), as little as 10 7 pfu of AdH gives significant protection against PPRV challenge, while a vaccine consisting of 10 8 pfu of each of AdH and AdF gives apparently sterile protection. These findings underline the utility of these constructs as DIVA vaccines for use in PPR control.

Carrie Batten,  Satya Parida,  Geneviève Libeau … (2010)
Viral diseases of farm animals, rather than being a diminishing problem across the world, are now appearing with regularity in areas where they have never been seen before. Across the developing world, viral pathogens such as peste des petits ruminants virus (PPRV) place a huge disease burden on agriculture, in particular affecting small ruminant production and in turn increasing poverty in some of the poorest parts of the world. PPRV is currently considered as one of the main animal transboundary diseases that constitutes a threat to livestock production in many developing countries, particularly in western Africa and south Asia. Infection of small ruminants with PPRV causes a devastating plague and as well as being endemic across much of the developing world, in recent years outbreaks of PPRV have occurred in the European part of Turkey. Indeed, the relevance of many once considered 'exotic' viruses is now also high across the European Union and may threaten further regions across the globe in the future. Here, we review the spread of PPRV across Africa, Asia and into Europe through submissions made to the OIE Regional Reference Laboratories. Further, we discuss current control methods and the development of further tools to aid both diagnosis of the disease and prevention.

Olivier Kwiatek,  Geneviève Libeau,  Emmanuel Albina … (2013)
Peste des Petits Ruminants (PPR) is a widespread viral disease caused by a Morbillivirus (Paramyxoviridae). There is a single serotype of PPR virus, but four distinct genetic lineages. Morbidity and mortality are high when occurring in naive sheep and goats populations. Cattle and African buffaloes (Syncerus caffer) are asymptomatically infected. Other wild ruminants and camels may express clinical signs and mortality. PPR has recently spread in southern and northern Africa, and in central and far-east Asia. More than one billion sheep and goats worldwide are at risk. PPR is also present in Europe through western Turkey. Because of its clinical incidence and the restrictions on animal movements, PPR is a disease of major economic importance. A live attenuated vaccine was developed in the 1980s, and has been widely used in sheep and goats. Current researches aim (i) to make it more thermotolerant for use in countries with limited cold chain, and (ii) to add a DIVA mark to shorten and reduce the cost of final eradication. Rinderpest virus-another Morbillivirus-was the first animal virus to be eradicated from Earth. PPRV has been proposed as the next candidate. Considering its wide distribution and its multiple target host species which have an intense mobility, it will be a long process that cannot exclusively rely on mass vaccination. PPR specific epidemiological features and socio-economic considerations will also have to be taken into account, and sustained international, coordinated, and funded strategy based on a regional approach of PPR control will be the guarantee toward success. Copyright © 2012 Elsevier B.V. All rights reserved.

Hubert Buczkowski,  M R Henstock,  C Oura … (2011)
Peste des petits ruminants virus (PPRV) causes a devastating disease of small ruminants present across much of Africa and Asia. Recent surveillance activities and phylogenetic analyses have suggested that the virus is an emerging problem as it is now being detected in areas previously free of the disease. As such, the virus not only is threatening small ruminant production and agricultural stability in the developing world, but also poses an economic threat to livestock in the European Union (EU) through introduction from European Turkey and North Africa. This report describes the development of a high throughput, rapid, real time RT-PCR method for the sensitive and specific detection of PPRV using robotic RNA extraction. This assay targets the nucleocapsid (N) gene of PPRV and has been shown to detect all four genetic lineages of PPRV in tissues, ocular and nasal swabs and blood samples collected in the field. The lowest detection limit achieved was approximately 10 genome copies/reaction, making this assay an ideal tool for the sensitive and rapid detection of PPRV in diagnostic laboratories. © 2010 Elsevier B.V. All rights reserved.