Parent-mediated intervention versus no intervention for infants at high risk of autism: a parallel, single-blind, randomised trial 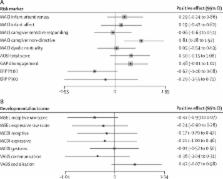 Risk markers for later autism identified in the first year of life present plausible intervention targets during early development. We aimed to assess the effect of a parent-mediated intervention for infants at high risk of autism on these markers.

We did a two-site, two-arm assessor-blinded randomised controlled trial of families with an infant at familial high risk of autism aged 7–10 months, testing the adapted Video Interaction to Promote Positive Parenting (iBASIS-VIPP) versus no intervention. Families were randomly assigned to intervention or no intervention groups using a permuted block approach stratified by centre. Assessors, but not families or therapists, were masked to group assignment. The primary outcome was infant attentiveness to parent. Regression analysis was done on an intention-to-treat basis. This trial is registered with ISCRTN Registry, number ISRCTN87373263.

With the exception of the response to vowel change, our study showed positive estimates across a wide range of behavioural and brain function risk-markers and developmental outcomes that are consistent with a moderate intervention effect to reduce the risk for later autism. However, the estimates have wide CIs that include possible nil or small negative effects. The results are encouraging for development and prevention science, but need larger-scale replication to improve precision.

Less is more: meta-analyses of sensitivity and attachment interventions in early childhood.

Beyond autism: a baby siblings research consortium study of high-risk children at three years of age.

John Constantino,  Daniel Messinger,  Marian Sigman … (2013)
First-degree relatives of persons with an autism spectrum disorder (ASD) are at increased risk for ASD-related characteristics. As little is known about the early expression of these characteristics, this study characterizes the non-ASD outcomes of 3-year-old high-risk (HR) siblings of children with ASD. Two groups of children without ASD participated: 507 HR siblings and 324 low-risk (LR) control subjects (no known relatives with ASD). Children were enrolled at a mean age of 8 months, and outcomes were assessed at 3 years. Outcome measures were Autism Diagnostic Observation Schedule (ADOS) calibrated severity scores, and Mullen Verbal and Non-Verbal Developmental Quotients (DQ). At 3 years, HR siblings without an ASD outcome exhibited higher mean ADOS severity scores and lower verbal and non-verbal DQs than LR controls. HR siblings were over-represented (21% HR versus 7% LR) in latent classes characterized by elevated ADOS severity and/or low to low-average DQs. The remaining HR siblings without ASD outcomes (79%) belonged to classes in which they were not differentially represented with respect to LR siblings. Having removed a previously identified 18.7% of HR siblings with ASD outcomes from all analyses, HR siblings nevertheless exhibited higher mean levels of ASD severity and lower levels of developmental functioning than LR children. However, the latent class membership of four-fifths of the HR siblings was not significantly different from that of LR control subjects. One-fifth of HR siblings belonged to classes characterized by higher ASD severity and/or lower levels of developmental functioning. This empirically derived characterization of an early-emerging pattern of difficulties in a minority of 3-year-old HR siblings suggests the importance of developmental surveillance and early intervention for these children. Copyright © 2013 American Academy of Child and Adolescent Psychiatry. Published by Elsevier Inc. All rights reserved.