HIV envelope: challenges and opportunities for development of entry inhibitors 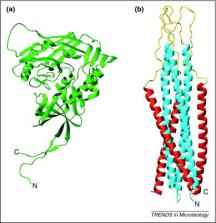 The HIV envelope proteins glycoprotein 120 (gp120) and glycoprotein 41 (gp41) play crucial roles in HIV entry, therefore they are of extreme interest in the development of novel therapeutics. Studies using diverse methods, including structural biology and mutagenesis, have resulted in a detailed model for envelope-mediated entry, which consists of multiple conformations, each a potential target for therapeutic intervention. In this review, the challenges, strategies and progress to date for developing novel entry inhibitors directed at disrupting HIV gp120 and gp41 function are discussed.

Core structure of gp41 from the HIV envelope glycoprotein.

David Chan,  Deborah Fass,  James M Berger … (1997)
The envelope glycoprotein of human immunodeficiency virus type 1 (HIV-1) consists of a complex of gp120 and gp41. gp120 determines viral tropism by binding to target-cell receptors, while gp41 mediates fusion between viral and cellular membranes. Previous studies identified an alpha-helical domain within gp41 composed of a trimer of two interacting peptides. The crystal structure of this complex, composed of the peptides N36 and C34, is a six-helical bundle. Three N36 helices form an interior, parallel coiled-coil trimer, while three C34 helices pack in an oblique, antiparallel manner into highly conserved, hydrophobic grooves on the surface of this trimer. This structure shows striking similarity to the low-pH-induced conformation of influenza hemagglutinin and likely represents the core of fusion-active gp41. Avenues for the design/discovery of small-molecule inhibitors of HIV infection are directly suggested by this structure.

Atomic structure of the ectodomain from HIV-1 gp41.

A Dessen,  J. Mark Skehel,  W Weissenhorn … (1997)
Fusion of viral and cellular membranes by the envelope glycoprotein gp120/gp41 effects entry of HIV-1 into the cell. The precursor, gp160, is cleaved post-translationally into gp120 and gp41 which remain non-covalently associated. Binding to both CD4 and a co-receptor leads to the conformational changes in gp120/gp41 needed for membrane fusion. We used X-ray crystallography to determine the structure of the protease-resistant part of a gp41 ectodomain solubilized with a trimeric GCN4 coiled coil in place of the amino-terminal fusion peptide. The core of the molecule is found to be an extended, triple-stranded alpha-helical coiled coil with the amino terminus at its tip. A carboxy-terminal alpha-helix packs in the reverse direction against the outside of the coiled coil, placing the amino and carboxy termini near each other at one end of the long rod. These features, and the existence of a similar reversal of chain direction in the fusion pH-induced conformation of influenza virus HA2 and in the transmembrane subunit of Moloney murine leukaemia virus (Fig. 1a-d), suggest a common mechanism for initiating fusion.

Sriram Subramaniam,  Guillermo Sapiro,  Alberto Bartesaghi … (2008)
The envelope glycoproteins (Env) of human and simian immunodeficiency viruses (HIV and SIV, respectively) mediate virus binding to the cell surface receptor CD4 on target cells to initiate infection. Env is a heterodimer of a transmembrane glycoprotein (gp41) and a surface glycoprotein (gp120), and forms trimers on the surface of the viral membrane. Using cryo-electron tomography combined with three-dimensional image classification and averaging, we report the three-dimensional structures of trimeric Env displayed on native HIV-1 in the unliganded state, in complex with the broadly neutralizing antibody b12 and in a ternary complex with CD4 and the 17b antibody. By fitting the known crystal structures of the monomeric gp120 core in the b12- and CD4/17b-bound conformations into the density maps derived by electron tomography, we derive molecular models for the native HIV-1 gp120 trimer in unliganded and CD4-bound states. We demonstrate that CD4 binding results in a major reorganization of the Env trimer, causing an outward rotation and displacement of each gp120 monomer. This appears to be coupled with a rearrangement of the gp41 region along the central axis of the trimer, leading to closer contact between the viral and target cell membranes. Our findings elucidate the structure and conformational changes of trimeric HIV-1 gp120 relevant to antibody neutralization and attachment to target cells.