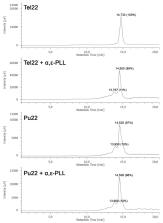 ε-poly- l-Lysine (ε-PLL) peptide is a product of the marine bacterium Bacillus subtilis with antibacterial and anticancer activity largely used worldwide as a food preservative. ε-PLL and its synthetic analogue α,ε-poly- l-lysine (α,ε-PLL) are also employed in the biomedical field as enhancers of anticancer drugs and for drug and gene delivery applications. Recently, several studies reported the interaction between these non-canonical peptides and DNA targets. Among the most important DNA targets are the DNA secondary structures known as G-quadruplexes (G4s) which play relevant roles in many biological processes and disease-related mechanisms. The search for novel ligands capable of interfering with G4-driven biological processes elicits growing attention in the screening of new classes of G4 binders. In this context, we have here investigated the potential of α,ε-PLL as a G4 ligand. In particular, the effects of the incubation of two different models of G4 DNA, i.e., the parallel G4 formed by the Pu22 (d[TGAGGGTGGGTAGGGTGGGTAA]) sequence, a mutated and shorter analogue of the G4-forming sequence known as Pu27 located in the promoter of the c-myc oncogene, and the hybrid parallel/antiparallel G4 formed by the human Tel22 (d[AGGGTTAGGGTTAGGGTTAGGG]) telomeric sequence, with α,ε-PLL are discussed in the light of circular dichroism (CD), UV, fluorescence, size exclusion chromatography (SEC), and surface plasmon resonance (SPR) evidence. Even though the SPR results indicated that α,ε-PLL is capable of binding with µM affinity to both the G4 models, spectroscopic and SEC investigations disclosed significant differences in the structural properties of the resulting α,ε-PLL/G4 complexes which support the use of α,ε-PLL as a G4 ligand capable of discriminating among different G4 topologies.

G-quadruplex DNA structures--variations on a theme.

T Simonsson (2001)
To be functional, nucleic acids need to adopt particular three-dimensional structures. For a long time DNA was regarded as a rigid and passive molecule with the sole purpose to store genetic information, but experimental data has now accumulated that indicates the full dynamic repertoire of this macromolecule. During the last decade, four-stranded DNA structures known as G-quadruplexes, or DNA tetraplexes, have emerged as a three-dimensional structure of special interest. Motifs for the formation of G-quadruplex DNA structures are widely dispersed in eukaryotic genomes, and are abundant in regions of biological significance, for example, at telomeres, in the promoters of many important genes, and at recombination hotspots, to name but a few in man. Here I explore the plethora of G-quadruplex DNA structures, and discuss their possible biological functions as well as the proteins that interact with them.

Anh Phan,  Yasha S Modi,  N. D. Patel (2004)
The nuclease-hypersensitivity element III1 in the c-myc promoter is a good anticancer target since it largely controls transcriptional activation of the important c-myc oncogene. Recently, the guanine-rich strand of this element has been shown to form an equilibrium between G-quadruplex structures built from two different sets of G-stretches; two models of intramolecular fold-back antiparallel-stranded G-quadruplexes, called "basket" and "chair" forms, were proposed. Here, we show by NMR that two sequences containing these two sets of G-stretches form intramolecular propeller-type parallel-stranded G-quadruplexes in K(+)-containing solution. The two structures involve a core of three stacked G-tetrads formed by four parallel G-stretches with all anti guanines and three double-chain-reversal loops bridging three G-tetrad layers. The central loop contains two or six residues, while the two other loops contain only one residue.