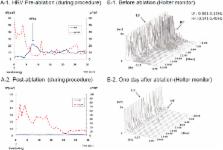 ScienceOpenPublisherPMC
Bookmark
There is no author summary for this article yet. Authors can add summaries to their articles on ScienceOpen to make them more accessible to a non-specialist audience.
KEY TEACHING POINTS Key Teaching Points • The autonomic nerve system, especially the parasympathetic nerve system, is strongly involved in the cause of swallowing-induced atrial tachyarrhythmia (SIAT). • Direct contact from the esophagus seems not to have an association with SIAT. • SIAT can be radically cured by catheter ablation. Introduction Swallowing-induced tachyarrhythmia is a rare clinical entity, and is defined as supraventricular tachyarrhythmia, such as atrial premature contractions (APCs), paroxysmal atrial tachycardia (AT), and paroxysmal atrial fibrillation, that is reproducibly and consistently induced during a wet or dry swallow. Although the first case of a swallowing-induced tachyarrhythmia was reported as far back as 1926 by Sakai et al, 1 no more than 50 cases have been described in the worldwide literature, as Tada et al 2 organized in a report. In this present report, we describe a case of swallowing-induced AT arising from the superior vena cava (SVC), which is assumed to have considerable association with parasympathetic nerve activity. Case report A 36-year-old man suffered from recurrent episodes of palpitation, which occurred several seconds after swallowing solid foods or drinking hot water. APCs and AT during swallowing were documented on electrocardiography and 24-hour Holter monitor. P wave morphology was positive in inferior leads and positive in V1 lead. Since beta-blockers and other antiarrhythmic drugs could not reduce episodes of this tachycardia, he was admitted to our hospital for an electrophysiological study and a catheter ablation. No structural heart disease was recognized in the echocardiogram. An esophagogram by swallowing contrast media revealed that the esophagus was located relatively leftward and was not adjacent to the right atrium. A decapolar catheter was placed into the SVC, and 2 decapolar circular catheters (Lasso; Biosense-Webster, Baldwin Park, CA) were placed into the left superior pulmonary vein and the right superior pulmonary vein. Figure 1 shows the location of these catheters and the intracardiac electrocardiogram of APCs after swallowing hot water. The earliest activation site of sinus rhythm was near SVC4, and this level was at the SVC–right atrium junction. The earliest activation site of APCs after swallowing was SVC1–2, which was above the SVC–right atrium junction. In this patient, heart rate variability (HRV) during the procedure was evaluated using a real-time HRV analyzing system (MemCalc; GMS Co, Ltd, Tokyo, Japan). This system can eliminate extrasystoles automatically and calculate HRV every 2 seconds. Low-frequency (LF) and high-frequency (HF) components of the patient’s heart rate were measured in order to evaluate changes in autonomic tone during the procedure. The HF component, which indicates parasympathetic nerve activity, increased immediately after swallowing, followed by APC induction. On the other hand, the LF/HF ratio, which indicates sympathetic nerve activity, decreased after swallowing (Figure 2A-1). APCs were mapped in the SVC using a 4-mm-tip ablation catheter. The earliest activation site of APCs was the posteroseptal aspect of the SVC and the local activation at the site preceded the onset of the P wave of APCs by 38 ms. APCs recorded from the unipolar lead of the ablation catheter showed a QS pattern at the site (Figure 3). Radiofrequency energy was applied at the site during sinus rhythm and the sinus interval was decreased from 760 to 700 ms. After ablation at this site, APCs or AT did not occur even after swallowing. After successful ablation, LF and HF components of the patient’s heart rate were measured again. The HF component was strongly suppressed and did not increase even after swallowing, while the LF/HF ratio was suppressed as before (Figure 2A-2). The HF component in 24-hour Holter monitoring was consistently suppressed significantly at 1 day after ablation compared to preablation 24-hour Holter monitor (Figure 2B-1 and B-2), which means a suppression of parasympathetic nerve activity continued even at 1 day after ablation. APCs did not occur for 15 months after this procedure. Discussion The true mechanism of swallowing-induced AT is still unclear. Direct mechanical interaction between the distended esophagus and the adjacent left atrium was previously suggested.3, 4 Burton et al 6 reported a case in which the patient needed intrapleural repositioning of the esophagus for curing swallowing arrhythmia. This suggested the direct mechanical stimulation from the esophagus to the left atrium. On the other hand, Lindsay 7 proposed a vagal nerve–mediated neural reflex as the initiating mechanism. In a case report by Morady et al, 5 an esophageal manometric study demonstrated that the swallowing tachycardia was coincident with relaxation of the upper esophageal sphincter and preceded the peristaltic activity in the esophageal body. They also described that the most possible mechanism was a vagally mediated neural reflex involving a neurotransmitter other than acetylcholine because atropine and bethanechol did not affect the swallowing-induced AT. Recently, many other reports suggested a neural reflex as the cause of swallowing-induced AT.8, 9, 10, 11 In this case report frequent atrial extrasystoles arising from the SVC were provoked by swallowing. The fact that the SVC was far away from the esophagus suggested that extrasystoles were provoked by neural reflex, not by direct contact from the esophagus. We also found a significant involvement of the autonomic nerve system in this AT from an HRV evaluation during the catheter ablation. The increase of parasympathetic nerve activity with suppression of sympathetic nerve activity were recognized when swallowing-induced AT occurred. The HF component was solely suppressed after ablation with suppression of APCs, suggesting that parasympathetic nerve activity was strongly involved in the cause of this arrhythmia rather than the sympathetic nerve system. Since AT was suppressed by ablation at a single site, not by SVC isolation, the success site might be the end of axons from ganglionated plexi (possibly the SVC–aorta ganglionated plexi), which contained mainly the parasympathetic nerve system, as previously reported.10, 11 Conclusion We experienced a case of swallowing-induced AT arising from the SVC that was cured by catheter ablation. HRV measurement revealed that this AT had a strong involvement of the parasympathetic nerve system as the cause of arrhythmia.

Supraventricular tachycardia induced by swallowing: a case report and review of the literature.

Gary W Cline,  F Morady,  B. Smieja-Król … (1986)
A 64-year-old man who complained of palpitations brought on by swallowing was found to have short runs of paroxysmal supraventricular tachycardia (SVT) induced by swallowing. Electrophysiology studies suggested that the SVT was an automatic atrial tachycardia. An esophageal manometric study demonstrated that the tachycardia was coincident with relaxation of the upper esophageal spincter and preceded peristaltic activity in the esophageal body. Atropine and bethanechol did not affect the swallow-induced tachycardia. The patient's symptoms were controlled by verapamil and quinidine. After five months, these medications were discontinued, with no recurrence of symptoms. Based on analysis of ten prior cases and the present case, it appears that swallow-induced SVT generally occurs in men between the ages of 45-75 years who have no evidence of structural heart disease or an esophageal disorder. The SVT is usually either a nonsustained automatic atrial tachycardia or atrial fibrillation. The mechanism is conjectural, but the most likely possibility is a vagally-mediated neural reflex, probably involving a neurotransmitter other than acetylcholine.

Yasuteru Yamauchi,  Kazutaka Aonuma,  Yukio Sekiguchi … (2005)
We present a case of a 49-year-old man who experienced invariably reproducible paroxysmal supraventricular tachycardia during swallowing. Because beta-blockers and multiple antiarrhythmic drugs failed to prevent the episodes of this tachycardia, we performed catheter mapping and ablation. After placing multiple decapolar catheters, when the patient swallowed a few sections of an orange, intracardiac mapping revealed atrial premature beats and atrial tachycardia that lasted for a few seconds and arose from an ostial site of the right superior pulmonary vein. After the right superior pulmonary vein antrum was completely isolated, the patient became free from the swallowing-induced tachycardia.