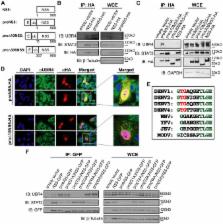 An estimated 50 million dengue virus (DENV) infections occur annually and more than forty percent of the human population is currently at risk of developing dengue fever (DF) or dengue hemorrhagic fever (DHF). Despite the prevalence and potential severity of DF and DHF, there are no approved vaccines or antiviral therapeutics available. An improved understanding of DENV immune evasion is pivotal for the rational development of anti-DENV therapeutics. Antagonism of type I interferon (IFN-I) signaling is a crucial mechanism of DENV immune evasion. DENV NS5 protein inhibits IFN-I signaling by mediating proteasome-dependent STAT2 degradation. Only proteolytically-processed NS5 can efficiently mediate STAT2 degradation, though both unprocessed and processed NS5 bind STAT2. Here we identify UBR4, a 600-kDa member of the N-recognin family, as an interacting partner of DENV NS5 that preferentially binds to processed NS5. Our results also demonstrate that DENV NS5 bridges STAT2 and UBR4. Furthermore, we show that UBR4 promotes DENV-mediated STAT2 degradation, and most importantly, that UBR4 is necessary for efficient viral replication in IFN-I competent cells. Our data underscore the importance of NS5-mediated STAT2 degradation in DENV replication and identify UBR4 as a host protein that is specifically exploited by DENV to inhibit IFN-I signaling via STAT2 degradation.

Dengue virus (DENV) is the leading cause of mosquito-borne viral illness and death in humans. At present, there are no vaccines and no specific antiviral therapeutics to prevent or treat DENV infections. We previously described that the NS5 protein of DENV inhibits type I interferon signaling in virus-infected cells by mediating STAT2 degradation. This property allows DENV to overcome the antiviral effects of type I interferon, contributing to viral replication in the host. We have now obtained new insight into the mechanism by which DENV NS5 induces STAT2 degradation. NS5 bridges STAT2 with the cellular protein UBR4, a member of a family of predicted E3 ligases, resulting in UBR4-mediated STAT2 degradation. Elimination of UBR4 or mutations in NS5 that prevent its binding to UBR4 prevent NS5 from inducing STAT2 degradation. Importantly, UBR4 is required for optimal DENV replication in the presence of a competent type I interferon system. Our data demonstrate the requirement of a host factor, UBR4, for DENV to overcome the antiviral interferon response. This information might be important for the design of specific DENV inhibitors that prevent dengue virus from evading innate immunity.

Bryan Williams,  William R. Silverman,  Xiao-Hua A Zhou … (1998)
The pleiotropic activities of interferons (IFNs) are mediated primarily through the transcriptional regulation of many downstream effector genes. The mRNA profiles from IFN-alpha, -beta, or -gamma treatments of the human fibrosarcoma cell line, HT1080, were determined by using oligonucleotide arrays with probe sets corresponding to more than 6,800 human genes. Among these were transcripts for known IFN-stimulated genes (ISGs), the expression of which were consistent with previous studies in which the particular ISG was characterized as responsive to either Type I (alpha, beta) or Type II (gamma) IFNs, or both. Importantly, many novel IFN-stimulated genes were identified that were diverse in their known biological functions. For instance, several novel ISGs were identified that are implicated in apoptosis (including RAP46/Bag-1, phospholipid scramblase, and hypoxia inducible factor-1alpha). Furthermore, several IFN-repressed genes also were identified. These results demonstrate the usefulness of oligonucleotide arrays in monitoring mammalian gene expression on a broad and unprecedented scale. In particular, these findings provide insights into the basic mechanisms of IFN actions and ultimately may contribute to better therapeutic uses for IFNs.

Localization of dengue virus in naturally infected human tissues, by immunohistochemistry and in situ hybridization.

Kala Jessie,  Shamala Sekaran,  Mun Yik Fong … (2004)
Dengue viral antigens have been demonstrated in several types of naturally infected human tissues, but little is known of whether these same tissues have detectable viral RNA. We studied tissue specimens from patients with serologically or virologically confirmed dengue infections by immunohistochemistry (IHC) and in situ hybridization (ISH), to localize viral antigen and RNA, respectively. IHC was performed on specimens obtained from 5 autopsies and 24 biopsies and on 20 blood-clot samples. For ISH, antisense riboprobes to the dengue E gene were applied to tissue specimens in which IHC was positive. Viral antigens were demonstrated in Kupffer and sinusoidal endothelial cells of the liver; macrophages, multinucleated cells, and reactive lymphoid cells in the spleen; macrophages and vascular endothelium in the lung; kidney tubules; and monocytes and lymphocytes in blood-clot samples. Positive-strand viral RNA was detected in the same IHC-positive cells found in the spleen and blood-clot samples. The strong, positive ISH signal in these cells indicated a high copy number of viral RNA, suggesting replication.

Barbara Selisko,  Bruno Canard,  Delphine Benarroch-Popivker … (2002)
Viruses represent an attractive system with which to study the molecular basis of mRNA capping and its relation to the RNA transcription machinery. The RNA-dependent RNA polymerase NS5 of flaviviruses presents a characteristic motif of S-adenosyl-L-methionine-dependent methyltransferases at its N-terminus, and polymerase motifs at its C-terminus. The crystal structure of an N-terminal fragment of Dengue virus type 2 NS5 is reported at 2.4 A resolution. We show that this NS5 domain includes a typical methyltransferase core and exhibits a (nucleoside-2'-O-)-methyltransferase activity on capped RNA. The structure of a ternary complex comprising S-adenosyl-L-homocysteine and a guanosine triphosphate (GTP) analogue shows that 54 amino acids N-terminal to the core provide a novel GTP-binding site that selects guanine using a previously unreported mechanism. Binding studies using GTP- and RNA cap-analogues, as well as the spatial arrangement of the methyltransferase active site relative to the GTP-binding site, suggest that the latter is a specific cap-binding site. As RNA capping is an essential viral function, these results provide a structural basis for the rational design of drugs against the emerging flaviviruses.