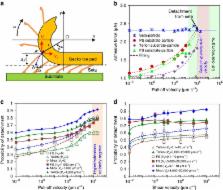 Geckos have the extraordinary ability to prevent their sticky feet from fouling while running on dusty walls and ceilings. Understanding gecko adhesion and self-cleaning mechanisms is essential for elucidating animal behaviours and rationally designing gecko-inspired devices. Here we report a unique self-cleaning mechanism possessed by the nano-pads of gecko spatulae. The difference between the velocity-dependent particle-wall adhesion and the velocity-independent spatula-particle dynamic response leads to a robust self-cleaning capability, allowing geckos to efficiently dislodge dirt during their locomotion. Emulating this natural design, we fabricate artificial spatulae and micromanipulators that show similar effects, and that provide a new way to manipulate micro-objects. By simply tuning the pull-off velocity, our gecko-inspired micromanipulators, made of synthetic microfibers with graphene-decorated micro-pads, can easily pick up, transport, and drop-off microparticles for precise assembling. This work should open the door to the development of novel self-cleaning adhesives, smart surfaces, microelectromechanical systems, biomedical devices, and more. 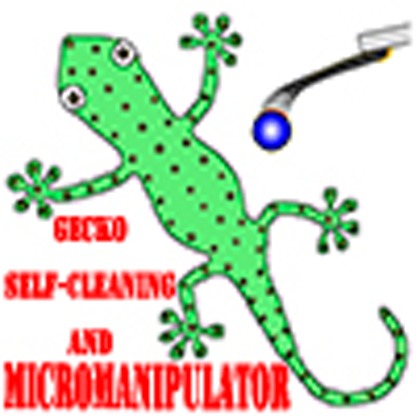 A running gecko can adhere to any surfaces at wet or dry conditions, whilst it keeps its toe pads clean. Here, Xu et al. attribute this self-cleaning mechanism to the rate-independent adhesion response between dirt particles and the gecko's foot and use synthetic microfibers to reproduce the effect.

Pete Vukusic,  J. Sambles (2003)
Millions of years before we began to manipulate the flow of light using synthetic structures, biological systems were using nanometre-scale architectures to produce striking optical effects. An astonishing variety of natural photonic structures exists: a species of Brittlestar uses photonic elements composed of calcite to collect light, Morpho butterflies use multiple layers of cuticle and air to produce their striking blue colour and some insects use arrays of elements, known as nipple arrays, to reduce reflectivity in their compound eyes. Natural photonic structures are providing inspiration for technological applications.

A. N. Zhukov,  A. K. Geim,  S Yu Shapoval … (2003)
The amazing climbing ability of geckos has attracted the interest of philosophers and scientists alike for centuries. However, only in the past few years has progress been made in understanding the mechanism behind this ability, which relies on submicrometre keratin hairs covering the soles of geckos. Each hair produces a miniscule force approximately 10(-7) N (due to van der Waals and/or capillary interactions) but millions of hairs acting together create a formidable adhesion of approximately 10 N x cm(-2): sufficient to keep geckos firmly on their feet, even when upside down on a glass ceiling. It is very tempting to create a new type of adhesive by mimicking the gecko mechanism. Here we report on a prototype of such 'gecko tape' made by microfabrication of dense arrays of flexible plastic pillars, the geometry of which is optimized to ensure their collective adhesion. Our approach shows a way to manufacture self-cleaning, re-attachable dry adhesives, although problems related to their durability and mass production are yet to be resolved.

M Spenko,  A Dittmore,  M Cutkosky … (2006)
Directional arrays of branched microscopic setae constitute a dry adhesive on the toes of pad-bearing geckos, nature's supreme climbers. Geckos are easily and rapidly able to detach their toes as they climb. There are two known mechanisms of detachment: (1) on the microscale, the seta detaches when the shaft reaches a critical angle with the substrate, and (2) on the macroscale, geckos hyperextend their toes, apparently peeling like tape. This raises the question of how geckos prevent detachment while inverted on the ceiling, where body weight should cause toes to peel and setal angles to increase. Geckos use opposing feet and toes while inverted, possibly to maintain shear forces that prevent detachment of setae or peeling of toes. If detachment occurs by macroscale peeling of toes, the peel angle should monotonically decrease with applied force. In contrast, if adhesive force is limited by microscale detachment of setae at a critical angle, the toe detachment angle should be independent of applied force. We tested the hypothesis that adhesion is increased by shear force in isolated setal arrays and live gecko toes. We also tested the corollary hypotheses that (1) adhesion in toes and arrays is limited as on the microscale by a critical angle, or (2) on the macroscale by adhesive strength as predicted for adhesive tapes. We found that adhesion depended directly on shear force, and was independent of detachment angle. Therefore we reject the hypothesis that gecko toes peel like tape. The linear relation between adhesion and shear force is consistent with a critical angle of release in live gecko toes and isolated setal arrays, and also with our prior observations of single setae. We introduced a new model, frictional adhesion, for gecko pad attachment and compared it to existing models of adhesive contacts. In an analysis of clinging stability of a gecko on an inclined plane each adhesive model predicted a different force control strategy. The frictional adhesion model provides an explanation for the very low detachment forces observed in climbing geckos that does not depend on toe peeling.