Analysis of cytomegalovirus-specific T-cell responses in patients with hypertension: comparison of assay methods and antigens 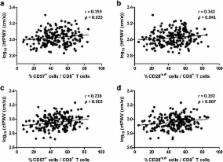 Recent studies suggest an association between cytomegalovirus (CMV) infection and hypertension. In the present study, we used a variety of antigens and different assay methods to investigate the relationship between CMV-specific T-cell responses and arterial stiffness in patients with hypertension.

CMV pp65-specific CD8 + T-cell responses were independently correlated with arterial stiffness in patients with hypertension. Additionally, the results of ICS and ELISPOT assays showed a significant correlation and good agreement with each other. These findings are important for guiding choices regarding the broad clinical application of CMV-specific T-cell response assays in this patient population.

Janko Nikolich-Zugich (2008)
Key Points A decline in T-cell immunity is one of the most consistent and most profound deficiencies of the elderly. Therapeutic correction of this decline often restores immune responsiveness and immune defence. T-cell immune decline in the elderly has at least two underpinnings: a drop in the responsiveness of naive T cells to stimulation (cell-autonomous defects) and a reduction in naive T-cell numbers and diversity that leads to a dominant memory T-cell pool (T-cell population imbalance). This article discusses two key causes of age-related T-cell population imbalance: homeostatic cycling or proliferative expansion in the peripheral T-cell pool, and latent persistent infections, which repeatedly stimulate the T-cell pool over the lifetime of the individual. The reduction in production of naive T cells by the thymus forces the ageing organism to rely on compensatory homeostatic mechanisms to maintain the balance between naive and memory T-cell pools. Although this may be initially successful, recent evidence suggests that late in life these mechanisms exhaust their usefulness and actually contribute to a further demise of the remaining naive T cells. Latent persistent infections, particularly with herpesviruses, lead to life-long periodic restimulation of the immune system, here, evidence is presented for the role of viral reactivation in this restimulation using a mouse model of herpesvirus infection and ageing. Relative roles and the interplay between the homeostatic and viral factors are discussed, with the former having a surprisingly prominent role. Finally, modes of immune rejuvenation and anti-ageing intervention are debated in light of these advances in our knowledge.

T. Fülöp,  A. Larbi,  G. Pawelec (2013)
Aging is associated with a dysregulation of the immune response, loosely termed “immunosenescence.” Each part of the immune system is influenced to some extent by the aging process. However, adaptive immunity seems more extensively affected and among all participating cells it is the T cells that are most altered. There is a large body of experimental work devoted to the investigation of age-associated differences in T cell phenotypes and functions in young and old individuals, but few longitudinal studies in humans actually delineating changes at the level of the individual. In most studies, the number and proportion of late-differentiated T cells, especially CD8+ T cells, is reported to be higher in the elderly than in the young. Limited longitudinal studies suggest that accumulation of these cells is a dynamic process and does indeed represent an age-associated change. Accumulations of such late-stage cells may contribute to the enhanced systemic pro-inflammatory milieu commonly seen in older people. We do not know exactly what causes these observed changes, but an understanding of the possible causes is now beginning to emerge. A favored hypothesis is that these events are at least partly due to the effects of the maintenance of essential immune surveillance against persistent viral infections, notably Cytomegalovirus (CMV), which may exhaust the immune system over time. It is still a matter of debate as to whether these changes are compensatory and beneficial or pathological and detrimental to the proper functioning of the immune system and whether they impact longevity. Here, we will review present knowledge of T cell changes with aging and their relation to chronic viral and possibly other persistent infections.

Anis Larbi,  Graham Pawelec,  Evelyna Derhovanessian … (2008)
'Immunosenescence' is an imprecise term used to describe deleterious age-associated changes to immune parameters observed in all mammals studied so far. Primarily anecdotal evidence implies that failing immunity is responsible for the increased incidence and severity of infectious disease in old people. However, there is a serious dearth of accurate hard data concerning the actual cause of death in the elderly and the contribution thereto of the multitude of age-associated alterations measured in the immune system. Cross-sectional studies comparing those currently young with those currently old reveal a large number of differences in the distribution of immune cell types in the blood, and to some extent the functional integrity of those cells. Many of these parameters differ markedly between individuals infected with CMV and uninfected people, regardless of infection with other persistent herpesviruses. The adaptive arm of immunity appears to be more seriously affected than the innate arm, particularly the T lymphocytes. However, cross-sectional studies suffer the disadvantage that like is not being compared with like, because the conditions applied during the entire life course of the currently elderly were different from those applied now to the young. These differences in environment, nutrition, pathology and possibly genetics, rather than merely age, may be expected to influence the parameters studied. Moreover, pathogen exposure of the currently elderly was also different from contemporary exposure, probably including CMV. Some of the problems associated with cross-sectional studies can be overcome by performing longitudinal studies, as pointed out in an earlier analysis of the Baltimore Longitudinal Ageing study looking at lymphocyte numbers. However, longitudinal studies are challenging in humans. Nonetheless, the pioneering Swedish OCTO/NONA studies of the very elderly which for the first time included a range of immune parameters, have identified a set of immune parameters predicting mortality at 2, 4 and 6 year follow-up; CMV infection makes a material contribution to this so-called 'immune risk profile (IRP)'. Whether the IRP is informative in younger individuals and the mechanism of the CMV effect is discussed in this review.