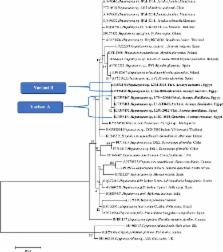 Long-term field studies of parasite communities are rare but provide a powerful insight into the ecological processes shaping host-parasite interactions. The aim of our study was to monitor long-term trends in the haemoparasite communities of spiny mice ( Acomys dimidiatus) and to identify the principal factors responsible for changes over a 12 year period.

Overall 76.2 % of spiny mice carried at least one of the five haemoparasite genera ( Babesia, Bartonella, Haemobartonella, Hepatozoon, Trypanosoma) recorded in the study. Prevalence of haemoparasites varied significantly between the sites with the highest overall prevalence in Wadi Tlah and the lowest in W. El Arbaein, and this changed significantly with time. In the first two surveys there was little change in prevalence, but by 2008, when the first signs of a deepening drought in the region had become apparent, prevalence began to drift downwards, and by 2012 prevalence had fallen to the lowest values recorded from all four sites over the entire 12-year period. The overall mean species richness was 1.2 ± 0.03, which peaked in 2004 and then dropped by more than 50 % by 2012. Species richness was highest among mice from Wadi Tlah and peaked in age class 2 mice (young adults). Site was the most significant factor affecting the prevalence of individual parasite species, with Trypanosoma acomys and Hepatozoon sp. occurring mainly in two wadis (W. Tlah & W. Gharaba). In four of the five genera recorded in the study we observed a significant drop in prevalence or/and abundance since 2004, the exception being Hepatozoon sp .

During the 12-year-long period of study in the Sinai, we observed dynamic changes and possibly even cycles of prevalence and abundance of infections which differed depending on parasite species. Although the exact reasons cannot be identified at this time, we hypothesize that the effects of a 15-year-long scarcity of rainfall in the local environment and a fall in host densities over the period of study may have been responsible for a drop in transmission rates, possibly by a negative impact on vector survival.

J. G. Smith (1996)
Hemogregarines of the genus Hepatozoon are intraerythrocytic apicomplexan parasites that have been described from all groups of tetrapod vertebrates. Gametogenesis, fertilization, and sporogonic development, which culminates in the formation of polysporocystic oocysts, occur in the gut or hemocoel of a hematophagous arthropod definitive host. Merogonic development occurs in the internal organs of vertebrate hosts after they ingest these infected arthropods. The presence of cystic stages, observed for many Hepatozoon species, increases life cycle complexity and exploits the feeding behavior of vertebrate hosts. The inconsistency of morphological characteristics of these parasites, especially those associated with gamont structure, coupled with low host specificity of the parasites for their invertebrate and vertebrate hosts, have rendered species differentiation difficult. A systematic review of the hemogregarine complex has resulted in the expansion of the genus Hepatozoon to include all members of the genus Haemogregarina that infect amphibians, snakes, lizards, crocodilians, birds, and mammals.

Analysis of the 18S rRNA gene sequence of a Hepatozoon detected in two Japanese dogs.

Hisashi Inokuma, Masaru Okuda, Koichi Ohno … (2002)
Partial sequences of the 18S rRNA gene (625 bp) from a Hepatozoon detected in two canine hepatozoonosis cases, one clinical and one subclinical, in Japan were analyzed. Both sequences were identical to each other and they were closely related to the Hepatozoon canis strain found in Israel with 99% (617/625) nucleotide identity. Both Hepatozoon americanum and Hepatozoon catasbianae were distantly related to the Japanese Hepatozoon with 94% (586/625) and 91% (566/625) identities, respectively. In a phylogenetic tree, the Japanese Hepatozoon was most closely related to H. canis from Israel but was significantly different than H. americanum and H. catasbianae. These results suggest that the Hepatozoon detected in the Japanese dogs might be a strain variant of H. canis, but is apparently a different species than H. americanum.

A nested PCR for the ssrRNA gene detects Trypanosoma binneyi in the platypus and Trypanosoma sp. in wombats and kangaroos in Australia.

H.a Noyes, J.R. Stevens, M. Teixeira … (1999)
Trypanosome infections in their natural hosts are frequently difficult to detect by microscopy, and culture methods are unreliable and not suitable for all species of Trypanosoma. A nested PCR strategy for detecting and identifying Trypanosoma species, suitable for detecting both known and unknown trypanosomes, is presented. Thirty-two blood samples from 23 species of Australian birds and mammals were screened by a nested PCR for the presence of Trypanosoma sp. ssrRNA. Three infections were detected, one in an eastern grey kangaroo (Macropus giganteus), one in a common wombat (Vombatus ursinus) and one in a platypus (Ornithorhynchus anatinus). The kangaroo and wombat are new host records for Trypanosoma sp.; the platypus parasite was Trypanosoma hinneyi. The three parasites could be distinguished by restriction fragment length polymorphisms of the amplified fragment of the ssrRNA gene. The kangaroo and wombat parasites were also isolated in a semi-solid blood agar medium. The culture forms of the kangaroo trypanosome had an expanded flagellar sheath in which structures similar to hemidesmosomes were detected by EM. The nested PCR was at least as sensitive as culture, and analysis of the PCR products gave parasite-specific fingerprints. Therefore this method could be suitable for rapidly screening host animals for the presence of trypanosomes and identifying the infecting strain.