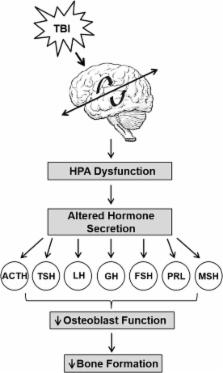 Traumatic brain injury (TBI) leads to long-term cognitive, behavioral, affective deficits, and increase neurodegenerative diseases. It is only in recent years that there is growing awareness that TBI even in its milder form poses long-term health consequences to not only the brain but to other organ systems. Also, the concept that hormonal signals and neural circuits that originate in the hypothalamus play key roles in regulating skeletal system is gaining recognition based on recent mouse genetic studies. Accordingly, many TBI patients have also presented with hormonal dysfunction, increased skeletal fragility, and increased risk of skeletal diseases. Research from animal models suggests that TBI may exacerbate the activation and inactivation of molecular pathways leading to changes in both osteogenesis and bone destruction. TBI has also been found to induce the formation of heterotopic ossification and increased callus formation at sites of muscle or fracture injury through increased vascularization and activation of systemic factors. Recent studies also suggest that the disruption of endocrine factors and neuropeptides caused by TBI may induce adverse skeletal effects. This review will discuss the long-term consequences of TBI on the skeletal system and TBI-induced signaling pathways that contribute to the formation of ectopic bone, altered fracture healing, and reduced bone mass.

The epidemiology and impact of traumatic brain injury: a brief overview.

Jean A Langlois,  Wesley Rutland-Brown,  Marlena M Wald (2015)
Traumatic brain injury (TBI) is an important public health problem in the United States and worldwide. The estimated 5.3 million Americans living with TBI-related disability face numerous challenges in their efforts to return to a full and productive life. This article presents an overview of the epidemiology and impact of TBI.

Roy E. Shore,  Philip Y-I Choi,  J. Andoni Urtizberea … (2006)
Fibrodysplasia ossificans progressiva (FOP) is a rare autosomal dominant disorder of skeletal malformations and progressive extraskeletal ossification. We mapped FOP to chromosome 2q23-24 by linkage analysis and identified an identical heterozygous mutation (617G --> A; R206H) in the glycine-serine (GS) activation domain of ACVR1, a BMP type I receptor, in all affected individuals examined. Protein modeling predicts destabilization of the GS domain, consistent with constitutive activation of ACVR1 as the underlying cause of the ectopic chondrogenesis, osteogenesis and joint fusions seen in FOP.

Hieu Cao,  Keven R. Johnson,  Ernestina Schipani … (2007)
Skeletal development and turnover occur in close spatial and temporal association with angiogenesis. Osteoblasts are ideally situated in bone to sense oxygen tension and respond to hypoxia by activating the hypoxia-inducible factor alpha (HIF alpha) pathway. Here we provide evidence that HIF alpha promotes angiogenesis and osteogenesis by elevating VEGF levels in osteoblasts. Mice overexpressing HIF alpha in osteoblasts through selective deletion of the von Hippel-Lindau gene (Vhl) expressed high levels of Vegf and developed extremely dense, heavily vascularized long bones. By contrast, mice lacking Hif1a in osteoblasts had the reverse skeletal phenotype of that of the Vhl mutants: long bones were significantly thinner and less vascularized than those of controls. Loss of Vhl in osteoblasts increased endothelial sprouting from the embryonic metatarsals in vitro but had little effect on osteoblast function in the absence of blood vessels. Mice lacking both Vhl and Hif1a had a bone phenotype intermediate between those of the single mutants, suggesting overlapping functions of HIFs in bone. These studies suggest that activation of the HIF alpha pathway in developing bone increases bone modeling events through cell-nonautonomous mechanisms to coordinate the timing, direction, and degree of new blood vessel formation in bone.

Specialty section: This article was submitted to Neurotrauma, a section of the journal Frontiers in Neurology