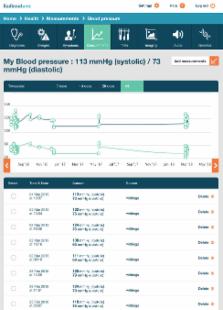 Most electronic health (eHealth) interventions offered to patients serve a single purpose and lack integration with other tools or systems. This is problematic because the majority of patients experience comorbidity and chronic disease, see multiple specialists, and therefore have different needs regarding access to patient data, communication with peers or providers, and self-monitoring of vital signs. A multicomponent digital health cloud service that integrates data sharing, collection, and communication could facilitate patient-centered care in combination with a hospital patient portal and care professionals.

This study aimed to assess the feasibility and functionality of a new cloud-based and multicomponent outpatient clinic, the “Virtual Outpatient Clinic” (VOC).

The VOC consists of 6 digital tools that facilitate self-monitoring (blood pressure, weight, and pain) and communication with peers and providers (chat and videoconferencing) connected to a cloud-based platform and the hospital patient portal to facilitate access to (self-collected) medical data. In this proof-of-concept study, 10 patients from both Departments of Internal Medicine and Dermatology (N=20) used all options of the VOC for 6 weeks. An eNurse offered support to participants during the study. We assessed the feasibility, usage statistics, content, adherence, and identified technical issues. Moreover, we conducted qualitative interviews with all participants by following a standard interview guide to identify user experiences, including barriers, facilitators, and potential effects.

Most participants successfully used all options of the VOC and were positive about different tools and apps and the integral availability of their information. The adherence was 37% (7/19) for weight scale, 58% (11/19) for blood pressure monitor, and 70% (14/20) and 85% (17/20) for pain score and daily questions, respectively. The adherence for personal health record was 65% (13/20) and 60% (12/20) for the patient portal system. Qualitative data showed that performance and effort expectancy scored high among participants, indicating that using the VOC is convenient, easy, and time-saving.

The VOC is a promising integrated Web-based technology that combines self-management, data sharing, and communication between patients and professionals. The system can be personalized by connecting various numbers of components, which could make it a relevant tool for other patient groups. Before a system, such as the VOC, can be implemented in daily practice, prospective studies focused on evaluating outcomes, costs, and patient-centeredness are needed.

Niels Elbert,  Harmieke van Os-Medendorp,  Wilco van Renselaar … (2014)
Background eHealth potentially enhances quality of care and may reduce health care costs. However, a review of systematic reviews published in 2010 concluded that high-quality evidence on the benefits of eHealth interventions was still lacking. Objective We conducted a systematic review of systematic reviews and meta-analyses on the effectiveness/cost-effectiveness of eHealth interventions in patients with somatic diseases to analyze whether, and to what possible extent, the outcome of recent research supports or differs from previous conclusions. Methods Literature searches were performed in PubMed, EMBASE, The Cochrane Library, and Scopus for systematic reviews and meta-analyses on eHealth interventions published between August 2009 and December 2012. Articles were screened for relevance based on preset inclusion and exclusion criteria. Citations of residual articles were screened for additional literature. Included papers were critically appraised using the Preferred Reporting Items for Systematic Reviews and Meta-Analyses (PRISMA) Statement before data were extracted. Based on conclusions drawn by the authors of the included articles, reviews and meta-analyses were divided into 1 of 3 groups: suitable, promising, or limited evidence on effectiveness/cost-effectiveness. Cases of uncertainty were resolved by consensus discussion. Effect sizes were extracted from papers that included a meta-analysis. To compare our results with previous findings, a trend analysis was performed. Results Our literature searches yielded 31 eligible reviews, of which 20 (65%) reported on costs. Seven papers (23%) concluded that eHealth is effective/cost-effective, 13 (42%) underlined that evidence is promising, and others found limited or inconsistent proof. Methodological quality of the included reviews and meta-analyses was generally considered high. Trend analysis showed a considerable accumulation of literature on eHealth. However, a similar percentage of papers concluded that eHealth is effective/cost-effective or evidence is at least promising (65% vs 62%). Reviews focusing primarily on children or family caregivers still remained scarce. Although a pooled (subgroup) analysis of aggregate data from randomized studies was performed in a higher percentage of more recently published reviews (45% vs 27%), data on economic outcome measures were less frequently reported (65% vs 85%). Conclusions The number of reviews and meta-analyses on eHealth interventions in patients with somatic diseases has increased considerably in recent years. Most articles show eHealth is effective/cost-effective or at least suggest evidence is promising, which is consistent with previous findings. Although many researchers advocate larger, well-designed, controlled studies, we believe attention should be given to the development and evaluation of strategies to implement effective/cost-effective eHealth initiatives in daily practice, rather than to further strengthen current evidence.

Susan Woods,  Erin Schwartz,  Anais Tuepker … (2013)
Background Full sharing of the electronic health record with patients has been identified as an important opportunity to engage patients in their health and health care. The My HealtheVet Pilot, the initial personal health record of the US Department of Veterans Affairs, allowed patients and their delegates to view and download content in their electronic health record, including clinical notes, laboratory tests, and imaging reports. Objective A qualitative study with purposeful sampling sought to examine patients’ views and experiences with reading their health records, including their clinical notes, online. Methods Five focus group sessions were conducted with patients and family members who enrolled in the My HealtheVet Pilot at the Portland Veterans Administration Medical Center, Oregon. A total of 30 patients enrolled in the My HealtheVet Pilot, and 6 family members who had accessed and viewed their electronic health records participated in the sessions. Results Four themes characterized patient experiences with reading the full complement of their health information. Patients felt that seeing their records positively affected communication with providers and the health system, enhanced knowledge of their health and improved self-care, and allowed for greater participation in the quality of their care such as follow-up of abnormal test results or decision-making on when to seek care. While some patients felt that seeing previously undisclosed information, derogatory language, or inconsistencies in their notes caused challenges, they overwhelmingly felt that having more, rather than less, of their health record information provided benefits. Conclusions Patients and their delegates had predominantly positive experiences with health record transparency and the open sharing of notes and test results. Viewing their records appears to empower patients and enhance their contributions to care, calling into question common provider concerns about the effect of full record access on patient well-being. While shared records may or may not impact overall clinic workload, it is likely to change providers’ work, necessitating new types of skills to communicate and partner with patients.

Multimorbidity and comorbidity in the Dutch population – data from general practices

This is an open-access article distributed under the terms of the Creative Commons Attribution License ( https://creativecommons.org/licenses/by/4.0/), which permits unrestricted use, distribution, and reproduction in any medium, provided the original work, first published in the Journal of Medical Internet Research, is properly cited. The complete bibliographic information, a link to the original publication on http://www.jmir.org/.as well as this copyright and license information must be included.