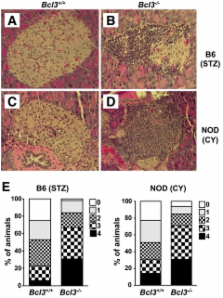 It has long been recognized that autoimmunity is often associated with immunodeficiency. The mechanism underlying this paradox is not well understood. Bcl-3 (B-cell lymphoma 3) is an atypical member of the IκB (inhibitor of the nuclear factor-κB) family that is required for lymphoid organogenesis and germinal center responses. Mice deficient in Bcl-3 are immunodeficient because of the microarchitectural defects of their lymphoid organs. The goal of this study is to define the potential roles of Bcl-3 in type 1 diabetes.

Bcl-3–deficient NOD mice were generated by backcrossing Bcl-3–deficient C57BL/6 mice to NOD mice. Spontaneous and induced type 1 diabetes were studied in these mice by both pathologic and immunologic means. The effect of Bcl-3 on inflammatory gene transcription was evaluated in a promoter reporter assay.

We found that Bcl-3–deficient NOD and C57BL/6 mice were, paradoxically, more susceptible to autoimmune diabetes than wild-type mice. The increase in diabetes susceptibility was caused by Bcl-3 deficiency in hematopoietic cells but not nonhematopoietic cells. Bcl-3 deficiency did not significantly affect anti-islet Th1 or Th2 autoimmune responses, but markedly increased inflammatory chemokine and T helper 17 (Th17)-type cytokine expression. Upon transfection, Bcl-3 significantly inhibited the promoter activities of inflammatory chemokine and cytokine genes.

Ian Gilmore (2006)
This article serves as an introduction to the collection of reviews on nuclear factor-kappaB (NF-kappaB). It provides an overview of the discovery and current status of NF-kappaB as a research topic. Described are the structures, activities and regulation of the proteins in the NF-kappaB family of transcription factors. NF-kappaB signaling is primarily regulated by inhibitor kappaB (IkappaB) proteins and the IkappaB kinase complex through two major pathways: the canonical and non-canonical NF-kappaB pathways. The organization and focus of articles included in the following reviews are described, as well as likely future areas of research interest on NF-kappaB.

E Schleicher,  A Bierhaus,  M Andrassy … (2001)
Activation of the transcription factor nuclear factor-kappaB (NF-kappaB) has been suggested to participate in chronic disorders, such as diabetes and its complications. In contrast to the short and transient activation of NF-kappaB in vitro, we observed a long-lasting sustained activation of NF-kappaB in the absence of decreased IkappaBalpha in mononuclear cells from patients with type 1 diabetes. This was associated with increased transcription of NF-kappaBp65. A comparable increase in NF-kappaBp65 antigen and mRNA was also observed in vascular endothelial cells of diabetic rats. As a mechanism, we propose that binding of ligands such as advanced glycosylation end products (AGEs), members of the S100 family, or amyloid-beta peptide (Abeta) to the transmembrane receptor for AGE (RAGE) results in protein synthesis-dependent sustained activation of NF-kappaB both in vitro and in vivo. Infusion of AGE-albumin into mice bearing a beta-globin reporter transgene under control of NF-kappaB also resulted in prolonged expression of the reporter transgene. In vitro studies showed that RAGE-expressing cells induced sustained translocation of NF-kappaB (p50/p65) from the cytoplasm into the nucleus for >1 week. Sustained NF-kappaB activation by ligands of RAGE was mediated by initial degradation of IkappaB proteins followed by new synthesis of NF-kappaBp65 mRNA and protein in the presence of newly synthesized IkappaBalpha and IkappaBbeta. These data demonstrate that ligands of RAGE can induce sustained activation of NF-kappaB as a result of increased levels of de novo synthesized NF-kappaBp65 overriding endogenous negative feedback mechanisms and thus might contribute to the persistent NF-kappaB activation observed in hyperglycemia and possibly other chronic diseases.

The nonobese diabetic mouse as a model of autoimmune diabetes: immune dysregulation gets the NOD.