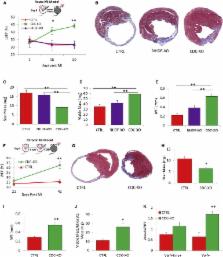 The CADUCEUS trial of cardiosphere-derived cells (CDCs) has shown that it may be possible to regenerate injured heart muscle previously thought to be permanently scarred. The mechanisms of benefit are known to be indirect, but the mediators have yet to be identified. Here we pinpoint exosomes secreted by human CDCs as critical agents of regeneration and cardioprotection. CDC exosomes inhibit apoptosis and promote proliferation of cardiomyocytes, while enhancing angiogenesis. Injection of exosomes into injured mouse hearts recapitulates the regenerative and functional effects produced by CDC transplantation, whereas inhibition of exosome production by CDCs blocks those benefits. CDC exosomes contain a distinctive complement of microRNAs, with particular enrichment of miR-146a. Selective administration of a miR-146a mimic reproduces some (but not all) of the benefits of CDC exosomes. The findings identify exosomes as key mediators of CDC-induced regeneration, while highlighting the potential utility of exosomes as cell-free therapeutic candidates.

Marbán and colleagues pinpoint exosomes as critical mediators of myocardial regeneration triggered by cardiosphere-derived cells (CDCs). CDC exosomes inhibit apoptosis, promote proliferation of cardiomyocytes, and enhance angiogenesis. Injection of exosomes into injured mouse hearts recapitulates the CDC effect. CDC exosomes contain a distinctive complement of microRNAs, including miR-146a, that reproduces some of the benefits of CDC exosomes. Our findings highlight the utility of exosomes as therapeutic candidates.

K. Teng,  M Adam Mahmood,  C Wu … (1985)
Using ferritin-labeled protein A and colloidal gold-labeled anti-rabbit IgG, the fate of the sheep transferrin receptor has been followed microscopically during reticulocyte maturation in vitro. After a few minutes of incubation at 37 degrees C, the receptor is found on the cell surface or in simple vesicles of 100-200 nm, in which the receptor appears to line the limiting membrane of the vesicles. With time (60 min or longer), large multivesicular elements (MVEs) appear whose diameter may reach 1-1.5 micron. Inside these large MVEs are round bodies of approximately 50-nm diam that bear the receptor at their external surfaces. The limiting membrane of the large MVEs is relatively free from receptor. When the large MVEs fuse with the plasma membrane, their contents, the 50-nm bodies, are released into the medium. The 50-nm bodies appear to arise by budding from the limiting membrane of the intracellular vesicles. Removal of surface receptor with pronase does not prevent exocytosis of internalized receptor. It is proposed that the exocytosis of the approximately 50-nm bodies represents the mechanism by which the transferrin receptor is shed during reticulocyte maturation.

Alessandro Giacomello,  Joshua Hare,  M K Leppo … (2007)
Ex vivo expansion of resident cardiac stem cells, followed by delivery to the heart, may favor regeneration and functional improvement. Percutaneous endomyocardial biopsy specimens grown in primary culture developed multicellular clusters known as cardiospheres, which were plated to yield cardiosphere-derived cells (CDCs). CDCs from human biopsy specimens and from comparable porcine samples were examined in vitro for biophysical and cytochemical evidence of cardiogenic differentiation. In addition, human CDCs were injected into the border zone of acute myocardial infarcts in immunodeficient mice. Biopsy specimens from 69 of 70 patients yielded cardiosphere-forming cells. Cardiospheres and CDCs expressed antigenic characteristics of stem cells at each stage of processing, as well as proteins vital for cardiac contractile and electrical function. Human and porcine CDCs cocultured with neonatal rat ventricular myocytes exhibited biophysical signatures characteristic of myocytes, including calcium transients synchronous with those of neighboring myocytes. Human CDCs injected into the border zone of myocardial infarcts engrafted and migrated into the infarct zone. After 20 days, the percentage of viable myocardium within the infarct zone was greater in the CDC-treated group than in the fibroblast-treated control group; likewise, left ventricular ejection fraction was higher in the CDC-treated group. A method is presented for the isolation of adult human stem cells from endomyocardial biopsy specimens. CDCs are cardiogenic in vitro; they promote cardiac regeneration and improve heart function in a mouse infarct model, which provides motivation for further development for therapeutic applications in patients.