FIB-SEM tomography of human skin telocytes and their extracellular vesicles 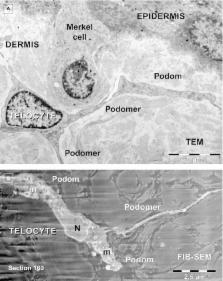 Graça Raposo,  Willem Stoorvogel (2013)
Cells release into the extracellular environment diverse types of membrane vesicles of endosomal and plasma membrane origin called exosomes and microvesicles, respectively. These extracellular vesicles (EVs) represent an important mode of intercellular communication by serving as vehicles for transfer between cells of membrane and cytosolic proteins, lipids, and RNA. Deficiencies in our knowledge of the molecular mechanisms for EV formation and lack of methods to interfere with the packaging of cargo or with vesicle release, however, still hamper identification of their physiological relevance in vivo. In this review, we focus on the characterization of EVs and on currently proposed mechanisms for their formation, targeting, and function.

Minimal experimental requirements for definition of extracellular vesicles and their functions: a position statement from the International Society for Extracellular Vesicles

Jan Lötvall,  Andrew Hill,  Fred Hochberg … (2014)
Secreted membrane-enclosed vesicles, collectively called extracellular vesicles (EVs), which include exosomes, ectosomes, microvesicles, microparticles, apoptotic bodies and other EV subsets, encompass a very rapidly growing scientific field in biology and medicine. Importantly, it is currently technically challenging to obtain a totally pure EV fraction free from non-vesicular components for functional studies, and therefore there is a need to establish guidelines for analyses of these vesicles and reporting of scientific studies on EV biology. Here, the International Society for Extracellular Vesicles (ISEV) provides researchers with a minimal set of biochemical, biophysical and functional standards that should be used to attribute any specific biological cargo or functions to EVs.

TELOCYTES – a case of serendipity: the winding way from Interstitial Cells of Cajal (ICC), via Interstitial Cajal-Like Cells (ICLC) to TELOCYTES

L Popescu,  Maria-Simonetta Faussone-Pellegrini (2010)
Abstract Ramon y Cajal discovered a particular cell type in the gut, which he named ‘interstitial neurons’ more that 100 years ago. In the early 1970s, electron microscopy/electron microscope (EM) studies showed that indeed a special interstitial cell type corresponding to the cells discovered by Cajal is localized in the gut muscle coat, but it became obvious that they were not neurons. Consequently, they were renamed ‘interstitial cells of Cajal’ (ICC) and considered to be pace-makers for gut motility. For the past 10 years many groups were interested in whether or not ICC are present outside the gastrointestinal tract, and indeed, peculiar interstitial cells were found in: upper and lower urinary tracts, blood vessels, pancreas, male and female reproductive tracts, mammary gland, placenta, and, recently, in the heart as well as in the gut. Such cells, now mostly known as interstitial Cajal-like cells (ICLC), were given different and confusing names. Moreover, ICLC are only apparently similar to canonical ICC. In fact, EM and cell cultures revealed very particular features of ICLC, which unequivocally distinguishes them from ICC and all other interstitial cells: the presence of 2–5 cell body prolongations that are very thin (less than 0.2 μm, under resolving power of light microscopy), extremely long (tens to hundreds of μm), with a moniliform aspect (many dilations along), as well as caveolae. Given the unique dimensions of these prolongations (very long and very thin) and to avoid further confusion with other interstitial cell types (e.g. fibroblast, fibrocyte, fibroblast-like cells, mesenchymal cells), we are proposing the term TELOCYTES for them, and TELOPODES for their prolongations, by using the Greek affix ‘telos’.