Pharmacokinetics of conivaptan use in patients with severe hepatic impairment 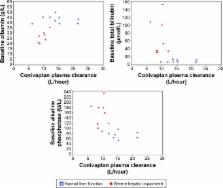 Conivaptan is an intravenous dual V 1A/V 2 vasopressin antagonist approved for the treatment of euvolemic and hypervolemic hyponatremia. Earlier studies showed that patients with moderate liver disease could be safely treated with conivaptan by reducing the dose by 50%, whereas patients with mild hepatic impairment needed no dose adjustment. The objective of this Phase 1, open-label study was to assess the pharmacokinetics, protein binding, and safety of 48 h of conivaptan infusion in individuals with severe hepatic impairment.

Eight subjects with severe hepatic impairment (Child–Pugh score 10–15) and nine subjects with normal liver function were enrolled. Intravenous conivaptan (20 mg) was given as a 30 min loading dose on Day 1 followed by two consecutive 20 mg continuous infusions over 24 h each. Subjects were monitored for adverse events and changes in clinical laboratory parameters. Plasma and urine pharmacokinetic samples were collected at defined times. Subjects were followed through Study Day 5.

Hyponatremia in cirrhosis: Results of a patient population survey.

Consequences of Inadequate Management of Hyponatremia

Horacio Adrogué (2005)
Dilutional hyponatremia is a commonly observed disorder in hospitalized patients. It represents an excess of water in relation to prevailing sodium stores and is most often associated with a high plasma level of arginine vasopressin, including that found in patients with the syndrome of inappropriate antidiuretic hormone secretion. Hyponatremia may be classified as either acute or chronic depending on the rate of decline of serum sodium concentration, and can lead to a wide range of deleterious changes involving almost all body systems. Serious complications of dilutional hyponatremia most frequently involve the central nervous system. In fact, acute severe hyponatremia is potentially life-threatening and must be treated promptly and aggressively. Chronic hyponatremia often develops in patients with nonrenal diseases and is associated with increased morbidity and mortality. In patients hospitalized for congestive heart failure, hyponatremia is linked to a poor prognosis and increased length of hospital stay. Prompt recognition and optimal management of hyponatremia in hospitalized patients may reduce in-hospital mortality and symptom severity, allow for less intensive hospital care, decrease the duration of hospitalization and associated costs, and improve the treatment of underlying comorbid conditions and patients’ quality of life. The proper treatment of dilutional hyponatremia, especially when chronic, must avoid increasing serum sodium too rapidly, which can lead to permanent or fatal neurologic sequelae. The treatment of hyponatremia may be facilitated by emerging therapies that block the actions of arginine vasopressin at V 2 and V 1a receptors to promote aquaresis, the electrolyte-sparing elimination of free water, and elevate serum sodium concentrations.