Urinary Plasmin(ogen) as a Prognostic Factor for Hypertension 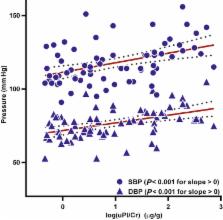 Plasmin and its precursor, plasminogen, are detectable in urine from patients with glomerular disease. Urinary plasmin(ogen) levels correlate with blood pressure (BP) and may contribute to renal Na + retention by activating the epithelial Na + channel (ENaC). In a longitudinal nested-cohort study, we asked whether urinary plasmin(ogen) levels predict subsequent increase in BP, incident hypertension, or mortality in subjects with type I diabetes, who often develop proteinuria.

This is the first long-term prospective study addressing clinical outcomes associated with increased urinary plasmin(ogen). Findings are consistent with a role for plasmin(ogen) in promoting increased BP, but also demonstrate the difficulty in distinguishing effects due to plasmin(ogen) from those of albuminuria.

G Pambianco,  P. Becker,  Tina Costacou … (2006)
Declining incidences in Europe of overt nephropathy, proliferative retinopathy, and mortality in type 1 diabetes have recently been reported. However, comparable data for the U.S. and trend data for neuropathy and macrovascular complications are lacking. These issues are addressed using the prospective observational Pittsburgh Epidemiology of Childhood-Onset Diabetes Complications Study. Participants were stratified into five cohorts by diagnosis year: 1950-1959, 1960-1964, 1965-1969, 1970-1974, and 1975-1980. Mortality, renal failure, and coronary artery disease (CAD) status were determined on the complete cohort (n = 906) at 20, 25, and 30 years. Overt nephropathy, proliferative retinopathy, and neuropathy were assessed at 20 and 25 years on the subset of participants with a clinical examination. There was a decreasing trend by diagnosis year for mortality, renal failure, and neuropathy across all time intervals (P < 0.05), with the 1950-1959 cohort having a fivefold higher mortality at 25 years than the 1970s' cohorts. Proliferative retinopathy and overt nephropathy showed nonsignificant declines at 20 years (P < 0.16 and P < 0.13, respectively) and no change at 25 years. CAD event rates, which were lower than the other complications, also showed no trend. Although some type 1 diabetes complications (mortality, renal failure, and neuropathy) are declining, others (CAD, overt nephropathy, and proliferative retinopathy) show less favorable changes by 30 years.

Prevalence of complications in IDDM by sex and duration. Pittsburgh Epidemiology of Diabetes Complications Study II.

T Orchard,  R Laporte,  Charles J. Dorman … (1990)
The prevalence of and interrelationships among all four major complications of insulin-dependent diabetes mellitus (IDDM) and their risk factors are being examined in a large epidemiologic study of IDDM subjects diagnosed in childhood. This article focuses on the baseline prevalence of complications in the 657 subjects diagnosed between 1950 and 1980 and currently aged 8-48 yr, with a mean duration of 20 yr. In addition to background retinopathy being virtually universal after 20 yr of diabetes, proliferative retinopathy affects 70% of IDDM subjects after 30 yr duration. As with overt nephropathy, prevalence of proliferative retinopathy is marginally higher in females than in males at short durations; the previously reported male excess is limited to the subjects with IDDM of longer duration (greater than or equal to 25 yr). Somewhat different patterns of microalbuminuria are also seen by sex. Males show a threefold increase in prevalence from 10 to 25 yr duration, whereas females show a more constant prevalence across these durations. A further rise in microalbuminuria is seen in males but not females at greater than or equal to 30 yr duration, giving a combined prevalence of microalbuminuria and overt nephropathy at greater than or equal to 30 yr duration of 84% (males) and 59% (females). Distal symmetrical polyneuropathy shows a constant rise with duration and is only marginally higher in men. Prevalence of cardiovascular (coronary and cerebral) disease shows no sex difference, whereas peripheral vascular disease is particularly common in women after 30 yr duration (greater than 30%) compared with men (11%) when determined by ankle/arm blood pressure ratio less than 0.8 at rest or after exercise.(ABSTRACT TRUNCATED AT 250 WORDS)

In the absence of renal disease, 20 year mortality risk in type 1 diabetes is comparable to that of the general population: a report from the Pittsburgh Epidemiology of Diabetes Complications Study.