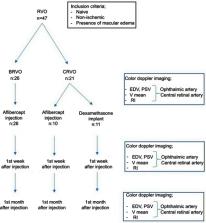 To determine the early effects of intravitreal anti-VEGF and dexamethasone application on blood flow velocities in patients with retinal vein occlusions.

The ophthalmic (OA) and the central retinal arteries (CRAs) of the affected and unaffected eyes of 21 patients with central retinal vein occlusion (CRVO), and 26 patients with branch retinal vein occlusion (BRVO) were investigated by Color Doppler imaging (CDI). Peak systolic volume (PSV), end diastolic volume (EDV), and average blood velocity (Vmean) of the CRA and OA were measured and resistive indexes (RI) were calculated at pre-injection and the 1st week and 1st month post-injection.

There was no statistically significant difference between the OA values for affected and unaffected eyes in the CRVO group before treatment. The CRA, EDV, and Vmean values were significantly lower in affected eyes. Blood flow velocities of both CRA and OA were not significantly different than in the fellow unaffected eyes in the BRVO group. The differences between PSV, EDV, and Vmean measurements of OA and CRA at different times pre- and post-injection in response to anti-VEGF and dexamethasone treatment in the CRVO group were significant; but there was no difference in RI value. OA blood flow velocity measurements were not statistically different post-injection in the BRVO group; however, the values of PSV and EDV of CRA decreased post-injection.

S Sperduto (corresponding) (1996)
To identify possible risk factors for central retinal vein occlusion (CRVO). Between May 1, 1986, and December 31, 1990, 258 patients with CRVO and 1142 controls were identified at five clinical centers. Data were obtained through interviews, clinical examinations, and laboratory analyses of blood specimens. An increased risk of CRVO was found in persons with systemic hypertension, diabetes mellitus, and open-angle glaucoma. Risk of CRVO decreased with increasing levels of physical activity and increasing levels of alcohol consumption. In women, risk of occlusion decreased with use of postmenopausal estrogens and increased with higher erythrocyte sedimentation rates. Cardiovascular disease, electrocardiographic abnormalities, history of treatment of diabetes mellitus, higher blood glucose levels, lower albumin-globulin ratios, and higher alpha-globulin levels were associated with increased risk only for ischemic CRVO. Systemic hypertension was associated with increased risk for ischemic and nonischemic CRVO, but odds ratios were greater for the ischemic type. Our results suggest a cardiovascular risk profile for persons with CRVO, in particular, patients with the ischemic type. The findings reinforce recommendations to diagnose and treat systemic hypertension, advise patients to increase physical exercise, and consider use of exogenous estrogens in postmenopausal women.

The role of vascular endothelial growth factor in angiogenesis.

Lynn Gerber,  Napoleone Ferrara (2000)
Vascular endothelial growth factor (VEGF) is an endothelial cell-specific mitogen and an angiogenic inducer as well as a mediator of vascular permeability. The biological effects of VEGF are mediated by two tyrosine kinase receptors, Flt-1 (VEGFr-1) and KDR (VEGFR-2). VEGF is essential for developmental angiogenesis and is also required for female reproductive functions and endochondral bone formation. Substantial evidence also implicates VEGF in tumors and intraocular neovascular syndromes. Currently, several clinical trials are ongoing to test the hypothesis that inhibition of VEGF activity may be beneficial for these conditions. Copyright 2001 S. Karger AG, Basel