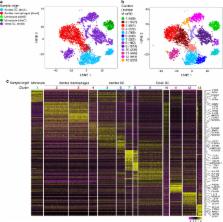 Presentation of exogenous antigens on MHC-I molecules, termed cross-presentation, is essential for cytotoxic CD8 + T cell responses. In mice, dendritic cells (DCs) that arise from monocytes (mo-DCs) during inflammation have a key function in these responses by cross-presenting antigens locally in peripheral tissues. Whether human naturally-occurring mo-DCs can cross-present is unknown. Here, we use human mo-DCs and macrophages directly purified from ascites to address this question. Single-cell RNA-seq data show that ascites CD1c + DCs contain exclusively monocyte-derived cells. Both ascites mo-DCs and monocyte-derived macrophages cross-present efficiently, but are inefficient for transferring exogenous proteins into their cytosol. Inhibition of cysteine proteases, but not of proteasome, abolishes cross-presentation in these cells. We conclude that human monocyte-derived cells cross-present exclusively using a vacuolar pathway. Finally, only ascites mo-DCs provide co-stimulatory signals to induce effector cytotoxic CD8 + T cells. Our findings thus provide important insights on how to harness cross-presentation for therapeutic purposes.

Cross-presentation, or the presentation of exogenous antigens on MHC-I, is thought to be restricted to dendritic cells (DCs). Here the authors show that human DCs and macrophages developed in vivo from monocytes can both perform cross-presentation using a non-conventional pathway, but only DCs are capable of inducing cytotoxic CD8 + T cells.

Anne Hosmalin,  Maxime Touzot,  Antonio Cappuccio … (2013)
Dendritic cells (DCs) are critical regulators of immune responses. Under noninflammatory conditions, several human DC subsets have been identified. Little is known, however, about the human DC compartment under inflammatory conditions. Here, we characterize a DC population found in human inflammatory fluids that displayed a phenotype distinct from macrophages from the same fluids and from steady-state lymphoid organ and blood DCs. Transcriptome analysis showed that they correspond to a distinct DC subset and share gene signatures with in vitro monocyte-derived DCs. Moreover, human inflammatory DCs, but not inflammatory macrophages, stimulated autologous memory CD4(+) T cells to produce interleukin-17 and induce T helper 17 (Th17) cell differentiation from naive CD4(+) T cells through the selective secretion of Th17 cell-polarizing cytokines. We conclude that inflammatory DCs represent a distinct human DC subset and propose that they are derived from monocytes and are involved in the induction and maintenance of Th17 cell responses. Copyright © 2013 Elsevier Inc. All rights reserved.