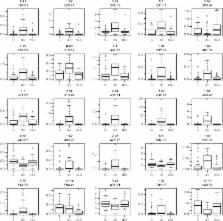 Exacerbations are a leading cause of morbidity in COPD. The objective of this study was to identify metabolomic biomarkers of acute exacerbations of COPD (AECOPD).

We measured metabolites via mass spectrometry (MS) in plasma drawn within 24 hours of admission to the hospital for 33 patients with an AECOPD (day 0) and 30 days later and for 65 matched controls. Individual metabolites were measured via selective reaction monitoring with mass spectrometry. We used a mixed-effect model to compare metabolite levels in cases compared to controls and a paired t-test to test for differences between days 0 and 30 in the AECOPD group.

Patients with AECOPD have a unique metabolomic signature that includes a decrease in tryptophan levels consistent with an increase in indoleamine 2,3-dioxygenase activity.

Tryptophan catabolism in cancer: beyond IDO and tryptophan depletion.

Edwin van den Oord,  Michael Platten,  Wolfgang Wick (2012)
Tryptophan catabolism in cancer is increasingly being recognized as an important microenvironmental factor that suppresses antitumor immune responses. It has been proposed that the essential amino acid tryptophan is catabolized in the tumor tissue by the rate-limiting enzyme indoleamine-2,3-dioxygenase (IDO) expressed in tumor cells or antigen-presenting cells. This metabolic pathway creates an immunosuppressive milieu in tumors and in tumor-draining lymph nodes by inducing T-cell anergy and apoptosis through depletion of tryptophan and accumulation of immunosuppressive tryptophan catabolites. Competitive inhibitors of IDO are currently being tested in clinical trials in patients with solid cancer, with the aim of enhancing the efficacy of conventional chemotherapy. There are, however, certain tumor types that are capable of catabolizing tryptophan but are largely IDO-negative. Recent evidence from studies in malignant gliomas and other types of cancers points to alternative enzymatic pathways of tryptophan catabolism involving tryptophan-2,3-dioxygenase (TDO). TDO, which is considered responsible for regulating systemic tryptophan levels in the liver, is constitutively expressed in some cancers and is equally capable of suppressing antitumor immune responses. Depletion of tryptophan induces signaling events in T cells, leading to anergy and apoptosis; however, active immunomodulation by accumulating tryptophan catabolites, most notably kynurenine, appears to play an equally important role. These immunomodulatory effects of kynurenine are mediated by the aryl hydrocarbon receptor. This intracellular transcription factor has classically been viewed as a receptor for environmental toxins, such as dioxin, and its important role in influencing immune responses, especially in epithelial barriers, is only beginning to emerge. This review summarizes the exciting developments in our understanding of tryptophan catabolism as a key factor in the immunobiology of cancer. ©2012 AACR.

Immune escape as a fundamental trait of cancer: focus on IDO.

Franklyn G. Prendergast (2008)
Immune escape is a critical gateway to malignancy. The emergence of this fundamental trait of cancer represents the defeat of immune surveillance, a potent, multi-armed and essential mode of cancer suppression that may influence the ultimate clinical impact of an early stage tumor. Indeed, immune escape may be a central modifier of clinical outcomes, by affecting tumor dormancy versus progression, licensing invasion and metastasis and impacting therapeutic response. Although relatively little studied until recently, immune suppression and escape in tumors are now hot areas with clinical translation of several new therapeutic agents already under way. The interconnections between signaling pathways that control immune escape and those that control proliferation, senescence, apoptosis, metabolic alterations, angiogenesis, invasion and metastasis remain virtually unexplored, offering rich new areas for investigation. Here, an overview of this area is provided with a focus on the tryptophan catabolic enzyme indoleamine 2,3-dioxygenase (IDO) and its recently discovered relative IDO2 that are implicated in suppressing T-cell immunity in normal and pathological settings including cancer. Emerging evidence suggests that during cancer progression activation of the IDO pathway might act as a preferred nodal modifier pathway for immune escape, for example analogous to the PI3K pathway for survival or the VEGF pathway for angiogenesis. Small molecule inhibitors of IDO and IDO2 heighten chemotherapeutic efficacy in mouse models of cancer in a nontoxic fashion and an initial lead compound entered phase I clinical trials in late 2007. New modalities in this area offer promising ways to broaden the combinatorial attack on advanced cancers, where immune escape mechanisms likely provide pivotal support.

C D Broeckling,  F Afsar,  Ana Neumann … (2014)
Metabolomic data are frequently acquired using chromatographically coupled mass spectrometry (MS) platforms. For such datasets, the first step in data analysis relies on feature detection, where a feature is defined by a mass and retention time. While a feature typically is derived from a single compound, a spectrum of mass signals is more a more-accurate representation of the mass spectrometric signal for a given metabolite. Here, we report a novel feature grouping method that operates in an unsupervised manner to group signals from MS data into spectra without relying on predictability of the in-source phenomenon. We additionally address a fundamental bottleneck in metabolomics, annotation of MS level signals, by incorporating indiscriminant MS/MS (idMS/MS) data implicitly: feature detection is performed on both MS and idMS/MS data, and feature-feature relationships are determined simultaneously from the MS and idMS/MS data. This approach facilitates identification of metabolites using in-source MS and/or idMS/MS spectra from a single experiment, reduces quantitative analytical variation compared to single-feature measures, and decreases false positive annotations of unpredictable phenomenon as novel compounds. This tool is released as a freely available R package, called RAMClustR, and is sufficiently versatile to group features from any chromatographic-spectrometric platform or feature-finding software.

For the COPD Clinical Research Network