Parietal Block Using Bupivacaine in the Rat: An Anatomical, Behavioral and Histological Study 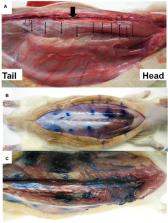 Animal models of regional anaesthesia are useful for studying the effects of blocks and improve their efficacy. The aim of our experiments was to validate a multi-site paravertebral block in the rat.

Dissection and indigo carmine dye injection were performed in five rats (3 rats were dissected and 2 were dye injected). In other groups (n=7rats/group), after inflammation inductive carrageenan injection in the abdominal wall, bupivacaine or saline was injected laterally to the spinal column at the T5, T10, L1, L4 and S1 level. The efficacy of the block on mechanical nociception was measured using von Frey hairs. In addition, we measured c-Fos immunoreactive nuclei in the cord.

The multi-site injection showed a perinervous distribution of the injected solution without intra-thoracic, intra-abdominal or epidural diffusion. Bilateral block with a relatively small volume of bupivacaine (0.5 mL) significantly increased the threshold to mechanical pain as compared to control (p=0.007) and significantly decreased the number of c-Fos immunoreactive nuclei in the posterior horn of the spinal cord (p<0.0001).

This study shows that a parietal abdominal wall block is easy to perform in the rat. This block allows investigators to explore the mechanisms of action of abdominal parietal wall blocks.

S Hunt,  Luigi Pini,  G Evan (2015)
It has been suggested that the proto-oncogenes c-fos and c-myc participate in the control of genetic events which lead to the establishment of prolonged functional changes in neurons. Expression of c-fos and c-myc are among the earliest genetic events induced in cultured fibroblast and phaeochromocytoma cell lines by various stimuli including growth factors, peptides and the intracellular second messengers diacylglycerol, cAMP and Ca2+. We report here that physiological stimulation of rat primary sensory neurons causes the expression of c-fos-protein-like immunoreactivity in nuclei of postsynaptic neurons of the dorsal horn of the spinal cord. Activation of small-diameter cutaneous sensory afferents by noxious heat or chemical stimuli results in the rapid appearance of c-fos-protein-like immunoreactivity in the superficial layers of the dorsal horn. However, activation of low-threshold cutaneous afferents results in fewer labelled cells with a different laminar distribution. No c-fos induction was seen in the dorsal root ganglia, gracile nucleus or ventral horn. Thus, synaptic transmission may induce rapid changes in gene expression in certain postsynaptic neurons.

Paul de Jonge,  G Boeckxstaens (2009)
Postoperative ileus (POI) is a common clinical condition arising after almost every abdominal surgical procedure, leading to increased patient morbidity and prolonged hospitalisation. Recent advances in insight into the underlying pathophysiology have identified intestinal inflammation triggered by handling of the intestine as the main mechanism. Not only does the local inflammatory process compromise the contractile activity of the handled intestine, but it also activates inhibitory neural pathways and possibly triggers inflammation at distant untouched areas, leading to a generalised impairment of gastrointestinal motility. Macrophages residing in the muscularis externa and mast cells are the key players in this inflammatory cascade. Pharmacological interventions preventing the activation of these immune cells reduce the influx of leucocytes into the intestine, an effect associated with a reduction of the duration of POI. New potential therapeutic strategies to shorten POI based on these new insights will undoubtedly enter the clinical arena soon.

Neurologic evaluation of the rat during sciatic nerve block with lidocaine.

Gary Strichartz,  Johann Thalhammer,  M Vladimirova … (1995)
Quantitative behavioral testing is necessary to establish a reproducible measure of differential functional blockade during regional anesthesia. Methods for assessment of the neurologic status (mental status, posture, gait, proprioception, motor function, autonomic function, and nociception) in veterinary neurology were adapted for the rat and used to monitor functional changes separately during a sciatic nerve block. Sprague-Dawley rats were acclimated to laboratory routine before the study so that lidocaine (0.1 ml, 1%) could be injected near the sciatic notch without any chemical restraint. The onset, duration, and magnitude of functional losses were monitored. Proprioceptive integrity was evaluated by assessing the response to tactile placing and the hopping response. Extensor postural thrust, a test for postural reactions in small animals, was assessed on a digital balance and found adequate for quantifying motor function. Analgesia was assessed by measuring withdrawal response latencies to noxious thermal stimulation (51 degrees C) and to superficial and deep noxious pinches. Autonomic function was monitored by measuring skin temperature. Contralateral limb function was used as an internal control, and injection of saline was used as an external control in separate, control animals. Onset of postural and gait abnormalities were observed as early as 40 s after injection. On each occasion proprioceptive impairment was detected first, followed by impairment of motor function and nociception. Complete absence of proprioception occurred from 10 to 30 min (n = 9) and of motor function at 30 min after injection (n = 10); both functions were fully recovered by 120 min. A unilateral increase in skin temperature on the foot was detected by 1 min; had reached its maximum change, 5.3 +/- 0.7 degrees C, at 10 min; and had returned to control levels at 60 min after injection (n = 12). Withdrawal response to cutaneous or superficial pain was absent in all ten animals from 5 to 30 min whereas the response to deep pain was absent in all ten animals at 20 min only. The response to noxious stimulation recovered at 90 min. Attention was paid to the temporal relation of the impairment of various functions. Quantitative observations of the onset, offset, and intensity of differential functional impairment or block over time will make it possible to establish the doses and conditions for local anesthetics that result in differential nerve block and will permit comparison of these changes among different drugs and "clinical" protocols.