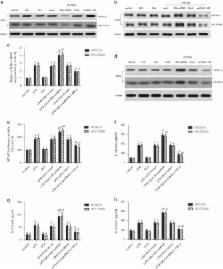 Periodontitis is a common chronic inflammatory disease. Recent studies have shown that chronic stress (CS) might modulate periodontal disease, but there are few models of CS-induced periodontitis, and the underlying mechanisms are unclear. The present study established a rat model of periodontitis associated with CS induced by nylon thread ligatures. The severity of periodontitis was evaluated in this model by radiographic and pathological examination. The inflammatory reaction indicated by the elevated serum levels of interleukin (IL)-1β, IL-6 and IL-8 was assessed by enzyme-linked immunosorbent assay. Toll-like receptor-4 (TLR4) and glucocorticoid receptor-α (GR-α) expressions were detected by reverse transcriptase-PCR and western blotting. Open-field tests and serum corticosterone were used to evaluate CS. The results showed that CS induced behavioral changes and increased corticosterone levels of the animals with periodontitis. CS stimulation markedly increased alveolar bone loss, periodontal pocket depth and the number of plaques. It also enhanced the inflammatory reaction. These results suggest that CS accelerated the ligature-induced pathological changes associated with periodontitis. Further analysis of the mechanisms involved showed that GR-α expression was significantly downregulated in periodontal tissues of the animals undergoing CS. Blocking GR-α signaling in lipopolysaccharide and corticosteroid-treated human periodontal ligament fibroblast cells in vitro significantly upregulated the expression of p-Akt (protein kinase B) and TLR4, promoted nuclear factor-κB activity and increased levels of IL-1β, IL-6 and IL-8. This research suggests that CS might accelerate the pathological progression of periodontitis by a GR-α signaling-mediated inflammatory response and that this may be a potential therapeutic target for the treatment of periodontal disease, particularly in patients with CS.

Richard Darveau (2010)
Periodontitis, or gum disease, affects millions of people each year. Although it is associated with a defined microbial composition found on the surface of the tooth and tooth root, the contribution of bacteria to disease progression is poorly understood. Commensal bacteria probably induce a protective response that prevents the host from developing disease. However, several bacterial species found in plaque (the 'red-complex' bacteria: Porphyromonas gingivalis, Tannerella forsythia and Treponema denticola) use various mechanisms to interfere with host defence mechanisms. Furthermore, disease may result from 'community-based' attack on the host. Here, I describe the interaction of the host immune system with the oral bacteria in healthy states and in diseased states.

Stress revisited: a critical evaluation of the stress concept.

J.M. Koolhaas,  A Bartolomucci,  B Buwalda … (2011)
With the steadily increasing number of publications in the field of stress research it has become evident that the conventional usage of the stress concept bears considerable problems. The use of the term 'stress' to conditions ranging from even the mildest challenging stimulation to severely aversive conditions, is in our view inappropriate. Review of the literature reveals that the physiological 'stress' response to appetitive, rewarding stimuli that are often not considered to be stressors can be as large as the response to negative stimuli. Analysis of the physiological response during exercise supports the view that the magnitude of the neuroendocrine response reflects the metabolic and physiological demands required for behavioural activity. We propose that the term 'stress' should be restricted to conditions where an environmental demand exceeds the natural regulatory capacity of an organism, in particular situations that include unpredictability and uncontrollability. Physiologically, stress seems to be characterized by either the absence of an anticipatory response (unpredictable) or a reduced recovery (uncontrollable) of the neuroendocrine reaction. The consequences of this restricted definition for stress research and the interpretation of results in terms of the adaptive and/or maladaptive nature of the response are discussed. Copyright © 2011 Elsevier Ltd. All rights reserved.

Peter Barnes (2013)
Reduced responsiveness to the anti-inflammatory effects of corticosteroids is a major barrier to effective management of asthma in smokers and patients with severe asthma and in the majority of patients with chronic obstructive pulmonary disease (COPD). The molecular mechanisms leading to steroid resistance are now better understood, and this has identified new targets for therapy. In patients with severe asthma, several molecular mechanisms have been identified that might account for reduced steroid responsiveness, including reduced nuclear translocation of glucocorticoid receptor (GR) α after binding corticosteroids. This might be due to modification of the GR by means of phosphorylation as a result of activation of several kinases (p38 mitogen-activated protein kinase α, p38 mitogen-activated protein kinase γ, and c-Jun N-terminal kinase 1), which in turn might be due to reduced activity and expression of phosphatases, such as mitogen-activated protein kinase phosphatase 1 and protein phosphatase A2. Other mechanisms proposed include increased expression of GRβ, which competes with and thus inhibits activated GRα; increased secretion of macrophage migration inhibitory factor; competition with the transcription factor activator protein 1; and reduced expression of histone deacetylase (HDAC) 2. HDAC2 appears to mediate the action of steroids to switch off activated inflammatory genes, but in patients with COPD, patients with severe asthma, and smokers with asthma, HDAC2 activity and expression are reduced by oxidative stress through activation of phosphoinositide 3-kinase δ. Strategies for managing steroid resistance include alternative anti-inflammatory drugs, but a novel approach is to reverse steroid resistance by increasing HDAC2 expression, which can be achieved with theophylline and phosphoinositide 3-kinase δ inhibitors. Long-acting β2-agonists can also increase steroid responsiveness by reversing GRα phosphorylation. Identifying the molecular mechanisms of steroid resistance in asthmatic patients and patients with COPD can thus lead to more effective anti-inflammatory treatments. Copyright © 2013 American Academy of Allergy, Asthma & Immunology. Published by Mosby, Inc. All rights reserved.