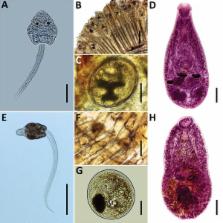 We investigated the transmission of the fishborne trematodes Centrocestus formosanus and Haplorchis pumilio by Melanoides tuberculata snails in Peru. We report on results of experimental, morphological, and molecular approaches and discuss the potential risk for future human cases, given the existence of food habits in the country involving the ingestion of raw fish.

D. Timothy J. Littlewood,  Vasyl Tkach,  Timothy Kinsella … (2003)
Phylogenetic interrelationships of 32 species belonging to 18 genera and four families of the superfamily Microphalloidea were studied using partial sequences of nuclear lsrDNA analysed by Bayesian inference and maximum parsimony. The resulting trees were well resolved at most nodes and demonstrated that the Microphalloidea, as represented by the present data-set, consists of three main clades corresponding to the families Lecithodendriidae, Microphallidae and Pleurogenidae + Prosthogonimidae. Interrelationships of taxa within each clade are considered; as a result of analysis of molecular and morphological data, Floridatrema Kinsella & Deblock, 1994 is synonymised with Maritrema Nicoll, 1907, Candidotrema Dollfus, 1951 with Pleurogenes Looss, 1896, and Schistogonimus Lühe, 1909 with Prosthogonimus Lühe, 1899. The taxonomic value of some morphological features, used traditionally for the differentiation of genera within the Lecithodendriidae and Prosthogonimidae, is reconsidered. Previous systematic schemes are discussed from the viewpoint of present results, and perspectives of future studies are outlined.